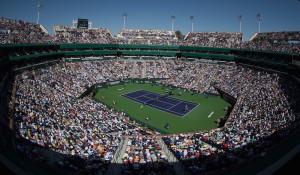 A capacity crowd of 16,000 fans watch the BNP Paribas Open semifinal match between John Isner of the US and Serbia’s Novak Djokovic of Serbia at the Indian Wells Tennis Garden on March 15, 2014 in Indian Wells, California. (Photo credit: JOE KLAMAR/AFP/Getty Images)

With the broadcast of the ATP World Tour currently spanning across 190 territories and reaching a staggering 973 million fans, the increase in ATP Media’s current production model is designed to accommodate for the ever-evolving popularity of the ATP World Tour. The model premiered at this year’s BNP Paribas Open in Indian Wells, where all 95 ATP singles matches and 21 doubles matches were produced live across eight courts.

ATP Media currently provide exclusive broadcast packages to 75 broadcasters globally, encompassing 23 tournaments around the globe that comprises of nine ATP World Tour Masters 1000 events, thirteen ATP World Tour 500 events and the season-ending Barclays ATP World Tour Finals. This latest announcement is a further demonstration of the forecasted $300m re-investment into television production that ATP Media will make over the next 10 years, seeing more matches than ever produced from the top two tiers of the ATP World Tour.

Stuart Watts, ATP Media chief operating officer, said: “As the global appetite for the ATP World Tour continues to grow, we feel that it is our responsibility to evolve the viewing experience and ensure that the tour remains as accessible as possible. We pride ourselves on providing the benchmark for global sports broadcast coverage and reinvesting back into tennis, both from a production and accessibility perspective. This allows us to continue to accommodate for the year on year popularity growth of the ATP World Tour worldwide.”

Chris Kermode, ATP executive chairman & president, said: “These enhancements to ATP Media’s world class production at the ATP World Tour Masters 1000 events is terrific news for the Tour. We are in the content business and our athletes continue to drive record interest in our sport. ATP Media’s increased level of production will allow broadcasters and fans to engage with more of our content from our top tier of events than ever before.”