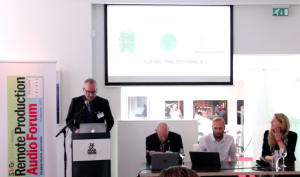 At the inaugural Audio Forum event on 14 September, representatives of Calrec, Net Insight and Dome Productions spent an hour exploring the outlook for remote production audio in broadcasting. The illuminating session – which was sponsored by Calrec and supported by Resolution Magazine in its role as media partner – took place at the DeLaMar Theatre in Amsterdam before the Sport Production Summit.

The impetus for the session – and the starting point on the day – was a newly-written white paper produced by Calrec, entitled ‘Remote Production: Going the Distance’. Echoing some of the key points of that document, Calrec Audio director of product management Henry Goodman depicted a broadcast landscape in which there is a desire “to provide more live event coverage, live news, concerts, theatre and especially sports as it attracts a large and dedicated TV consumer base. The challenge, then, is to produce more live coverage. There are plenty of smaller sporting events which are not financially viable to cover with a traditional OB production approach.”

Correctly implemented, continued Goodman, remote production offers the opportunity to reduce the movement of people and equipment; increase the utilisation of equipment; reduce on-site set-up times; and maximise the efficiency of production teams. Historically, though, there have been three major barriers to successful remote production, namely: “Latency and how you mitigate it; control and how you extend workflows to the venue; and general infrastructure issues, such as how raw video and audio are transported back to base.”

In terms of audio transportation, one of the most important factors to be borne in mind is that “audio signals are much more sensitive than video signals [so] sync and lossless transport are key to prevent any glitches in the stream”.

In order to address this problem, Calrec has recently developed the RP1. A 2U single box solution, RP1 provides local DSP to enable the generation of monitor mixes and IFBs with no latency. It gives an operator in a remote studio direct control over channel functions, such as mic gains, aux send/monitor mix levels and fader levels. It also provides a mechanism to embed audio into existing backhaul technologies, such as SDI or SMPTE 2022.

RP1 also allows broadcasters to create low-cost on-site Hydra2 networks for all audio routing environments. To which end Calrec has also partnered with Net Insight to achieve an integration of the latter’s Nimbra platform to provide simple connectivity, quality assured transport and precise control of audio mixes from any location. The two companies have worked together to optimise Calrec’s Hydra2 audio and control protocols with the Nimbra platform and enable seamless connectivity on-site with no synchronisation issues.

The origins and outlook for the collaboration were addressed in a conversation between Goodman, Calrec Product Manager Peter Walker and Larissa Goerner, who is strategic product manager at Net Insight. “Our aim is to make remote production easy, offering broadcasters a complete tried-and-tested solution. With a strong partner such as Calrec and its RP1 we can close the gap in terms of audio challenges,” said Goerner, pointing to a fully integrated solution able to connect via analogue, AES, MADI, SDI, AES67 and SMPTE 2022.

This part of the session was closed out by a conversation with Alan Karloff, manager engineering services at Dome Productions, which is a mobile production company that broadcasts various major televised productions all over North America. Karloff outlined several trials that had taken place in recent months, all based around SDI-oriented workflows, although IP production is certainly on its radar for the future.

In the final part of the session, Goodman offered his thoughts on the current and future outlook for remote production audio. Perhaps most importantly, it should be regarded as a possibility today rather than tomorrow, with some broadcasters already implementing impressive remote production workflows. For example, noted Goodman, PAC-12 in the US last year covered well over 300 college sporting events by bringing raw video and audio feeds back to their studio facilities in San Francisco over their existing inter-college IP infrastructure.

Goodman observed: “We established early on the key principal of mixing and generating IFBs locally at the venue to avoid the latency issues inherent with getting in-ear monitors feeds from venue to studio and back to the venue. The Calrec RP1 unit places the processing power at the venue to achieve this.”
Drawing attention to the availability of the white paper (which can be downloaded in full here: https://calrec.com/going-the-distance/), Goodman affirmed that “remote production is already here, [and] many broadcasters are already reaping the rewards it offers for a wide spectrum of live productions. In my view the technologies and workflows we have discussed here represent second generation Remote Production, providing broadcasters with a complete, proven and easy way to generate significantly more live content.”

In closing, he emphasised the importance of close cooperation with all stakeholders in a broadcast event and quoted the words of Gordon Roxburgh, technical manager at Sky Sports, who said: “The key hurdles are no longer technical; we can tick all of those boxes now. The critical steps to a remote production being a success is to work with the production teams and all the key stakeholders at the planning stage to ensure that the boat is going to be sailing in the same direction.”

SVG Europe will return to the subject of remote audio at the second annual Next Generation Audio Summit, which is a co-production with Dolby and will take place at their Soho Square, London, facilities on November 9. For a full programme, and details of how to register, please visit https://www.svgeurope.org/audio-summit-2017/.