Audio Ga Ga: Flurina Hunkeler on evolving ambitions from being a rock star to an OB sound engineer 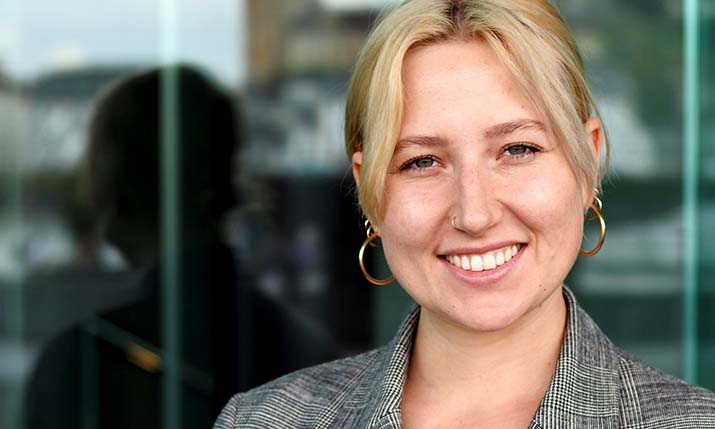 Flurina Hunkeler: “I had to work hard to get where I am but it’s possible.”

“I wanted to become a sound engineer from the age of 14 years old,” says Flurina Hunkeler, freelance sound engineer. “I have been obsessed with music ever since I can remember. I told my teachers when I was 10 that I didn’t need any more education in order to pursue my chosen professional career as a touring musician! Somehow that dream didn’t change much, only from being a musician to being a sound engineer.”

Hunkeler’s first big job in sports broadcast was the somewhat prestigious gig of Euro 2016 in Paris. She was assistant audio engineer in the Remote Interpretation Centre (RIC) in the IBC. While she had already had some work experience in audio at a small radio station, at the Euros she was tasked with aiding stadium crews, translation – she is fluent in three languages – and generally learning as much as possible.

She comments: “Paris was my first job abroad; amazing city. I had also never been to a huge football stadium like Stade de France, so it was all very impressive. In the first days I was in the stadiums helping our crews with the French stagehands. I had to translate because our crew in the stadium couldn’t speak French and the French couldn’t speak English or German. I was also helping mix the simultaneous interpretation for the press conferences in the IBC. It was funny and crazy! On top of that we were flying 70 L-Acoustics subwoofers into the roof. The dimensions were so much bigger than anything I had seen so far.”

Yet, she continues, there were challenging moments: “In the RIC it was not always easy for me; I was very interested and motivated to learn but one of my colleagues, a senior sound engineer, wouldn’t let me be at the mixing desk, so I started to do all the administration work, made schedules, etc. I still sometimes find that people don’t want to help me learn; it’s like they don’t want to help you improve, and I really don’t understand where this is coming from. But back then I was too young to fight.”

Still, Hunkeler continued to pursue a career in audio. She comments: “I love sports, but I can’t say I used to care much about watching sports. But I love emotions. Standing in sold out football stadiums, pushing the button to play the walk-in anthem, the fans standing up with proud faces for some guys running after a ball; all great moments.”

“But more than that I love the complex systems used for the broadcasting. It’s all similar to the equipment on a stage for a festival, but one hundred times bigger and more complex. I am a logical thinker and I like to find creative solutions for a problem, so this complexity suits me,” she adds.

While Hunkeler was always clear on her goal, finding a route into the industry wasn’t so easy.

“When it was time for me to choose an apprenticeship, there was no sound engineering apprenticeship back then in Switzerland,” she recalls. “I was too young for an internship when I finished high school at 15 so I did music A-Levels. I quickly realised that I didn’t wanted to study music – I didn’t like to practise and I was in jazz college, a bad combination.”

Hunkeler took the decision to move schools and study more general A-Levels, giving her a good grounding in fields such as physics, languages and music. When she was 18, she found an internship in a venue and started working as a freelance sound engineer in several venues and for festivals all around Switzerland.

“After A-Levels I went to the Ffton, the technical college for sound engineering in Zurich. The school was amazing,” she enthuses. “Sometimes we had intense study weeks where we would play around with PA system design. We went to Berlin for lectures at the TU Berlin about wavelength synthesis, we went to the Dolby Atmos mixing studios, to the Stage Tec factory, the list is long. I couldn’t have wished for a better education.”

Hunkeler spent the next few years working her way up in the live sound business until she realised she needed a break from the sector and the world of sports broadcast came calling.

“At this point in my life everything was about audio, this was too much for me – I needed space from the music industry,” she says. “That was when I started working more in sports broadcast. I started working more with audioconsulting ag, who I worked with on the Euros. My new roles were working as a sound operator for the PA and in-house TV for FC Basel in the St Jakob Stadium and at Blue TV doing sound for the live sports shows. I still work for the same company.”

“I never saw myself working in a TV studio, I always thought it was a bit boring,” she admits. “But over time I started to really like it. When you go live it gets pretty hectic in the operating room, you have to listen to all the tops from the producers and directors, and at the same time adjust the sound quality. It’s a fun job and the team is great. Over the years I got to know my colleagues and they all have very interesting lives. I guess it attracts a certain kind of person, all very adventure-loving people like me.” 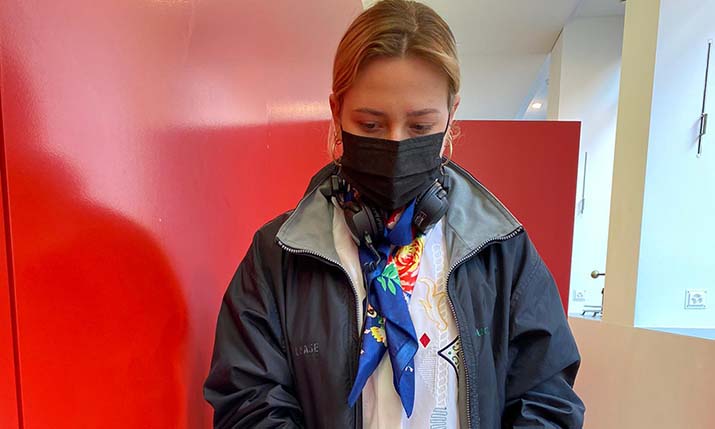 “Doing sound in broadcast is not a glamorous job, but it’s a great way to make money. The pay is great, there is always work and it’s always high-profile work. It also gives me a freedom in life not so many people have,” says Flurina Hunkeler

Throughout her career, Hunkeler has thrived on being challenged and having to find creative solutions. She recalls an early experience at Swiss youth radio station Radio 3Fach, where she worked as a sound engineer.

“Back then we had very little budget, but big ideas. We wanted to do everything, broadcasting all the festivals in the area. When something was happening in the city we packed our portable radio studio and went there to make radio on-site. It was all a bit wild but very fun.

“When I started this job, there was a big change going on. ISDN was about to be cancelled and while it was still possible to order an ISDN line it got very expensive. Since we didn’t have any money, I had to find a solution. That solution was IP codecs, although nobody was using them at the time. 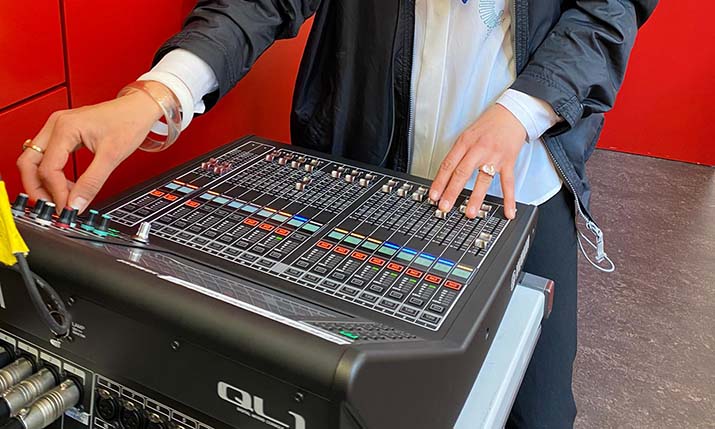 “I had a friend who was a network specialist at Radio 3Fach and together we found creative solutions to broadcast with audio over IP using any kind of internet connection. Using internet lines meant the problem of firewalls came up, but as we didn’t have any budget, we had to use anything available at the venues, so we programmed a little device that helped us to sneak around the firewalls. That’s when I got hooked on broadcast systems.”

Hunkeler has also faced challenges due to the lack of diversity in the industry. “It took me a long time to realise how much being a woman probably made my path more difficult,” she says.

“I always left when I wasn’t happy in a place anymore. One day I had kind of a déjà vu moment, where I realised that it always got hard for me when I was ambitious. Every time when I was working harder than everybody else my bosses or/and colleagues wouldn’t let me grow, or just in baby steps, even when I was ready to do bigger steps. Thinking back, I know this happened in about 80% of the places I worked at.”

She feels the pressure associated with the job and the constant need for perfection is some of the reason behind the lack of diversity.

“The job comes with a lot of pressure. Maybe I feel this a bit stronger than others because I always worked as a freelancer, so if I make a mistake it means I might not be booked the next time. I got used to this, but sometimes it was hard. Over the years I learned to leave my feelings at home when I go to work. It sounds very harsh but when I work in broadcast I am just a tool.”

Despite this, Hunkeler enjoys the lifestyle the industry offers her. “Doing sound in broadcast is not a glamorous job, but it’s a great way to make money. The pay is great, there is always work and it’s always high-profile work. It also gives me a freedom in life not so many people have. I decide when I work and when I take time off to surf, snowboard or just spend time with my family and friends.

When it comes to being successful in a male-dominated sector, she advises: “Men tend to underestimate woman, everywhere. Don’t let them make you doubt yourself and your ability. Unfortunately, this means you will always have to work harder than everybody else. When you do make a little mistake, as a woman you will not hear the end of it; if it’s one of your male colleagues doing the same or a worse mistake, nobody cares. This is the most frustrating thing and it’s really draining, but never give in.”

“I especially hope I can motivate more woman and people from all origins to join me in sports broadcast. It’s very much time for a radical change”

Looking ahead, Hunkeler has her eye on more big events such as the Euros and the World Cup. “I like the idea of working a big event every year; a few weeks of intense work, that’s when I am most happy, when it’s really intense. In the far future I want to become a system designer in sports broadcast. That’s the part that fascinates me the most in broadcast, the system behind it.

“To become a great system designer, I want to work in all positions as an audio engineer in sports broadcast first, so I can learn what is important and about the workflows, the challenges, where improvement is needed and so on.

“I had to work hard to get where I am but it’s possible. I hope I can inspire some people with my lifestyle. I especially hope I can motivate more woman and people from all origins to join me in sports broadcast. It’s very much time for a radical change.”