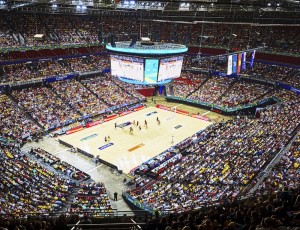 Qudos Bank Arena has partnered with Daktronics to construct a 12-display centre-hung LED video display system – the largest in the southern hemisphere – using 180 portable LED panels for the eight main displays that can be taken down and used in any configuration for any of the multiple events hosted by the facility in Sydney, Australia.

The displays are capable of variable content zoning which allows each to show one large image or each can be divided into multiple zones to show any variety of live video, instant replays, game statistics, graphics, sponsorship messages and other event information.

“This project was a challenge that our engineering team was eager to accept as we worked closely with the Qudos Bank Arena operations team to design and install a world-class multi-sport centerhung display system,” said Blair Robertson, Daktronics regional manager. “This type of project fully engages every aspect of our business and highlights Daktronics as the industry leader in the LED display industry. I’m proud to be a part of such a magnificent project that truly is spectacular to see in person.”

On the underbelly of the centerhung, two displays measuring 1.90 meters high by 3.49 meters wide and featuring 6-millimetre line spacing will be angled towards the sides of the arena to appeal to the seats closer to the action.

Additionally, the arena received four digital scorer’s tables to place in any configuration along the side of the playing area. Each of these displays measures .63 meters high by 2.22 meters wide and features 6-millimetre line spacing to show additional graphics, statistics and sponsorship messages throughout events.