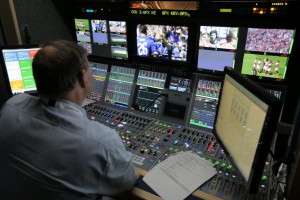 BT Sport and Timeline recently collaborated on the build of a bespoke OB vehicle with a 4K production workflow featuring a number of technology firsts, including a new range of 4K signal processing and distribution tools from Axon. BT Sport launched Europe’s first live sports Ultra HD (4K) channel, BT Sport Ultra HD, in early August, with its first live broadcast being the FA Community Shield match at Wembley on August 2 between Chelsea and Arsenal.

Developed in close cooperation with BT Sport, Axon’s Synapse 4K Production Tool Boxes (U4T100 & U4T140) ease the challenges of a 4-wire production setup by carrying Vanc and Hanc data such as timecode and embedded audio. The U4T140 also provides a Dolby E encoder and decoder. The team also worked together to develop a new card (GDR416) to accommodate 4K signal distribution in the Timeline vehicle.

“The Synapse 4K cards Axon developed and custom-built for us intelligently manage embedding and line routing,” said Dan McDonnell, Timeline Television’s MD. “Our delivery schedule was tight, but Axon met the deadline and provided us not only with the functionality we needed but also excellent technical support. With their expertise, we were able to produce a 4K football match to the same quality of HD and showcase the best immersive viewer experience.”

Other Synapse modules deployed include 4K up-converters and down- converters. All other Synapse video processing units supplied are capable of handling 3Gb/s signals. A number of these video-processing modules have been executed with fibre-enabled I/O-panels, allowing conversion from video to fibre without the need of additional equipment. To handle Dolby requirements in the truck, Axon also supplied the Synapse DEE28, a multi-format Dolby stream decoder and Dolby E encoder with voice-over module.

“We used Cerebrum to control all of the matrix, multiviewers, tally, all of the glue and lots of other pieces in the production chain, all via 10-inch touch-screens. I believe that we’re the first OB company to replace hardware with touch-screens and really embrace advanced control,” explained McDonnell. “It’s enabled us to do complicated routing with ease – just with a press of a button. Cerebrum is an amazing system.”

Commenting on the project, Axon’s CEO, Jan Eveleens, said: “For a long time our industry has been talking about the rollout of Ultra HD, so we’re proud to be a key partner in the delivery of this game-changer in sports broadcast. And with more companies seeing the benefits of Cerebrum control in mobile production, we’re thrilled to see our technology playing a central role in the coverage of many of this year’s major sporting events.”