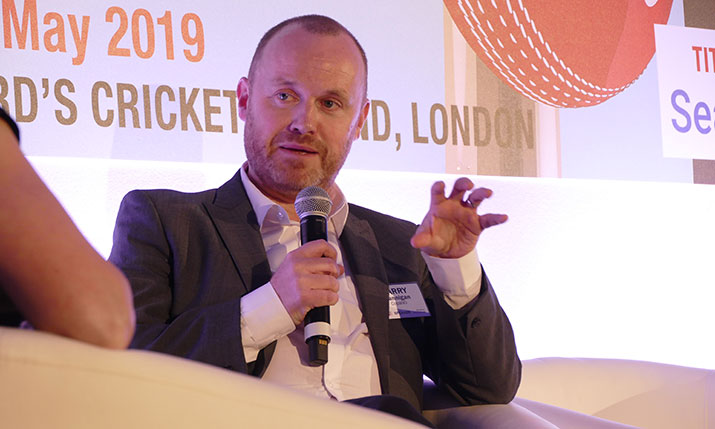 Barry Flanigan, then at COPA90, was among the speakers at SVG Europe’s SportTECH event in London in the summer of 2019

Starting immediately and reporting to managing director and founder Lawrence Duffy, Flanigan will lead the business development and strategy function at Aurora.

He will focus on driving new business as well as working with existing clients while further enhancing and building out the company’s digital service offering.

Flanigan brings over 20 years of digital media experience to Aurora having worked in senior roles at several media companies. At COPA90 he was chief product officer overseeing all product, audience, data and content operations.

He helped to build the business into a global football media house reaching millions of fans, working with top tier sponsors and managing major events, including the 2018 FIFA World Cup.

Prior to this, he was vice president and part of the founding management team at Brave Bison, scaling the video network to generate more than 3 billion views per month. He has also held executive roles at Telegraph Media Group, News Corp and AOL.

Flanigan commented on his appointment: “Aurora has an incredibly strong reputation for creating compelling sports and entertainment content experiences and I’m excited to build on these strong foundations to further enhance Aurora’s service offering for partners and clients around the world.”

Aurora has a strong track record in the development and production of live, premium global sports and entertainment events, helping clients develop original and compelling programming, with a client list that includes rights owners such as Formula E, Extreme E and Goodwood, among many others.

Duffy said: “Barry brings a real wealth of digital expertise to the Aurora team. He has an extensive track record working with some of the biggest and most innovative rights owners, broadcasters and brands in the world to grow engaged fan communities. His skills are an excellent fit with Aurora’s mission to create brilliant content for fans at the intersection between live sport, digital, data and brand. We’re delighted to welcome him to the team”