BBC explores audio technology progress at Now and Next conference 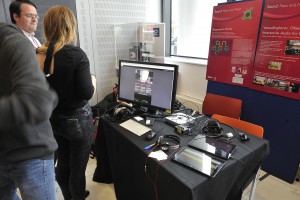 BBC R&D and its partners showcased recent developments at Now and Next, including the Venue Explorer interactive audio/video system for live events

The development of broadcast technology in recent years has been as much about adding new dimensions to the viewing and listening experience as creating new technologies. Sports broadcasting has been at the forefront of this and audio has played a major role, primarily through 5.1 production but also alternative commentaries and languages. All this featured heavily at last week’s BBC Sound: Now and Next conference, which aimed to look at the future while also examining the state of the art today.

“We’ve had almost four years of the Partnership and it is delivering results now,” Melchior said in his welcoming remarks. “It is time to take [technologies] to the next stage and begin to deliver new experiences to the audience.” He added that these would be for a range of TV and radio programming, including music and drama, but the two-day event got underway with more focus on live production and sport in particular.

Freelance sound supervisor Bill Whiston took From Surround to Immersive as his subject, looking at the different multi-channel formats available and the techniques for capturing and mixing them. Whiston worked with BBC Outside Broadcasts and then SIS Live, before more recently setting up his own company, Five One Audio. The name is fitting as he was in charge of the first 5.1 broadcasts of Wimbledon for BBC Sport in 2006.

Whiston commented that he first became interested in advanced surround sound after hearing a demo of Ambisonics during the early 1980s. “The surround was quite impressive, but with the height Ambisonics added it was doubly so,” he said. Since helping to establish 5.1 in TV sport, Whiston has also been involved in test transmission of 22.2 spatial sound in conjunction with Ultra HD pictures. “It adds layers so that you can hear what is rumbling underneath you,” he observed. Whiston added that additional channels and object-based processing also brought the opportunity for a range of commentaries, including those favouring a particular team, as well as accompanying interviews.

Nuno Duarte, audio manager with Olympic Broadcast Services (OBS) looked at the growing scale of production for both the Summer and Winter Games. On the sound side this has seen the introduction of 5.1, following initial tests in 2004, and the subsequent increase in the number of mics required. “We’ve been looking at 22.2 for 8k with NHK,” Duarte said, “and also had remote production and 9.1 at Sochi. It took about four days to rig because of the array needed.”

Duarte posed the question of “what next?” but did not answer it immediately. When asked by SVG Europe what the future might hold, he explained that the introduction of innovative technologies often took a long time and depended on whether the rights’ holders for the Olympics saw a need for them. “It’s going to be a long way,” he said regarding immersive audio.

Responding to a question about the viability of binaural sound, Duarte replied: “There is now less viewing of the Olympics on [conventional] TV and more on laptops and mobile devices, so people are wearing headphones to do that and we could have stereo, 5.1 and other formats that come with the production and transmission side.”

A trade fair ran alongside the conference, with exhibits by DTS, Fairlight, Fraunhofer and Recho. Dolby demonstrated both Atmos Home and Personalised Audio, which uses the AC-4 object-based multi-channel system introduced last year to offer alternative commentaries and language tracks. BBC R&D and its partners also discussed recent developments, including the Venue Explorer interactive audio/video system for live events, which featured at the Commonwealth Games.