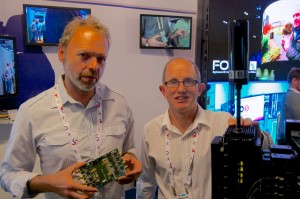 A project designed to fit full HD output into half an RF channel has resulted in a new Ultra HD radio camera system for BBC Research and Development, which it hopes will be manufactured under licence. “We have developed a very sophisticated 4K UHD radio camera system, which we’re using today to transmit [on the 7GHz frequency] and we’re getting 130Mbps in a 20MHz bandwidth. That means you can get great pictures with low latency,” said John Boyer, project engineer, BBC R&D.

“Our minimum latency is four frames, but that is down to our video encoder/decoder, but we can dial in more latency to improve the ruggedness of our link.” If other encoder/decoders prove to be quicker, they would probably switch to them.

When the prototype was shown at IBC, it was only three weeks old, and hadn’t been trialled in any field tests yet. The system has four H.264 encoders, plus four transmitter antennas, with an eight-way receiver, which Boyer reckoned would provide a rugged link over about 500m. “If the right H.265 coders come along, we would probably switch to them,” he added.

“It’s designed to cover a stadium, using the 7GHz frequency, line of sight, so you’d put the receiver antennas up high in the stadium, dot them around, to cover the whole area,” said John Elliot, senior engineer, BBC R&D. “It could equally be a 2GHz system, should we choose to, but we thought 7GHz would be a bit more of a challenge, and allow us to try some new techniques,” added Boyer.

It was shown at IBC on the VideoSys Broadcast stand, because the company wanted to find out what interest there would be in the system, and take out a manufacturing licence for it. “There was quite a lot of interest. A lot of people have been very impressed that we’ve done this and how sophisticated it is,” said Boyer.

It will also fit in with existing RF infrastructure. “We can dial it down to 10MHz and get 65Mbps, so you still have very good pictures.”

Indeed, when the project started it was called Half RF, as the aim was to have good HD pictures using 2GHz in half a channel. “That was giving us 30Mbps in 4.5MHz.” Users can quickly select 20MHz on the unit’s side panel if they want UHD or the highest quality HD, or standard or half channel settings.

“H.264 is a more mature technology, so it is available at a better price, with lower delay,” added Elliot. “H.265 still has a lot of delay, and consumes a lot of power but, obviously, it will evolve, so when it gets to the point H.264 is now, we’ll move to H.265. When we started development on this a year or so ago, we looked at what was available at the time, and H.265 wasn’t.”

Upgrading will be simple, as it uses plug-in modules for the encoder and decoder. The prototype used about 60W, but they haven’t focused on power reduction yet. “That will come down as we improve the design,” said Elliot. “We’ve over-engineered some of the components, and we reckon we can knock quite a bit off that power consumption,” added Boyer.