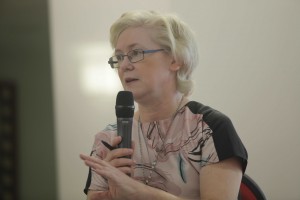 Barbara Slater: “No Director of Sport wants to be responsible for reducing the amount of sport on BBC TV”

BBC Sport Director Barbara Slater said the division is “reluctantly” ending its Formula 1 television contract three years early as part of savings across the corporation. Channel 4 will take on the BBC’s F1 broadcast rights from next season. In a BBC Blog Slater said, “some tough and unwanted choices have to be made” in order to achieve approximately £35 million in savings from the BBC Sport budget.

BBC Sport regained F1 rights from ITV in 2009 but — in another cost-saving move — had been sharing the broadcast rights with Sky Sports since the 2012 season. Recently the corporation also ended live coverage of The Open one year early, moving from to highlights in 2016 as Sky takes over the live broadcast. Releasing F1 and The Open – along with sharing 6 Nations coverage – will also help to “mitigate the super-inflation that is prevalent across the sports rights market,” said Slater.

“The Director General announced recently that the BBC needs to plug a £150 million annual gap in its finances from next year. He outlined that two-thirds of the savings would come from ‘scope’ savings, meaning that the BBC would stop doing some of the things that we currently do.

“BBC Sport was asked to deliver approximately £35 million of these savings. This was due to the pressing need to realise the savings and the greater flexibility that BBC Sport has to deliver them compared to most other parts of the Corporation,” she said.

“No Director of Sport wants to be responsible for reducing the amount of sport on BBC TV. But the current financial position of the BBC means some tough and unwanted choices have to be made. There are no easy solutions; all of the options available would be unpopular with audiences.

“The amendment to the TV rights agreement for the Open Golf (a move from live to extended highlights) and the sharing of the 6 Nations Championship earlier this year contributed to our savings target. These deals also helped to mitigate the super-inflation that is prevalent across the sports rights market.

“And the BBC is announcing today that a significant chunk of BBC Sport’s remaining savings target will be delivered through the immediate termination of our TV rights agreement for Formula 1. Any decision to have to stop broadcasting a particular sport or sporting event is hugely disappointing and taken reluctantly,” said Slater.

“As part of the exit arrangements we are extending our radio rights deal to 2021 and will continue to cover the sport via our sports news service and the BBC Sport website. The package of TV rights we have foregone will transfer to another free-to-air broadcaster.

“I’d like to extend my appreciation to our production team who for seven seasons consistently produced coverage to the very highest level which has been loved by the sport’s fans. It has won numerous awards, including a BAFTA. The quality of production from those behind and in front of the camera has been without equal.

“These are very challenging times for the BBC and sport is not immune to those financial pressures,” said Slater. “We have had to take some unpopular decisions this year but we have done so from a position of strength with long term deals already in place for the likes of the Football World Cup, Wimbledon, the FA Cup, the Olympics, Match of the Day, UK Athletics and the World Athletics Championships, the European Football Championships, Rugby League, Snooker, the London Marathon, the Boat Race and much more,” said Slater.