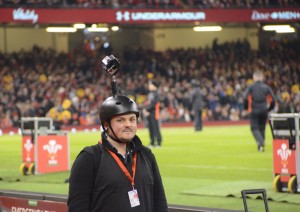 BBC Wales has been wowing viewers of its website with the first-ever 360˚ video shot at an inter-national rugby game. For Wales vs Scotland, the second game of the 2016 RBS 6 Nations Championship, Atticus Digital was at Cardiff’s Principality Stadium to film 360˚ video as part of a VR trial for the broadcaster and as a promo for marketing body Visit Wales.

With 360˚ footage available on the BBC’s online channels, as well as on YouTube and the Welsh Rugby Union (WRU) Facebook page, viewers can choose to watch the players run out of the tunnel, the fireworks around the stadium, or the faces of the 74,000 fans as the teams line up for the anthems.

Based in Cardiff, Atticus Digital has form on the VR side, having worked with BBC Wales on VR coverage of the Cardiff Half-Marathon last year, as well as plenty of promotional 360° videos for events.

“We’ve been doing 360° video for a couple of years now,” says MD Martin McCabe. “But it’s only now becoming popular really due to the take-up from YouTube and Facebook.”

Atticus was asked to capture 360˚ video of the players walking down the tunnel to the pitch and on the pitch during the national anthems.

“We had two separate 360° rigs with GoPro cameras in them for the main experience,” explained McCabe. “We had one at the side of the pitch and one in the centre for the national anthems.”

After capturing the desired pre-game shots the crew then moved around the stadium capturing behind-the-scenes 360˚ clips of the BBC Sport crew in action, including the BBC Sport studio commentary during half time, as well as filming in the tunnel as the Welsh players headed triumphantly for the changing rooms.

The 360° footage from the cameras was stitched together in post-production. “It goes through four different processes, so it’s a bit long-winded,” said McCabe. “We are working on live stitching, which would obviously automate that process and theoretically it could be broadcast live.”

While the gameplay itself is not featured, McCabe thinks it’s just a matter of time before this is a regular occurrence. “We’ve seen a couple of football games covered using 360°, but we weren’t very impressed,” he explained. “They had cameras in the corner flags, but the problem is you’ve got such a wide field of view that you can’t see the action. So the difficult thing is getting on to the pitch – that’s the drawback with a lot of sporting events.”

“We seen VR used in things like the NFL and the US Open,” he added. “It can be easy to get to the action, especially with golf, but it can be very hard to get immersed in the action.”

So, in the not-too-distant future, Atticus is hoping to put a 360 camera on a game referee. “We’ve established that you need a roving point of view,” he explained. “But I don’t think players would want to wear [current] 360° cameras. However obviously they’re going to get smaller and smaller as well. Technology is improving; a Ricoh camera we’ve been trialling is about the size of a bar of chocolate.”

“The technology is quite new and a bit buggy for this, but it is feasible,” he added. “We’ve been testing it and obviously the BBC is keen to explore that area, testing the water and seeing what the response is to this kind of experience.

“One of things we’ve been looking at is the possibility of buying a ticket for the game that’s being covered in VR and being able to choose your viewpoint. Theoretically you could do this once you’re actually in the stadium. So if your team is down the other end, under the posts, you could cut to that camera position. It’s too early at the moment, but I’d say that within the next couple of years it’s certainly feasible.”

Some sample footage can be found at https://www.bbc.co.uk/news/uk-wales-35659718 and https://www.youtube.com/watch?v=FcTHUpuG0pA.