Behind the data: OBS on how it plunged Winter Olympics viewers into immersive experiences with graphics 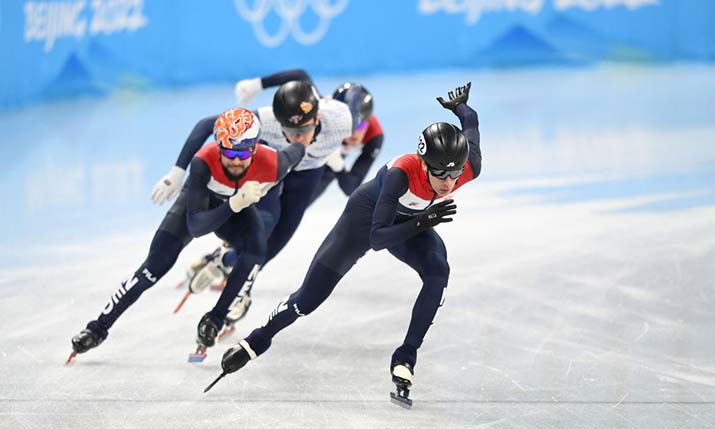 With another Winter Olympics successfully completed, Kim Erdahl, senior graphics manager at Olympic Broadcasting Services (OBS), provides an insight into how the Beijing 2022 games were graphically represented on screen for viewers around the world.

In Beijing, OBS expanded on the use of multi-camera replay systems to provide replays of the action from a multi-angle perspective, enabling fans to have an up-close look at the action from various angles, and experience Olympic winter sports in more engaging ways.

For instance, at the Zhangjiakou National Ski Jumping Centre, such camera systems were installed in proximity to the end of the take-off ramp to capture the first seconds of the ski jumper’s flight.

The multi-camera replays allowed viewers to have a better understanding of how athletes use their body to control the jump, having the possibility to see it from multiple angles.

A total of 10 systems were deployed for Beijing 2022; a significant increase since PyeongChang 2018, where only four of these systems were used to enhance the coverage of figure skating, ice hockey, freestyle skiing and snowboard halfpipe and short track speed skating.

“New technologies give us immersive ways to expand the data, beyond names, times and scores. In that sense, we only use production enhancements that bring value to storytelling and improve the viewers’ understanding, not just for the sake of it.”

Relying on a myriad of high speed 4K cameras, multi-camera replay technology offers the ability to move around the action at any given point of time and watch it from a variety of angles, in near real time. Furthermore, the replay can be paused at different junctures in the motion.

The effect is similar to action scenes in the movie The Matrix where the camera seems to pan 360 degrees around the main actor while he floated in mid-air or dodged a bullet.

The total number of 4K cameras varies from one venue to the other (up to 120 cameras at the ice hockey venues). They have been placed in selected locations for optimal viewing without obstructions.

Spaced at regular intervals on a rig structure, each camera is mounted on a robotic platform capable of precisely panning and tilting the camera in any direction. The camera’s zoom, focus and the platform’s pan and tilt capabilities are controlled from the production unit. For each replay, a single operator selects the point where the motion is frozen and can manipulate the replay from side to side around the athlete, as well as zoom in without losing resolution (thanks to the 4K resolution).

Since the system simply stitches together these feeds and does not have to virtually create filler frames, no rendering is required, allowing multi-camera replay clips to be ready in under five seconds.

For curling and speed skating, OBS has partnered with Worldwide TOP Partner Alibaba to utilise its cloud solution to seamlessly deliver the multi-camera replays. It is the first time that OBS has relied on a cloud-based workflow for replays.

All frames captured by the array of cameras installed at these two venues are sent to an edge server and reconstructed in Alibaba Cloud to generate the replay clips. Those are then up-converted to 4K in the cloud before being sent back to the production unit in the venue compound.

After being successfully introduced at Tokyo 2020 (for the coverage of athletics marathon and race walks, cycling road and mountain bike, aquatics marathon swimming, triathlon, canoe sprint and rowing), OBS used the 2D image tracking (also referred to as athlete ‘pinning’) technology again in Beijing, for all the biathlon and cross-country skiing events. It helped commentators and viewers to keep track of the position of the athletes throughout the event in real time.

Compared to other athlete live tracking solutions that rely on GPS positioning or wireless equipment, 2D image tracking is based on advanced image processing technology that allows motion tracking.

A ‘patch’ (a square) is defined on selected video frames in order to identify each of the athletes. The computer then creates a ‘label’ that is attached to each of the identified athletes and that will be maintained even as the image changes. This captured data is then made available to a graphics rendering platform for on-screen presentation to the viewers, enabling them to know the exact location of the athletes/groups.

Additional data captured using more traditional GPS positioning can be combined with the ‘labels’ to identify athletes, their speed, distance to finish or relative position to the leader.

With their adrenaline pumping and their precisely curved skis helping them accelerate down the course, Olympic downhill skiers squeeze past the gate at incredible speeds.

For Beijing 2022, OBS partnered with Worldwide TOP Partner Omega to extend the live speed measurement for the downhill events across the fastest sections of the course, allowing worldwide audiences to get an insight into the astonishing speeds Olympic skiers achieve.

Speed measurement in the coverage of alpine skiing events was introduced as part of the TV graphics at Sochi 2014. However, until now, the speed was measured from a very specific position and limited to only snapshots, or just a few seconds of data. This was due to the limited sensor coverage available.

For Beijing 2022, OBS, together with Worldwide Olympic Partner and Olympic Games Official Timekeeper Omega, deployed a multitude of newly-developed antennae with increased reception capacity that allow for the capture of more data throughout a much larger portion of the downhill course. The use of such technology also guaranteed an overall better speed measurement in terms of accuracy and frequency of updates.

In collaboration with Omega, OBS offered additional ‘Jump’ data for selected sports and disciplines to commentators, providing them with new levels of jump analysis.

In Beijing, OBS added a new tech-dimension to sports analysis for Curling by introducing visualisation of stone trajectories and new measurements.

A virtual overhead camera allowed unimpeded analysis of stone position, contact points, trajectory and distance between stones for one sheet at a time.