Behind the lens: ZDF camera operator Kerstin Decker on seeing her beautiful sporting images on the screen 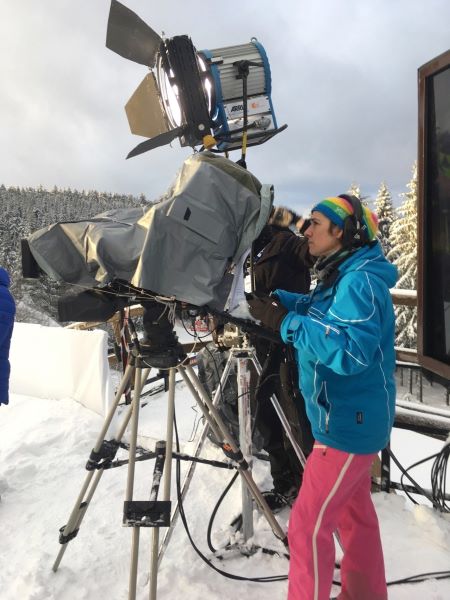 ZDF camera operator, Kerstin Decker, decided she wanted to be behind the lens at the age of 12

ZDF camera operator Kerstin Decker has wanted to be behind the lens since she was a child. Since then that focus and attention to detail have taken her through a multitude of sports, from multiple Summer and Winter Olympic Games to the Tour de France.

Decker comments: “When I was 12 years old, my father brought home a camera, after which I was infected with the idea of becoming a camera operator. Just like in the European children’s series ‘Grisu, the Little Dragon’, who wanted to be a fireman, I said “I’m going to be a camera operator”.

“As for why sports broadcast, I’ve always been fascinated by this area because I’ve done a lot of sport myself.”

After school Decker took on an apprenticeship as a radio and television technician. She then went onto work as a trainee for one year as a camera assistant, followed by a further year employed in a TV production company. After that she went freelance as a camera assistant in the Rhine-Main area of Germany, which is when she started working for ZDF.

On working with ZDF, Decker says: “The first job I remember at ZDF was a documentary (45 minutes long,) where I was allowed to operate the second camera from time to time. I was just in my early 20’s. It was great to be on a business trip for three weeks and learn so much; it was a wonderful feeling that filled me with pride.

“After a very short time I was made the permanent camera assistant of a camera operator at ZDF, who shot sports coverage almost exclusively. We covered the entire tennis ATP tour with our camera, even in the days of Boris Becker and Steffi Graf; but also many other major sporting events such as swimming world championships, Formula 1, golf and athletics.

“In 1997 he made sure that I got a permanent job as a camera assistant before he retired,” Decker reminisces. “From 2002, I worked as an EB camera operator at the Tour de France and as a live camera operator at the Biathlon in winter. From then on (until the pandemic), I was at all the Olympic Games, both Summer and Winter, and several European and World Swimming and Athletics Championships.”

“I decided to take on this job because the sport of Biathlon and its live TV coverage is very close to my heart. I´m excited about the new challenge,” she adds. “I won’t have a camera on my shoulder for five months of the year and it’s good for my health.

“It wasn’t difficult for me to get the job because all my colleagues and my superiors were very supportive,” Decker continues. “One season I ran parallel with my predecessor and looked over his shoulder [to learn the ropes]. The next season we did it the other way round and he still gave me advice and support.”

Decker comments on how things have changed in recent years for camera operators: “The TV viewers are still expecting more and more innovations in live sports broadcasting. In order to meet this expectation, you have to use more and more technology in a really sensible way and more special equipment such as camera cranes, high speed cameras, tower cams, spider cams. We in the Biathlon also have the special requirement that we present augmented reality (AR) outdoor in the snow, in all weather conditions.

“What excites me about my career is that I never stand still but have to reinvent myself and my work on every production.”

She adds: “Under the Corona conditions during the last two years, the completely new situation of doing sports broadcasts without an audience had to be mastered. In 2022, my focus will be on the Biathlon World Championships in Oberhof, Germany, which takes place in February 2023. Planning and preparing everything for this will keep me busy throughout the year, between the normal major sporting events, such as the finals in Berlin or the summer Biathlon World Championships in Ruhpolding.”

She adds: “The coolest job in my career was to be host broadcaster for the Biathlon World Cup in Oberhof and Ruhpolding with over 40 cameras.”

On the challenges she faces regularly at work, Decker says communication is key: “The biggest challenge is to mediate between the different trades; it is not always easy to fulfil the director’s wishes and at the same time justify the costs of doing so to the production. Also, the colleagues from the technical department have to be enthused for the realisation of the [director’s] concept.”

She goes on: “But I like a new challenge and it fills me with a bit of pride when decisions I have made contribute to a complex set up with all the many trades working smoothly together to create a great live broadcast with beautiful images guaranteed as a result.”

Other challenges have been more about Decker’s “joyful” approach to her work, which has taken precedent over the self-promotion of her skills as a camera operator.

She explains: “I have already worked as a camera operator for around 10 years, although I was still a camera assistant, and as a woman I was sometimes overlooked by my male superiors. While male colleagues like to put themselves in a favourable light with our superiors with the work they have done, as a woman I simply do my work with a lot of joy and fun. I then try to find a way for myself to be satisfied with the work situation.”

As to what advice she would give to newcomers in this profession, Decker says: “Never personally think about doing this job as a woman, but realise your own ideas and wishes in such a way that you have fun and enjoy it yourself.

“I believe that then the gender question is not that important, because then you can get everyone on board and inspire them for your project. Just stay true to yourself and don’t focus too much on others, because the others are doing their own thing; focus on yourself.”