Behind the scenes at France’s new highly-specified U Arena 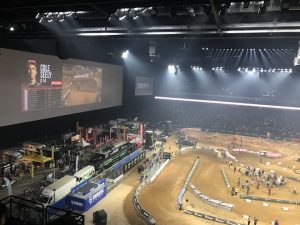 The U Arena, which opened on 16 October 2017, is a scalable and multipurpose stadium for sports events and concerts and is situated in Nanterre, west of Paris and just behind the Arche de la Défense. It is one of the largest stadiums in Europe and can seat almost 40,000 for concerts and 30,000 for sports events.

It is home to Racing 92, the Top 14 French rugby union competition team, and will also host the gymnastics events for the 2024 Olympic Games.

The U Arena is equipped with a comprehensive optic fibre system that connects 10 access points situated around the stadium to the Riedel Micron media distribution network technology. About a dozen video feeds can be received by the video production unit or in the news room.

The production facilities at the hub of the U Arena’s infrastructure are capable of managing the sound system, the building’s interior and exterior lighting, IPTV system,  2 x 100 sqm LED display screens over the court, the LED ring, the video projectors, and live streaming.

The video production system consists of 44 Barco laser projectors with 30,000 lumens light output each. A target mirror is placed in front of each unit and reflects a beam that creates the images for the various U Arena projections. The size of the projected images varies according to the amount of available light.

If the stadium is plunged into total darkness the projector can produce a 1410 sqm image on the main wall as well as on the two 160 sqm screens. A 4000 sqm image can also be projected onto the floor. If the light increases the size of the image decreases as it needs additional resources to produce the required contrast quality. Therefore, at 1800 lux the projection surface on the main wall would be reduced to 580 sqm.

Rugby, but that’s not all…

Although the very first event held at the U Arena was a Rolling Stones concert, sports events will be a regular fixture, including rugby of course – but certainly not only that. In fact, the Supercross motorcycle race that had been relocated to Lille for several editions made its comeback to the Paris area last November and was the first sports event to be held in the stadium. The broadcast service providers Manganelli was in charge of TV production

“We handled the international feed as well as the private feeds for two television channels: AB Moteurs and Motorsport TV,” explained Jean-François Petit, who heads production for Manganelli.

Ten cameras, including two wireless cameras, were used to film the footage, and director Jérôme Ramos also had a camera crane at his disposal.

Jean-François Petit observed: “Footage from our cameras, edited by U Arena’s in-house production team, was projected onto the giant screens, as were the rankings and other real-time stats supplied by ITS-Chrono. Unlike other venues, the paddock area could be seen directly from the grandstands.”

The services available for video production in this new stadium are of high quality. As for the light effects and projection mapping used to enhance the spectator experience, the results are said to. be excellent.