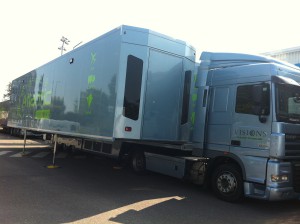 Although there is always great emphasis (and with good reason) on football matches played in the English Premier League, Sky Sports’ commitment to the lower divisions is not inconsiderable. A total of 75 matches from the Sky Bet Football League plus the 12 Play Off semi-finals and all three Finals come under the scrutiny of the Sky cameras. In addition, the broadcaster covers six Johnstone’s Paint Trophy games and 16 Capital One Cup fixtures, including the Final from Wembley.

Recently, Football League clubs received a significant financial boost on two fronts with the news that the League has extended its current broadcasting agreement with Sky Sports and concluded a new ‘Solidarity’ agreement with the Premier League.

The Football League and Sky Sports have agreed a further one season extension to their existing domestic broadcasting agreement covering the 2018/19 season, with the League also having an option to extend the arrangement into 2019/20. The agreement, across its initial four seasons, is the most lucrative in The Football League’s history with 148 matches per season from the Sky Bet Football League, Capital One Cup and Johnstone’s Paint Trophy being broadcast live on Sky Sports. The agreement covers television, broadband internet, Sky On Demand and mobile services.

For the dedicated fans of the lower divisions, their teams are just as important as the Premier League, and although the coverage by the broadcasters may be somewhat scaled down the production is still a considerable operation.

For the League Two match at Luton on Tuesday 24 March, Sky Sports utilised facilities provided by NEP Visions with production centred on its 13.6 metre Atlantic truck.

“League One and Two matches are covered with nine match cameras, with two additional ones in the presentation studio,” reports Andy Holmes, Sky Sports’ production manager for the Luton game. “Unlike Premier League grounds where cabling for cameras and other equipment remains in place for broadcasters, the grounds we visit less frequently need to be rigged each time we use the venue.”

In the case of the Kenilworth Road ground this involves almost 8 kilometres of cables.

“The technical team from NEP Visions arrived on Monday to carry out the rigging process,” says Holmes. “Because the ground was not built with television in mind, positioning the cameras is not always easy. In fact, alongside the manned cameras we have two remote cameras supplied by Aerial Camera Systems mounted on scaffolding and operated from the ACS van parked next to the main production vehicle.”

Again, because venues such as the Luton ground are not used for broadcast purposes regularly, the presentation studio is built on a temporary basis and is big enough to house two cameras. Production of the presentation sequences is handled by the main scanner – a departure from Premier League matches where a separate vehicle and team are usually involved.

Sky Sports used this game to continue its research and development with 4K. “We decided to replace one of the match cameras with a Grass Valley LDX 81,” reports Sky’s technical manager, Robin Broomfield. “Although the output for the game will be HD and it will be used just like any other camera, this will give us a chance to see how the 4K camera performs in a match played under floodlights. The 4k images will not be broadcast live, we’ll analyse them back at base.”

Broomfield says that one of the benefits of the Grass Valley (GV) LDX 81 is its capability to use standard B mount lenses which gives us greater flexibility in the choice of lens we can use.

“This is part of our evaluation process for various 4K cameras,” explains Broomfield. “The Visions vehicle is Grass Valley based, but we have suppliers who use other manufacturers and we will carry out similar tests with alternative cameras over the next few months.”

As the Atlantic OB unit is centred on GV, the switcher used for the football match was the Kayenne Vision Mixer. Other equipment in the production gallery includes an Evertz EQZ Magnum 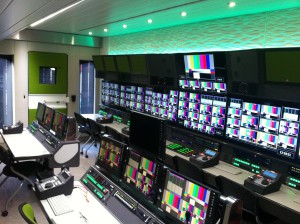 Replays are, of course, an essential part of football presentations these days, and Sky Sports utilises 4 EVS XT3 units for this part of the production. So important is this part of the operation that the Atlantic truck as a separate – and large – area dedicated to replays.

Another key element is graphics. Vizrt is used in the NEP Visions truck and considerable time is spent in preparing graphics showing player details, playing formations, and numerous statistics about recent and historic form of the players.

In overall charge of the production for the Luton game was producer Stevie Rowe, who remarks: “I normally start prepping for a match about three or four days ahead. I look at stories from around the grounds and, if necessary, speak to someone from the teams. Over the years I have built up good relationships and often I can get answers simply by texting the appropriate person.”

Rowe says that the preparation intensifies around the transfer windows so that the whole of the production teams is completely up to date with relevant information.

He continues: “Once I have gathered all that information, I can start preparing a running order for the programme. For a League One or Two game we normally have a 15-minute build-up before the match starts. From the details I have assembled, we can put together a series of questions for the presenter and the guest we have booked for the occasion.”

Alongside that team news and statistics, show openers and interviews with the opposing managers that will be played during the build up sequence have to be shot and edited. In addition, live injects into both Sky’s sports and news channels are sometimes required.

This ‘chat’ between the presenter and guest is supplemented with clips of relevant highlights from various games. In the case of the Luton versus Wycombe game there was discussion between presenter Simon Thomas and studio guest Jimmy Floyd Hasselbaink about the fact that both teams are vying for positions in the promotion battle. Before the game, Wycombe was in an automatic promotion place, while Luton was keen to maintain its slot in the play-offs.

During the game, Rowe provided instructions about which clips and graphics needed to be compiled for the half time break and the end of game analysis. This is supplemented by material required for getting into and out of the commercial breaks.

“Key to all the preparation work is the ‘stats pack’ which was produced by Paul Harrison for the game and runs to between 30 and 40 pages,” states Rowe. “It is prepared with the utmost care to ensure all the facts are correct. There are fans out there who know their team – and the last thing we want is for them to find an error in what we say.”

In addition to the statistics that have been prepared, incidents in the game triggered the need for further details. Rowe then called for information from Harrison who has access to multiple sources that enable the necessary details to be retrieved with some speed.

That package of information is also vital to presenter Simon Thomas. “I can use relevant extracts from that ‘bible’ for my introductory remarks and for moving into and out of breaks. We can look at the record of the teams and a whole host of information that will help build up to the game.”

Thomas says he will also talk to managers to get their insight into the upcoming games. “That level of preparation is vital.”

Director for the Luton game was Sam Gramann. Like most football directors, he cuts cameras during the match itself, but relies on a vision mixer for the replay sequences. “With this number of cameras, there is simply too much going on for one person to carry out both tasks. I have the match cameras on the extreme left of the vision mixing panel, but these are duplicated further along the banks so that my vision mixer also has access to them, as required.”

This arrangement allows the vision mixer seated beside Gramann to activate the fly-ins and outs that are called for during replays.

“Although we do a recee the first time we visit a ground, I always check once a game is scheduled to ensure nothing has changed with the venue that could affect our coverage,” reports Gramann.

The game ended with a 3-2 win for Wycombe, but Luton remains in the current play-offs position.

With the announcement of continuing coverage of the Football League in England, more visits to grounds like the one at Luton will be a regular feature of Sky’s programming plans.