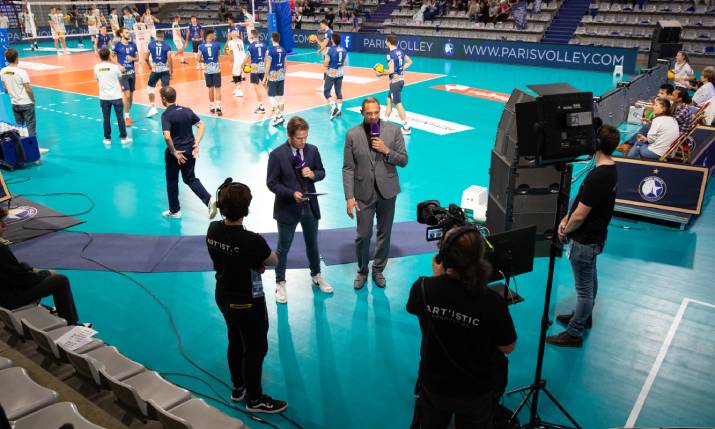 Art’Istic Production has been responsible for providing coverage of the French National Volleyball League (LNV) on beIN Sports since the beginning of the 2022/23 season.

The company’s founder, Arthur Brousmiche, has worked with the French club side Chaumont Volleyball 52 for many years, first as a volunteer, then as a photographer and videographer.

His journey in live sports broadcast started when he streamed the club’s home matches via the online platform LNB TV. “My knowledge of the game quickly allowed me to provide a compelling production despite the limited resources available to me at the time,” says Brousmiche.

A year later at 21 years old, having successfully broadcast the French championship finals a few months earlier, the entrepreneur won a tender with the LNV and beIN Sports.

“The requirements and scale were significantly different, with one game per week, and so I had to equip myself accordingly. The gap between a web broadcast and a premium television channel is huge,” says Brousmiche.

With beIN Sports he supports the planning and preparation of the broadcaster’s editorial content. “With my knowledge of the game, I can suggest sending a cameraman into the locker room to listen to the coach’s talk or to carry out an interview with an in-form player before the match. We don’t just capture and broadcast. We add real value at every step of the way.” 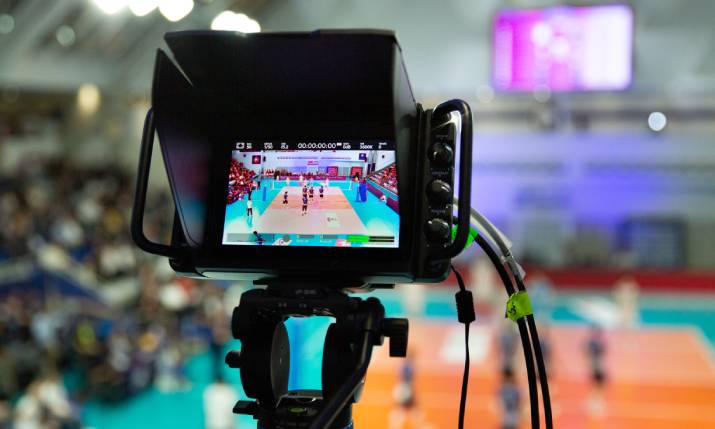 With such diverse needs, and the need to deploy mobile camera operators before and during the game, the versatility of the URSA Broadcast G2 proved compelling.

“We had both control room and camera equipment needs, and very early on, Blackmagic Design emerged as the ideal technical partner. It’s a brand that we know offers excellent value for money.

“The URSA Broadcast G2s are used as shoulder-mounted cameras with operators, positioned courtside. These positions can capture the team talks during time outs while providing close ups of the action on court and the watching spectators.”

With games being played all over France and a significant disparity in the venues hosting the matches, the main challenge was the ability to offer a quality image despite the mixed lighting conditions.

“What I like a lot is the camera’s ability to perform in low-light situations. We tested in numerous gymnasiums, and the image quality is excellent, even when pushing the levels. Likewise, this sport requires a lot of slow-motion replays for television, and the URSA Broadcast G2 meets our expectations perfectly,” explains Brousmiche.

Meanwhile, there is a need to have a set number of fixed cameras, with no movement for the national league, says Brousmiche. “Volleyball is the only sport with a net covered from the courtside,” he notes. “We have one studio camera 4K pro positioned behind a team dugout, giving viewers and the broadcast team a view of player combinations and how the teams set up tactically.” 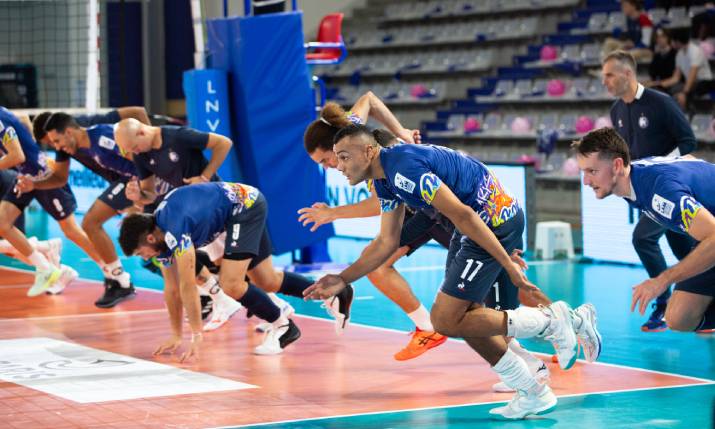 Warming up at the 2022/23 season French National Volleyball League (LNV), being filmed for beIN Sports

Another fixed camera position is located in a corner, providing a wide shot of the venue. “We use this to display scores, standings or other visual layers so that audiences instantly know we are no longer talking about the game itself.

“The studio camera was an ideal fit given the all-in-one design and SMPTE fibre-like workflow over copper ethernet,” explains Brousmiche.

Those positions are each equipped with Blackmagic’s Zoom and Focus Demand and rely on 10GB ethernet for power, video and comms. “Essentially, we can deploy one piece of Cat6a ethernet cable per camera channel on those fixed positions, and we are good up to 100 metres from the gallery. That is then converted back to SDI in the gallery.”

“We get all the benefits of an SMPTE workflow, but at a fraction of the cost using standard Cat6a Ethernet cables.” 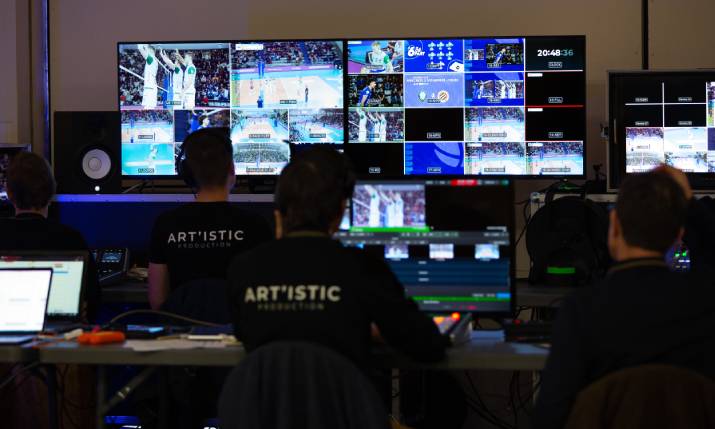 Gallery with a view

When it comes to the gallery, the centre piece of the production workflow deployed by Art’Istic Production is an ATEM Constellation 8K with an ATEM 2 M/E Advanced Panel for hardware control.

“There was a need to invest in a production switcher that was both high performing and competitive in its price bracket and which would give our client full confidence,” says Brousmiche. “In addition, the massive number of inputs and outputs gives us complete peace of mind that it can handle anything regardless of the type of production we deploy it on.

“The transition control features, the multiview, the SuperSource, at a price like that, there are lots of good points. You can have fun with a mixer like this,” says Brousmiche.

All live camera ISOs are monitored remotely and calibrated from the gallery using an ATEM Camera Control.

In addition to recording the programme mix and camera ISOs using multiple HyperDeck Studio HD Mini units, the gallery also provides clean and dirty feeds back to several sources in 1080i50, including the match commentator positions inside the venue and beIN Sport.

“The HyperDecks are also used as a playback source for the in and out credits, as well as pre-recorded VTs and other reports,” he goes on. “Live graphics, including match stats and real time scores, are all supplied as a fill and key signal using a Mac Mini connected via an UltraStudio 4K Mini to the production switcher. The results achieved in such a relatively short time are more than impressive.”

Notes Pierre Hérault, communications manager at the LNV: “We are delighted with the overall product, both from the point of view of image capture and the direction itself.”

Yet Brousmiche adds: “Despite all the positive feedback, we know there is plenty of room for further improvement. This continually drives us to offer more polished match coverage to viewers.”

Art’Istic Production’s intends on moving the OB across to a wholly fibre optic workflow and is exploring the possibility of building a dedicated OB van ahead of next season.

“A few months ago, we didn’t know where to go with an exciting and complex challenge like this,” concludes Brousmiche. “Thanks to Blackmagic Design we have been able to implement a lower cost, high performing broadcast quality workflow.”