Behind the scenes: Sky Sports’ coverage of the British Grand Prix at Silverstone 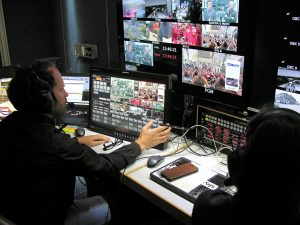 Silverstone hosted the very first Formula One (F1) race in 1950, but in the very week that the 2017 British Grand Prix took place at the circuit, the management revealed that it is considering dropping the event because of increasing costs. Of course, that news in no way stopped the broadcast coverage of the race that went on to be won by Lewis Hamilton after a dramatic last couple of laps for those behind him. And as usual Sky Sports supplied extensive coverage on its dedicated channel. It also provided excellent access to its facilities to SVG Europe.

The actual race, along with practice and qualifying laps, are covered by Formula One Management (FOM) using its own host broadcaster production unit to provide the World Feed (WF). Sky, and the other rights holders, create their own programmes before and after the event and provide their own commentaries to accompany the WF pictures.

Sky Sports in the UK and Ireland first showed Formula One from 2012 and has a package of rights that takes the broadcaster through to the 2024 season. Other rights agreements see Sky Deutschland and Sky Italia also present at the races, providing different wrap around coverage for its own audiences.

“There is a great deal of cooperation between the three Sky teams,” emphasises Phil Marshall, Sky Sports’ Head of Inhouse Production. Prior to taking up that role at the end of the 2014 season, Marshall produced F1 coverage of over 50 races. “Our job is to create the very best programming around the WF. To do that, we work very closely with the Formula One Management. And it works both ways. During my time as producer, FOM asked if they could use our talent – Martin Brundle, Damon Hill and so on – to do the podium interviews.”

Marshall goes on to say that all three production teams under the Sky umbrella have diverse ways of creating their programming. “Different countries have different requirements, but that doesn’t stop the sharing of content. Sky Italia, for example, can obtain very good material from Ferrari in Maranello which can be shared with colleagues. Here in the UK we are fortunate to have six teams located here and that generates a good amount of content.” 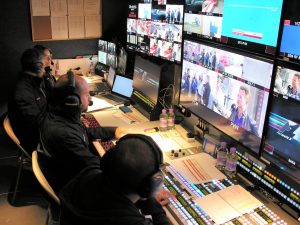 One of this weekend’s producers is Tim Glass. Prior to joining the F1 team, he worked for 10 years at Sky Sports News. “Everyone is very clear on what their individual roles involve. As a result, we have a very slick team for the build-up and build-down surrounding the practices, qualifying and race.”

Glass points out that between races, a great deal of time is spent collecting information, data and news that goes into the ‘facts pack’ that is then made available to relevant members of the production and presenting teams. “The department that collects all that data for us, does an excellent job so that during qualifying, for example, we can display side by side analysis that provide a clear picture of the situations that are developing.”

He continues: “On site, we have a production meeting just after 7am to go through rundowns and any wider issues that need discussing. We talk about what guests we have lined up and, very importantly, how long to spend on each item. That’s because the moment the WF starts, we have to be ready to cut to it.”

Covering so many races each year means that the routines are well established. Nevertheless, there are still times when close cooperation between Sky and FOM is needed – such as when access to certain parts of the track are requested.

The producers and other key members of the team also have regular meetings with FOM in order to provide a process of two-way feedback.

Production control for this weekend’s Silverstone race (as it is with all F1 events wherever the race takes place) was located in three bespoke galleries built in expanding Q6 Aircraft Containers. “These galleries serve not just the UK and Ireland transmissions, but also Sky’s viewers in Italy and Germany,” explains Mike Ruddell, Head of Technology Sky Sports. “These containers arrive on the back of a lorry on the Wednesday prior to the race, and again, because this is a regular operation they are ready for use very quickly.”

Alongside the containers in the broadcast compound are various portable cabins housing Sky’s production offices, MCR, edit suites and the all-important catering facilities.

Alongside those manned cameras, three Q-Balls, one in each of the commentary boxes, are remotely controlled from the galleries. All the production facilities are provided by Gearhouse broadcast.

Each gallery utilises different vision mixers with the UK favouring a Grass Valley Kayenne, Italy a Sony 4ME, while the German operation has opted for a Reality Check Systems Uppercut. In the latter case, Reality Check Systems (RCS) upgraded its Uppercut production system three years ago for Sky Sport Deutschland as part of a three-year engagement that streamlined the broadcaster’s live broadcasts and reduced production overheads.

The team from RCS designed the software to handle all video sources as texture video within Uppercut. This allows for seamless on-screen management and manipulation of 3D video effects – a move that represents a departure from the standard 2D DVE traditionally used in broadcasts.

While the vision mixing options are varied, all three Sky Sports broadcasters have opted for Lawo audio consoles.

Pulling together all the facilities for all three Sky Sports operations is the responsibility of Production Manager Andrew Ferrans. He comes from a background that includes audio engineering and OB unit management, but he is across all aspects of the F1 production and displays a remarkable insight when it comes to both the technical operation as well as the management logistics. During the visit, he was keen to show each of the galleries in operation.

“Although they are located in aircraft containers, the galleries are basically what you will find in any OB. There is room for a producer, assistant producer, director, vision mixer, sound engineer, two VT positions and a graphics operator. And it’s the same in all three galleries, although the personnel may have slightly different roles.”

Recording of the output is handled by two EVS XT3s with eight channels and two EVSXT3 Channel Max with twelve channels. The Sky teams have access to both clean and dirty World Feeds, plus the output from the nine car onboard cameras and six other feeds, including the highlights channel provided by FOM. 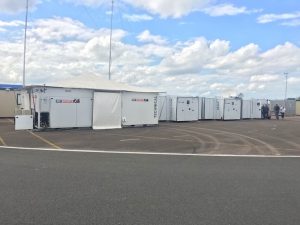 “We are also provided with six data channels from FOM, but these are used purely for information and are not used for transmission. These details are available in the galleries, but also in the commentary boxes located above the start and finish line.”

And that information, together with the off-air monitors, is vital for the commentators. Unlike many other sports where all the action is within sight of the ones describing the event, the only view the commentators get of the cars during the actual race is for the one or two seconds as they race past the boxes.

Ferrans continues: “On race day, we provide unilateral programming up to 5 minutes before the start. At that time, there is a FOM sting and we are required, under rights, to take the WF at that moment. Unless there is a red flag condition or other emergency, we stay with the FOM output until there is a roundup of statistics and a wide shot. During practices and qualifying that rule is relaxed, but we would normally put the FOM action in a box while our presenters discussed some other point.”

All gallery personnel wear headphones as there is no audio monitoring through speakers. That’s because with presenters, commentators and production crew on radio microphones, all communications would be delayed. And that delay would be heard down on talkback and cause difficulties. “Also, 90% of the time we are so close to the track that you wouldn’t be able to hear anything except the roar of cars in the galleries!”

Ferrans points out that Sky is the biggest user of Radio Frequency (RF) at F1 events. “We utilise 37 microphone frequencies, 10 radio cameras, 12 channels of radio talkback and 16 channels of IFB.”

A full RF test is carried out on the Thursday preceding the race to ensure that any interference problems can be minimised.

The ENG crews that roam the paddock comprise a camera operator, floor manager and sound engineer. The audio is mixed at the interview point and sent back to the main broadcast compound using a transmitter pack that have been designed by Sky Sports, but made up of several off-the-shelf components.

Editing for the UK and Italian productions is carried out onsite using Adobe Premier Pro and After Effects. Sky Sports Deutschland sends its content back to Munich for editing at those facilities. After a package has been edited it is tagged and sent to a 500TB central server located in Sky’s onsite compound. From here, all three production teams can gain access to the content.

Once the race is over, clear up begins. Ferrans is keen to point out that the time taken for this operation has dramatically improved over time. “As well as the equipment, we have four to five kilometres of cable to pack away – so there is a great deal of work. We have now got that de-rigging process down to three and a half hours and by early evening the lorries arrive to take away the portable galleries and other kit ready for the next event in the F1 calendar.”

So, all-in-all, a well-oiled operation that will be repeated in Hungary next week, where the race will start with just one point separating Hamilton and Sebastian Vettel. And from there, the second half of the season will continue across four continents with Sky Sports F1 following every twist and turn of each race from every circuit. It promises to be thrilling.