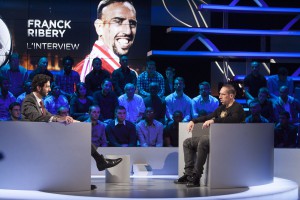 In June 2014, just before the World Cup 2014, the broadcaster launched beIN Sports CONNECT. This is a live streaming service that enables beIN Sports subscribers in France to watch beIN SPORTS 1, beIN SPORTS 2, beIN SPORTS 3 and all 7 beIN SPORTS MAX channels live in high definition directly on their laptop, or on their smartphones and tablets.

“The app, designed to cover the entire beIN SPORTS broadcast line up, provides sports fans and beIN SPORTS CONNECT subscribers across the globe with a revolutionary second screen experience,” said Pichaud. “Fans can now watch all beIN SPORTS broadcasts across all channels via a dedicated video player in full-screen mode or reduce the player size to access the rest of the app’s enriched content with a player that can be dragged and dropped anywhere on the screen – follow all scores, news, video, team and player profiles, and more while streaming live video directly to various devices.”

AMP Visual TV and Imagina are the main providers of OB facilities for the live games of the French Ligue 1 and Ligue 2. Normally, 10 cameras are specified for the fan game played on Saturday night, while 12 will be used for coverage of the second premium on Sunday afternoon.

“When it comes to the premium matches played on Friday evening, we usually use 18 cameras,” said Pichaud. “We regularly utilise the ultra-motion camera that we name the Be–Motion for BeIN exclusive use.” 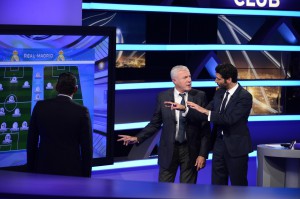 View of the studio with virtual graphics to illustrate team tactics. Copyright: PANORAMIC

Back at the studio, the production team will continue to use a touch screen with virtual TV graphics for more interactivity. Pichaud says that it has proved very useful in showing tactics of different teams. “We use the IP Logger from EVS as our Media Asset Management system,” revealed Bruno Bensimon, the production deputy director. He goes on to say that the recent World Cup allowed new viewers to the channels to experience the in-depth way that beIN Sports covers major live events.

“We proposed an extensive World Cup coverage because every game was important. It was important for beIN SPORTS to offer 24 hours coverage on beIN SPORTS 1, to show team preparation, press conferences and so on. The viewers had the feeling of being taken directly to the action of the World Cup.

“In general,” said Bensimon, “our viewers were aware of the editorial treatment of the channel, because that’s something that we are already doing on Ligue 1, Champions League and Europa League games. On beIN SPORTS, the game begins when the players enter the stadium to change in the locker room.”

In keeping with the thoughts of a number of other broadcasters, beIN SPORTS felt there were far too many replays during the recent World Cup and, as a result, live action on the field was sometimes missed.

As far as progressing to 4K coverage, Pichaud reports that the broadcaster carried out some tests, including transmissions. “But it’s not for us this year. The 4K coverage of the World Cup didn’t influence our decision. It was a great opportunity to appreciate the final result and to observe also some new technologies like 8K coverage proposed by NHK’s R&D department.”