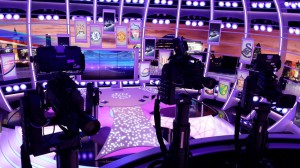 In 2003 Al Jazeera, the Middle East-based media group, set up a dedicated sports network to televise international sporting events to viewers throughout the Arabian Peninsula. In January 2014, the network was rebranded as beIN Sports and its reach was extended so that it now broadcasts to viewers in France, Hong Kong, Indonesia, the USA and all across the Middle East in Arabic, English, French, Indonesian, Spanish and Cantonese.

With its headquarters in Doha, Qatar, the beIN Sports complex is made up of nine separate studios. Head of Engineering Section Muhammad Saeed said: “We have never been busier! There has always been a huge appetite for sport in the Middle East and we are now broadcasting everything from English Premier League football to World Superbikes, international Rugby, European Handball and all the major global sporting tournaments. As a result, our studios have virtually no down time and we have carefully chosen to partner with manufacturers who we know offer a great blend of performance and reliability.”

The studios feature the latest products from Ross Video, most notably Ross Robotics. Studio 9, the largest studio on the site, features a full Ross Furio robotic camera system with 13 cameras that was supplied and installed by regional systems integrator Tek Signals.

One of the most popular programmes broadcast from Studio 9 is beIN’s coverage of English Premier League football on Saturday, Sunday and Monday. Running throughout the day, the live shows feature multiple anchors and guests situated on various sets around the studio, making for a complex rundown.

Ross Furio allows directors and operators to create a variety of dynamic panning shots that help keep the show engaging and vibrant. “Working with Ross Video has been a positive experience and we are very pleased with the results,” notes Saeed. “The Carbonite switchers have proven robust, feature-rich and easy to use and the Furio systems have opened up new creative possibilities for our team of directors.”