Bernie Ross,  the former head of production for UEFA and an advisory board member of SVG Europe has been missing since 18 October. Anyone in our industry who hears from Bernie is asked to please contact Thames Valley Police reference 43170311231. 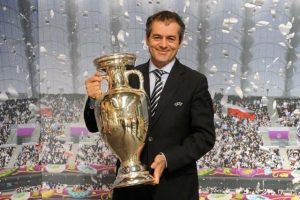 Bernie Ross, former head of production for UEFA and a current SVG Europe advisory board member, has been missing since 18 October.

According to the Oxford Mail, Bernie left the house he shares with his wife and four children in Jericho at 11am saying that he was going to visit his sister in London. However, family later discovered there had been no trip arranged and he has not been seen since. His disappearance was registered with police the next day and the family have been informed that Interpol believe he may have entered France via Calais but Ipad tracking has not ruled out that he may still be in the UK.

Bernie’s wife of 20 years, Jacinta Evans, also appealed for help, saying: “We would be so grateful if anyone can give any information about Bernie’s movements and whereabouts. Bernie has never disappeared like this before and we are intensely worried about him as we know he is not well and was diagnosed with a bipolar disorder following the UEFA Euro 2016 football tournament last year.  We would be grateful if people everywhere would spread the word and ask if they have any information to contact Thames Valley Police reference 43170311231.”

Bernie has been battling a mental-health illness for nearly a year and earlier this year Darren Long, director of Sky Production Services, and others helped establish a fund to support Bernie’s medical costs and living expenses. It raised nearly 60,000 pounds.

“Most people will know or have heard of Bernie Ross, the former UEFA head of production. Bernie is one of the most forward-thinking sports executives in the industry and has been responsible for some of the biggest sporting events in the world, like the UEFA Champions League, UEFA Europa League, and UEFA Euro 2016, along with many more events over the last 11 years. I worked with Bernie on the UEFA Champions League when Sky held the rights for this sport, and I can say that Bernie was always someone who wanted to push technology and move it forward apace and to keep innovating in sport.

“Life sometimes takes some strange and horrible paths, and it certainly has for Bernie and his family. During the summer of 2016 and throughout the autumn, Bernie started to feel very unwell but didn’t really know what was wrong, thinking it was a stomach problem. Unfortunately, Bernie didn’t recognise how bad his illness was, and it got progressively worse just before he left UEFA to join Discovery Networks. Bernie never did start that job at Discovery Networks. Instead, after much investigation for his possible stomach complaint at the John Radcliffe hospital and after a lot of misdiagnoses, they discovered that he was suffering from a bipolar mixed affective disorder.”

Jack Abell, media officer for Thames Valley Police, confirmed officers were investigating the disappearance and were eager to hear from anyone with information.