Best In Show: Sunset+Vine on transforming Crufts and becoming a truly global player 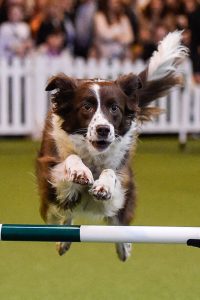 “It’s live and it just happens to be dogs running around rather than footballers or rugby players.”

As his company embarks on another Crufts, Sunset+Vine Chairman Jeff Foulser talks to SVG Europe about transforming the world’s favourite dog show into a major sporting event and reveals plans for acquisitions and further global expansion.

For London-based Sunset+Vine, being a sports producer is anything but a dog’s life right now.

Yes, it currently has a team on site at Birmingham’s NEC arena producing 14 hours of live canine-based television programming, but, as a business, a better comparison would be a dog with two tails.

In addition to Crufts and its regular gigs for BT Sport, covering English Premier League and Scottish Premiership football and Aviva Premiership and Champions Cup rugby, the producer has a team in Dubai doing host broadcast coverage of the Pakistan Super League cricket and another in Zimbabwe doing the same for the Cricket World Cup qualifying tournament.

Next up, having just renewed a contract with Badminton England, is the All England Open Badminton Championships and then, towards the end of the month, the Gymnastics World Cup. In April, Sunset + Vine will be in Australia as host broadcaster for the Commonwealth Games.

For a British company, it is a very global sporting portfolio, one that could be set to expand further. 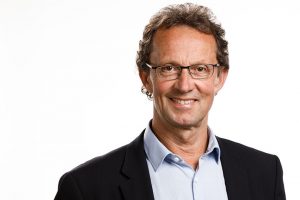 Back in October 2017, the private equity company Vitruvian Partners exited Sunset+Vine’s parent firm Tinopolis after nine-years, selling its 48% state back to management.

It leaves Sunset+Vine with free rein (within reason) to continue this worldwide expansion, through more contracts and, potentially, acquisitions.

“The buyout gives us total control over where we want to go as a group and as a business,” explains chairman Jeff Foulser, chatting to SVG Europe on the eve of Crufts.

“The private equity guys were very good partners. But they were keen to exit, having been in for longer than private equity would normally stay. We were good for them, they were good for us and it was a good partnership. But it was time to move on. We were in a position where we could do that and now we can really focus on being a global business and look at different opportunities in acquisitions or territories.”

Resisting the temptation to compare the move to being let off the leash, Foulser suggests it “feels as if we have released the pressure valve a bit.”

“We can be a bit more nimble,” he adds. “There are always limitations but, essentially, we can do what we want.”

While Foulser is tight-lipped on potential acquisition targets, he acknowledges that host broadcaster contracts, like the one for the Commonwealth Games or the Pakistan Super League, for example, are the way forward.

“That is what we have tried to build the business on in the last four or five years,” he says. “We’ve forced our way into a little clique of companies that cover these big global events. We’ve ruffled a few feathers, which is good.”

“We’re not reliant on any single client, which is a real bonus.”

In an age where broadcasters around the world are competing for rights to the best sporting events, and now even the FAANG (Facebook, Apple, Amazon, Netflix, and Alphabet’s Google) are getting in on the action, they are well positioned to take advantage.

“We’ve become quite a big operation, although I’m not quite sure how it has happened,” he jokes.

“We’re independent and we can be fleet-footed. If a contract moves from one broadcaster to another broadcaster, we can move with it. We’re not reliant on any single client, which is a real bonus. We can work for whoever we want to work for, as long as we can make money from it.”

One of those contracts that they can (presumably) make money from is Crufts.

Not a traditional sporting event per se, the dog breed and agility competition is organised and hosted by the Kennel Club and held over four days at the NEC. According to Guinness World Records, it is the largest show of its kind in the world attracting 22,000 dogs and 140,000 spectators over five days.

Sunset+Vine has been producing coverage of Crufts since 2009, initially as a stop-gap for the Kennel Club after it fell out with the BBC in a row over animal welfare, and then as the production partner for current rights holder Channel 4. 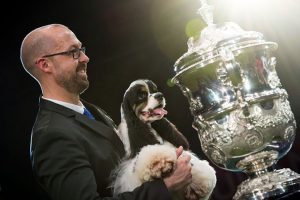 Jason Lynn and Miami, an American Cocker Spaniel, the winner of Best in Show at Crufts 2017

For the 2018 event, 14 hours of live coverage is being shown across Channel 4 and More4. The output includes 60-minute magazine-style shows each afternoon (produced by sister company Mentorn) and primetime coverage each evening from the main arena where the Agility and Flyball competitions, as well as the ‘The Best in Show’ awards, take place.

Coverage is also being streamed 12 hours a day via the Kennel Club website and the Crufts YouTube channel.

As far as the production is concerned, ”we treat it a bit like an athletics event,” says Foulser. “You have a main presentation studio and then there is lots of different stuff going on in the main arena. It is really very similar to a sports event. It’s live and it just happens to be dogs running around rather than footballers or rugby players.”

The HD feed is being produced by a 130-strong crew making use of two presentation studios — one for the daily magazine show and the other for the event coverage — and circa 20 cameras.

CTV is providing OB facilities, supplying two of its largest trucks, OB 11 and OB 10, and eight Sony 4300s including one that will operate in super slo-mo.

“The main arena minicams are incredibly important to our coverage”

Broadcast RF is responsible for two handheld RF systems that are working with Sony PDW700 camcorders. These operate in the arena and studio press areas. It is also providing two minicam HD RF systems that are attached to fences and others obstacles, providing point-of-view shots during the Agility and Flyball competitions.

Three RF cameras are also being deployed across the exhibition halls, including the main arena, and the presentation studios.

CTV’s Technical Producer for Crufts, Alan Jessop, describes the set-up as a “careful marriage of RF and traditional line cameras” adding that the main arena minicams are “incredibly important to our coverage’

In addition to the main event production, two ENG crews will be putting together feature packages and a digital team, complete with mobile editing kit, will produce online clips.

“Technically, it is quite a big operation. It’s as big a live event as Channel 4 does all year,” explains Foulser before highlighting examples of how the coverage has evolved. 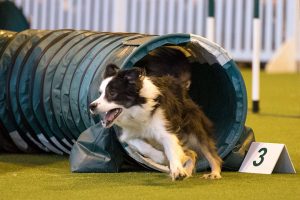 “For Flyball, we’ve introduced clocks and brought in legendary sports commentator Jim Rosenthal. He really lifts the coverage of that discipline. We’ve added more graphics too and we’ve even put cameras on dogs which is a lot of fun. It has all been led by creatives suggesting new ways of doing things or through trying out new technology.”

“One of the big changes this year,” he continues, “is that we have persuaded the Kennel Club to change the order in which the winner and the reserves are announced during Best In Show. Now, the winner will be revealed at the end of the presentation ceremony, as you would with most other types of competition, rather than at the beginning. The more Crufts we do, the more we can gradually move things along and make it more of a [sporting] event.”

As with any televised sport, the on-screen talent is a crucial aspect of the production.

In addition to Rosenthal, C4 regular Clare Balding (who is also presenting the Winter Paralympics this weekend), will head up the daily live coverage. She will be joined by long-standing Crufts commentator Peter Purves, fellow commentators Jessica Holmes and Frank Kane, and Professor Noel Fitzpatrick, better known to C4 viewers as The Supervet. Various special guests will appear throughout the event too. Comedian Alan Carr will host the daily afternoon entertainment show.

The output will include not just the competition elements but also the emotional side of the dog-human relationship, says Foulser.

“All the guests have got a tale to tell, about dogs and owning dogs. We do lots of tear-jerking stories about how dogs play important roles in people’s lives. It’s very much focussed on the human-dog interaction throughout. The human element is really important.”

Much like Sunset+Vine, a company that is definitely not going to the dogs.

Coverage of Crufts airs from Wednesday 7 March 2018 to Sunday 11 March on Chanel 4, More4 and online.