Best in Show: Sunset+Vine on covering Crufts and getting social media integration right

From Bull Terriers to Mexican Hairless, Crufts 2019 was once again a British doggy sensation with tens of thousands of dogs competing for the world class title of Crufts Best in Show. This year marked 10 years at Birmingham’s NEC for Sunset+Vine, which has worked on Crufts with Channel 4 since 2009. 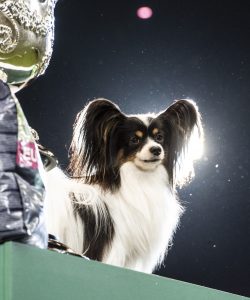 Dylan, a Papillon, won the coveted title of Best in Show at Crufts 2019 at the NEC, Birmingham [picture credit: Kennel Club]

This year Sunset+Vine delivered digital highlights for rights holder, the Kennel Club, and produced live coverage as well as fast turnaround highlights packages of action and judging for Channel 4 TV programming, using a crew in excess of 115 people to bring all manner of dogs and their antics to viewers across the country on TV and social media. Regarding the latter, this year Sunset+Vine also hit the sweet spot on its integration of social media and live coverage.

Sunset+Vine produced live coverage of the Crufts Arena for all four days of the show from 7-10 March, with 9.5 hours of footage going out in total on Channel 4’s programming including Crufts: The Daily Show, plus 2.5 hours of highlights on More4. Digital coverage included 40 hours on YouTube and over 30 hours on Facebook, plus social clipping and highlights posting on YouTube, Facebook, Twitter and Instagram.

David Stranks, executive producer at Sunset+Vine, commented on the challenges the production team faced at Crufts: “It’s the sheer size of the venue, and the event itself, which creates the biggest challenges for our roaming production team. Five huge halls, 160,000 visitors and around 30,000 dogs means there’s a lot to consider to ensure our ENG crews can operate quickly and safely. Our longest cable run is over 400 metres for our radio cameras; that’s significant.” 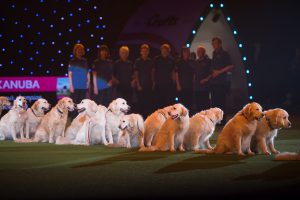 The event was a Sunset+Vine production with CTV Outside Broadcast, which won a competitive tender process three years ago, providing the outside broadcast facilities. To make this vast venue work, Sunset+Vine used two outside broadcast production trucks, a specialist edit truck housing six edit suites and all media management, a satellite uplink truck and two large support trucks.

Added Stranks: “The main innovation comes down to the way we approach our coverage. We treat Crufts as if it is a major sporting event, comparable to how we would cover equestrian competitions, as opposed to presenting it as a lifestyle event such as the Chelsea Flower Show.”
The Channel 4 programmes were transmitted via a dual dish NEP Connect uplink truck using diverse satellites and geographically separated downlinks.

Hyperactive provided the six edit suites and all media management facilities, while Storm Broadcast provided all the presentation graphics equipment. SES provided a specialist edit vehicle. The operation ran with two separate production galleries, one for the main arena and the other for presentation. 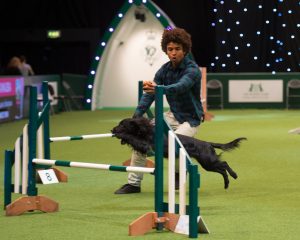 Channel 4 presenter, Radzi Chinyanganya, puts a spaniel through its paces in the ring at Crufts [picture credit: Kennel Club]

Struggles with social are over

On social media, this year Sunset+Vine was finally fully integrated with social media via never.no; never.no is Channel 4’s preferred partner and a leader in the field of aggregating social data, especially during live broadcast.

Strank noted that there were less innovations within the area of social media this year, and instead a focus on, “actually making it all work effectively after two previous years of trying to integrate never.no and provide a social dimension to the coverage less than successfully”. 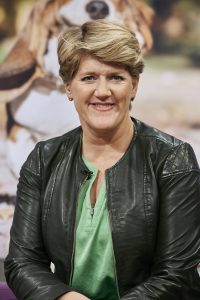 never.no’s social engagement platform, Story, with Brainstorm Engines graphics being supplied by Storm Broadcast, allowed Twitter, Facebook and Instagram posts to be fed into live programming, and read out by TV presenter Clare Baldwin. Viewers were able to feature on the screen with their pets and a message, creating a personal element to the show. On the Sunday evening prior to Best in Show, never.no engaged Channel 4 audiences by running a live social poll as to who their favourite dog was (Dave the Boxer won the vote, but not the show). Sunset+Vine’s online streaming was delivered via IP from the site.

Meanwhile, Dave Phelan, director at Mode Vision, created a range of new social and digital graphics for the 2019 Cruft’s coverage.

As for the studio set up, a relatively small studio was built onsite at the NEC for the main presenter, Balding, who also worked this year with Radzi Chinyanganya as a roving reporter and commentator Peter Purves, as well as regular guests such as Professor Noel Fitzpatrick, also known as Supervet.

Three cameras comprised of a Jib and roving live RF cameras were used to take talent into the arena and around the halls. The RF coverage allowed for live reporter pieces from the five primary halls, which covered the equivalent of almost 10 football pitches.

In total Sunset+Vine used 14 cameras made up of a mixture of standard broadcast cameras, mini-RF and broadcast RF ones.

Stranks concluded on Crufts 2019 and the vast distances the crew had to cover here that it was, “all good for the fitness and upping that step counter!”. Until next year!