Best of BVE 2015: New product launches around the camera

Broadcast Video Expo at London ExCeL has become so well established, not only as the main show in the UK but also as one of Europe’s main shows, that exhibitors are increasingly likely to launch new products there rather than wait for NAB. This year there were several new cameras, numerous lights and camera support products, and a variety of other equipment making their debuts, many of them suitable for use in sports production.

ClearView Imaging was showing a prototype of a new miniature Ultra HD camera from CIS, which should be available by June. Its existing VCC-HD1 HD camera is often used as a goal or stump cam, and the UHD camera will be aimed at the same market, although it will be about twice the size (the prototype was larger again), making it about the same size as the VCC-HD10/30ZM (the model with built in 10x or 30x zoom lens).

The UHD model uses a 4/3-inch custom sensor with a global shutter and CIS’ own Clairvu image processing engine (FPGA) “that ensures image quality that matches traditional three-chip broadcast cameras,” claimed Sean Ward, OEM sales manager, ClearView Imaging, European distributor for CIS. It will shoot 3840×2160 UHD at up to 60 frames per second (standard), but CIS has plans for 120 and even 240fps versions. It is planned to come with an interchangeable lens mount and quad 3G-SDI outputs. Ward believes it should cost less than £2,000.

Arri’s new Alexa Mini isn’t quite as compact as the name implies, but for anyone wanting the shallow-depth of field cinematic look in confined spaces, it offers a proven workflow. It has lightweight carbon fibre housing with a titanium PL mount, which connects directly with a new internal sensor mount to ensure a stable flange focal distance, even when using large lenses. Its interchangeable lens mount can be replaced with any of those designed for the Arri Amira, allowing the use of B4 video and EF mount stills lenses. Like the Amira, the Mini can record 4K UHD ProRes images, for realtime 4K UHD output and simple pipelines for high-resolution deliverables.

It can be operated as a normal camera with Arri’s MVF-1 multi viewfinder, or with an on-board monitor and controlled via the user button interface on the camera body, or via wireless remote control (iOS or Android devices can also remotely control camera functions such as the motorized internal ND filters via WiFi).

“It can record internally at up to ProRes 4444 XQ, but Codex will provide a multi camera recorder (which will probably be available in September) that will record up to four Minis at a total of 280 frames per second using 2.8K Arriraw,” explained Michael Jonas, Arri’s product manager for camera systems. The maximum frame rate per Mini is 120fps (2.8K Arriraw). The Codex recorder will offer eight channels of HD-SDI input plus metadata and embedded audio. Mini deliveries start in May, from about £25,000.

A Flare for 4K

IO Industries was showing its new Flare 4KSDI compact 4K camera head, which has a Super 35 global shutter sensor and quad-link 3G/HD-SDI outputs. It is due to ship this week for $8,000, including a choice of lens mounts (PL, Nikon F or passive EF mount – active EF mount an optional extra), plus power supplies. All settings can be adjusted remotely with the same hand-held remote control as IO’s existing 2KSDI camera or it can be used with third-party control panels. Multiple cameras can be synchronised together with a tri-level-sync reference, for live events or multi-camera systems.

There are four SDI outputs and it can deliver up to 60fps in 4K (10-bit 4:2:2 or Raw – there is currently no HD mode). It has no internal recording. This requires a separate 4K field recorder such an AJA Ki Pro Quad or Convergent Design’s Odyssey7Q, but that means it is smaller (only 92x92x75mm) and weighs 600g without a lens, so that it can be used for tight PoV angles in race cars, inside small gimbals for helicopters (or drones) or in underwater housings. It also simplifies jib work, as it can be used with much lighter units, such as the Polecam. 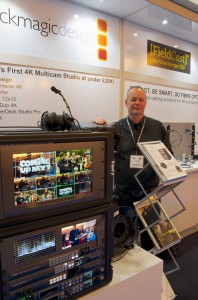 A complete three-camera Ultra HD studio costing less than £20,000 with everything needed to go on air was shown by Holdan. It was based around Blackmagic Design’s 4K Studio Camera and ATEM 1ME Production Studio 4K, which can output simultaneously in 4K and down-converted HD. It also used 4K SmartView and SmartScope Duo displays for full resolution monitoring and signal analysis, plus FieldCast’s new optical fibre technology, Panasonic Lumix zoom lenses, and an integrated UHD portable production unit for camera control, signal switching and routing, monitoring, recording and crew communications.

It is designed to make it easy to move to 4K, while still being suitable for HD production. “It is all configured and ready to go. We’ve even thought of the headsets, cooling fans and all the interconnectivity,” said Holdan MD, Chris Daniels. “It is all fibre based, which is amazing for £20K.” Anyone needing to rig a presentation studio quickly at a live event might be interested, as it can be set up in a matter of minutes. 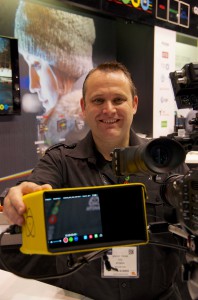 Jeromy Young (with updated Shogun on a Sony FS7): “4K is really taking off”

Atomos has become the first to support Avid’s new DNxHR 4K and UHD recording format, which is part of the new AtomOS 6.2 firmware for the 4K £1,299 Shogun recorder. The Shogun has been extremely successful, with more than 10,000 sold in just two months. “That was my 6-month forecast. 4K is really taking off,” said CEO, Jeromy Young. It is mainly selling to users of Sony’s new FS7 (who can record 10-bit over both HDMI and SDI), the low-light Sony A7s DSLR, and Panasonic’s GH4. “They are the main three cameras really driving 4K at the moment,” he said.

Some Shogun users had wondered why Atomos was being so slow to add DNxHD recording to the Shogun, but the delay was due to working on the 4K version, which he believes will have a big impact as so many 4K and UHD cameras are coming out. AtomOS 6.2 also includes 3D look-up tables and down conversion to high-quality HD on output (both for playback and loop out during recording).

Teradek’s new Live:Air iPad Production Suite can cope with up to four live streams at once, as well as playing in recorded video, adding graphics, transitions and effects. It is designed to work with Teradek’s various WiFi-enabled streaming devices, such as the tiny new VidiU Mini. “We wanted to take the idea of being mobile and portable and apply the whole live switching interface to it,” said Teradek software engineer, Richard Billett. Every source is automatically discovered and configured, and more feeds can be added during a live broadcast. 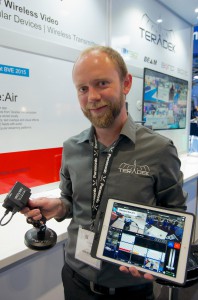 Billett with the VidiU Mini-equipped GoPro and Live:Air iPad Production

The app can also just be used to overlay titling and sports scores for a single camera production, even if the only video source is the iPad’s built-in camera. The VidiU Mini is a miniature HDMI H.264 HD encoder with an internal li-ion battery for up to three hours runtime, Bluetooth for quick device configuration, dual band WiFi, and integration with the most popular Web streaming services, including Livestream, Ustream, and YouTube Live. It is available this week, while Live:Air is downloadable from the Apple App Store for $99. Teradek also showed its recently introduced Beam, a camera-back H.264 broadcast contribution encoder capable of up to 50Mbps that can cover distances up to 750m with two frames of latency, making it useful as a wireless link back to an OB van. It operates over the unlicensed 5GHz band and features: HD-SDI input; talkback; RTSP and MPEG-TS protocol support; and multicasting, allowing four receivers to be used simultaneously with a single transmitter.

Lemo showed how users of Red cameras could get UHD signals from the 6K Epic Dragon using its new 3G Serbal interface. “Red has used Lemo connectors from the start, because it wanted reliability,” said Lemo MD, Richard Thomas. The Serbal takes the four 3G-SDI outputs and outputs them on a single SMPTE Hybrid fibre cable. “It is auto-configurable, so it is literally plug and play,” he added.

In the broadcast workflow demonstration at BVE, Lemo showed the system linked by Furukawa cable, which was knotted to show its resilience, while the Lemo connectors were subjected to a 50kg load test, to show their strength, with the result streamed to a UHD screen. Lemo also has a new range of T-series connectors that are waterproof to IP68 and can easily be retrofitted into any existing, widely used B-series connector kit.

It used to be that if you dropped a light, you expected it to break. Now you can throw some lights onto concrete and expect them to continue working – at least you can with the new Alphatron TriStar 4 on-camera LED light. According to Richard Payne, technical pre-sales manager with its distributor, Holdan, it is “virtually unbreakable” and offers “fantastic build quality and resilience to kit bag life.” The demonstration model at BVE had been thrown to the floor numerous times (including by us), and worked perfectly — one corner of its metal barn doors had been bent a little, but there was no other damage. 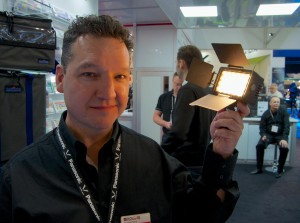 It uses a re-designed mount, with a metal ball joint — unusual in this price bracket (expected to be less than £200 when it ships next month). The bi-colour light, tuneable between 3200K and 5600K, doesn’t change intensity as you change colour, and uses 96 long-life, high-brightness three-chip surface mount diodes (which effectively have three times the output of something using the same number of LEDs), and promises 100-10% dimming without noticeable colour shift. It is powered by Mini 4-Pin XLR or Sony NP-F Battery, and draws 12W.

Glensound launched its 28th commentary box at BVE: The Inferno, for Dante audio networks. It is a single-user box that can be used on its own, or networked in a multi-user system. It has seven inputs for headphone monitoring and eight audio outputs – a programme out of the main microphone plus seven talkback outputs. Routing is controlled by the free Dante Controller software, for seamless point-to-point and point-to-multipoint routing within a Dante network. All routes are stored locally on the Inferno whenever a change is made, so Dante Controller is only needed for making changes. Audio is uncompressed and at very low latency levels.

The Inferno (£1,750) is highly resilient offering network connections on CAT5 and fibre (both main and redundant), and powering via mains AC, external DC, or via CAT5 using PoE. For a self-contained Glensound network audio system, there is also the Dark 88 (£1,450) 8×8 Dante audio breakout box, which can act as the network audio interface for the Inferno.

Giving audio a leg up 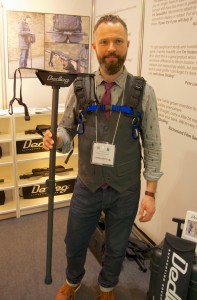 The Best New Product at the show, as chosen by BVE, was the Dedleg, a monopod designed to support an audio bag, which was designed by sound recordist Paul Zanders for his own use, and sells for £225. It can support up to 30kg, and Zanders sold more than 25 at the show. When you add the weight of the mixer/recorder to all the wireless receivers and other kit, “some recordists kits weigh over 12kg, which is not good for your back,” he said. Dedleg collapses and folds up to stow under the bag when not needed.