NBC Sports Group’s annual pilgrimage to the Stadium Course at TPC Sawgrass arrived early this year, with The Players Championship shifting from May to March as part of the revamped 2019 PGA Tour golf calendar. The Peacock also had a new partner in covering golf’s unofficial ‘fifth major’ last week, collaborating with new Comcast-owned sibling Sky Sports to offer the most coverage ever from Ponte Vedra Beach, FL.

As is par for the course for NBC, the network once again deployed a cavalcade of high-tech production tools to cover the par-3 17th hole’s island green, providing fans with unique perspectives on one of the game’s most iconic holes.

“The Stadium Course at TPC Sawgrass is one of golf’s most iconic and familiar venues for viewers, in particular the par-3 17th hole,” said Ryan Soucy, VP, golf operations, NBC Sports Group. “As a result, NBC Sports for years has employed a technologically advanced production at The Players in an effort to bring viewers as close to the action and excitement as possible. It has also become a great opportunity for us to introduce new technology elements that further enhance the overall viewing experience.”

The Players’ move to March proved a positive one for NBC Sports’ operations team, slotting The Players right in the middle of its seven-week run of PGA Tour coverage.

“It has been a wonderful transition back to March, when the event was originally staged until moving to May in 2007,” said Soucy. “We’re in the midst of our exciting stretch of seven consecutive weeks of live PGA Tour coverage on Golf Channel/NBC, with The Players in the middle. Our team enjoys the challenge that this stretch presents, and The Players in particular works well in March instead of as a standalone production for our NBC Sports team in May.” 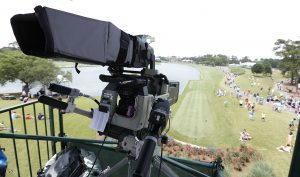 With Comcast having acquired Sky last year, The Players marked the most extensive production collaboration to date between NBC Sports and Sky Sports. NBC Sports’ week-long coverage includes several collaborations with Sky Sports Golf, which rebranded itself as ‘Sky Sports: The Players’ for the duration of the Championship. Sky Sports Golf aired nearly 25 hours of live simulcast coverage of Golf Central Live From The Players, and the two organisations shared content across their respective digital platforms and social-media handles.

“Our operational workflow remains the same,” said Soucy. “We are collaborating across our Golf Central Live From The Players news coverage, with coverage windows being simulcast on Sky Sports Golf, and vice versa. We’re also utilising ‘analyst’ swaps, with Golf Channel and Sky analysts appearing on the other’s respective news coverage.” 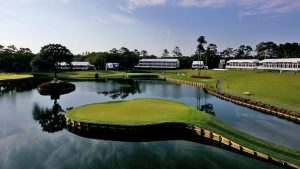 NBC deployed eight cameras to cover the par-3 17th, including a microscopic lens embedded in the lip of the tiny bunker fronting the green. A cable-suspended FlyCam system provides unique vantage points by flying over the body of water between the par-5 16th- and 17th-hole greens. A camera crane positioned 150 ft. in the air offered aerial views of Holes 16-18, and another on the island adjacent to the 17th green captures reactions of those playing No. 17.

“Our use of FlyCam this year gives us greater flexibility to cover the entirety of the hole,” said Soucy. “We’ve added a dedicated Toptracer tee system on No. 17 as well and have the incoming reverse-Toptracer on the green.”

Beyond 17: 60+ cameras, Toptracer across the board

In addition, NBC had Toptracer technology capability on all 18 holes, including two RF Toptracer systems that could be used for fairway and second shots as well as on the driving range. Virtual Eye technology, provided by ARL Sports Graphics, also continued to play a big role in the coverage.

“We have great partnerships with both Toptracer and ARL,” noted Soucy. “We’re employing a lot more tracing equipment this week as compared to last year.NBC and Golf Channel live tournament coverage is complemented by more than 60 hours of live news, analysis, and features within Golf Central Live From The Players and Morning Drive; nearly 45 hours of PGA Tour Live coverage on NBC Sports Gold; and more than 20 live hours of The Players ‘Launch Pad’ coverage on DirecTV.

In the compound and fully connected with Orlando and Stamford

Inside the compound, NBC deployed its standard golf configuration with NEP’s ND4 (A, B, and C units), and Golf Central Live From The Players sharing ND7 (A, ,B and D units) with DirecTV Launch Pad coverage featuring the 14th hole (airing Thursday-Sunday). BSI served as the network’s RF vendor for the first time at The Players.

NBC Sports also utiliised its NEWBERT remote flypack to connect the onsite production at TPC Sawgrass with Golf Channel’s home facility in Orlando. The flypack featured an Evertz SMPTE ST 2110–based IP transmission system, which was first used by NBC at the 2018 Open Championship at Carnoustie.

FileCatalyst was used for bidirectional file transfer of graphics elements and video clips between Golf Channel in Orlando; the NBC Sports broadcast centre in Stamford, CT; and the NBC Sports TV compound at TPC Sawgrass.

“We started using the file catalyst in 2017,” said Caputo. “Since then, we have doubled the size of the pipe, and file-transfer workflow continues to grow. FileCatalyst is allowing remote edit to get clips from Golf Channel’s archive and allows tournament EVS clips to be transferred to Golf Channel for use during Golf Central Live From The Players pre- and post-game shows, along with Morning Drive and edit.”