2019 has been (and will continue to be) a busy year for AE Graphics (AEG). It has major events throughout the year, with the ICC Cricket World Cup in England and Wales commencing on 30 May, the Rugby World Cup starting in Japan on 20 September, and a lot more in between. 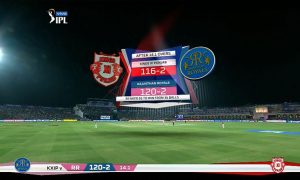 AEG has a long relationship with IPL

Speaking to SVG Europe, Stuart Coles, CCO at AEG, said: “This is our biggest year so far, primarily because of the two World Cups, and also our regular contracted work is also increasing.”

He added that the company has regular experience of working on major events, even if those events are not the massive global sensations like the rugby and cricket World Cups. He noted: “We do IPL cricket in India every year as well as other large events, so it’s not like we go long without a major event being delivered.”

Bigger contracts for a broader strategy

As to why AEG is now scoring such weighty contracts, Coles states: “We’ve been under new ownership since December 2017 – we were privately owned up to that point, and now we’re under a private investment company – and we’ve done a lot of work over the last five years to enable ourselves to pitch for these bigger contracts [that we’re now getting]. We have expanded the range of services we deliver, and have the resources and infrastructure in place to be able to deliver these major event contracts. If you can deliver these [kind of events] you can deliver anything,” he enthused.

On the Cricket World Cup, AEG is on the last cycle of its four year tender, when it will apply again, but the company has provided its graphics skills to the International Cricket Council (ICC) for many years; since 1996 AEG has worked on all men’s Cricket World Cups with the ICC, bar the 2007 event hosted in the West Indies. This year AEG is tasked with providing core world feed graphics, involving three graphics engines, for the ICC. [See here for more on what AEG is providing at this year’s Cricket World Cup] 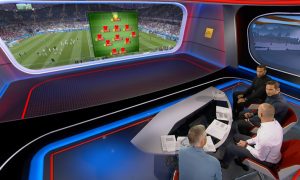 Comments Coles: “The ICC and others tend to look at us as a technology partner, able to make X work in a practical environment, not just a graphics partner.”

For the 2019 Rugby World Cup among many other deliverables, AEG is providing augmented reality (AR) graphics for live matches. Coles explains: “World Rugby is very keen to deliver AR graphics in that event, so we’re presenting live match data with AR for the live world feed coverage.”

Data from Spidercams placed around each venue will be rendered using Vizrt, with AEG’s solution allowing the company to quickly calibrate systems and present graphics live in virtual space. Adds Coles: “While that concept isn’t particularly new, the plan is to get it into live match coverage. Before it was used before the game and that sort of thing. Now, you can use AR to help your production teams to tell the story of the match.”

Coles states: “We are trying to get more of our own technology into what we do, but we do work with [best in class] partners, such as the likes of Vizrt. We go to all these [trade] shows and see these amazing technologies being demonstrated, but it’s always a far cry to see any of it actually work across the world [in real life conditions]. We are able to take the best technology [from partners] and [integrate it into our own technology to] make it work.”
Going forward, Coles states that, “mergers and acquisitions are very much on the table”. He says: “It’s about bringing new technology into the business.”

One area the company is particularly interested in is virtual studio solutions. AEG did the graphics for the BBC’s virtual studio at the World Cup, and it is working on a couple more virtual studio projects for other clients right now, Coles says. “We’re working with providers like Zero Density and we’re developing on the Unreal Engine as well, and talking to Ncam. There are a lot of potential [technology] partnerships there to add to our front line delivery skills.”

For some events AEG partners with the likes of Sunset+Vine or IMG, but for major events in particular, it has to win tenders. However, due to the nature of what AEG delivers and how it delivers it, sometimes the data part of the tender done in partnership. An example of this is the Rugby World Cup this year, where AEG is working with Opta which will deliver deep level data remotely, while AEG will do, as Coles says, “first level data and graphics”. He adds: “Because of the latency and reliability issues that come with off-site data capture you need someone on site.”

On that note, Coles points to the Rugby World Cup as a prime example of challenges the company faces. He explains: “The scale of these major events always presents challenges, but we’re comfortable with that. The Rugby World Cup is more challenging geographically however, and the disaster recovery factor that we have to consider in Japan is important as storms are likely to hit during the months of the event. There are disaster recovery venues and plans around that.”

He concludes: “It will be good to be part of this big event in Japan, as with the coming Olympics in 2020, we hope the Rugby World Cup will provide us with the experience and possible opportunities for Tokyo.”