Blackmagic Design and a very memorable day trip to Ghana 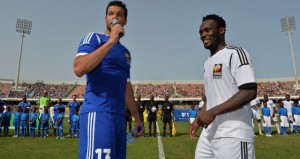 When Michael Essien wanted to broadcast his charity football match from Ghana, the natural choice was In-5 Broadcast, who over recent years have become well- known for cost-effective outside broadcasts, writes Barrie Williams.

However, with no HD broadcast equipment hire in Accra, it was necessary to take a complete fly-away studio on the plane. It made an interesting sight at Gatwick Airport seeing the six-man crew arrive with 17 flight cases which included a particularly heavy EVS.

The original plan was a day trip to Ghana, but fortunately the crew were permitted to fly with the footballers one day early, giving them an evening to pre-rig the studio before the game. The stadium was very large so using fibre to the cameras was the only option, not just for the cable lengths, but also to keep the shipping weight down.

In-5 Broadcast owner Carl Owen remarks: “The Blackmagic ATEM Camera Converter was the obvious choice due to its size, weight, and having tally and intercom built in. And for realtime scores, leader boards and on-screen graphics, I was very pleased with the ATEM 1/ME Production Switcher as a compact and lightweight character generator.

“Not everything goes well on live broadcasts, and one locally sourced camera needed urgent attention just five minutes before kick-off so we dispatched someone to run around the pitch perimeter to adjust the camera. That seemed to amuse the locals who cheered his valiant effort and giggled rather a lot.

“Then just 90 seconds before we went live on the satellite feed to London, a shy lad from the satellite truck entered the control room and said ‘everybody looks very tall, and very thin’.” He was describing anamorphic 16:9 stretch. “It was clear we needed to send 4:3, not 16:9 widescreen. The standard conversion from HD to SD was being done with the Teranex 2D, so with literally just seconds to go, we pressed the aspect ratio button and the picture was re-scaled. The local lad had clearly never seen a Teranex, and could not believe that one touch of the button could instantly fix what he imagined was an insurmountable problem.

“For the next 75 minutes all went as planned, until suddenly one camera went to black without warning. We despatched one of team to investigate. A few minutes later the camera came back on line. The problem? Unbelievably, a security guard saw a mains socket under the camera, and realising his mobile phone battery was flat, unplugged the camera, and plugged in his phone charger. The joys of the outside broadcast!”