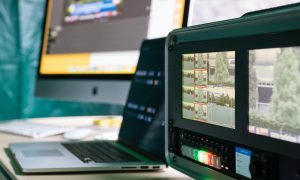 Live streaming is becoming more and more accessible for sports that typically take up just a small corner in the overall world of sports broadcasting. With services and platforms for streaming growing rapidly, more and more associations and clubs are exploring the new and wider audiences this medium unlocks in order to better promote their sport.

As the company’s first foray into the world of field hockey, they had to adapt their style to match the sport’s high speed nature. “It’s a fast-paced game, with lots of quick passing,” begins AOTV director Daniel Harris. “We had two camera operators and a vision mixer working alongside a director while the BBC had its own producer, and someone to mix the graphics.”

“Filming was done from a gantry position on a pair of [Canon] C100s. We supplied the 1080i60 feeds directly to an ATEM Television Studio HD for vision mixing, where we were also used a SmartView [Duo] to preview the action. This would be programmed out to a HyperDeck Studio Mini, and into an iMac running WireCast. We even supplied the BBC with a clean feed using an AUX out on the switcher.

“For audio we had two commentator microphones for the BBC and an FX mic all running over SDI in to the switcher. We also ran another [HyperDeck Studio] Mini recorder separately to the ATEM with our own FX mic, so that we had access to our own audio separate from the BBC’s copyrighted commentary.

“And because we were recording to the HyperDeck [Studio Mini] throughout the live production, it meant that we could produce a highlights package for the client as well.

“While the BBC streamed live to the red button and the BBC Sport website, we were going live to YouTube simultaneously. Similarly, the BBC had a team producing broadcast graphics in the gazebo next to us and then sending them back to Media City for transmission (TX). The AUX out on the ATEM was invaluable, allowing us to provide a clean feed so both our team and the BBC could add its own graphics as required.

“The ATEM [Television Studio] HD was a new addition to our workflow. What I love is just how easy and straightforward it is to operate using the new control panel. For instance, the ethernet port on my MacBook failed, but thankfully the new front panel meant we could run the switcher without a laptop. Even when you’re just setting up, and you need to check your signals, you can quickly send out colour bars and know that everything is running.”