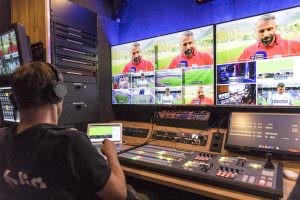 FC Red Bull Salzburg’s club channel produces content including replays and pre-match content as well as press conferences, interviews and fan reports, all of which are shown in stadiums and streamed live. Mediahaus GmbH has played a major role in expanding the club’s production infrastructure, as CEO Wolfgang Angermüller relates.

“What we’ve created is a system where all of the components can talk with one another, eliminating the need for complicated setups,” he says. “The heart of our OB workflow is an ATEM 2 M/E Production Studio 4K switcher and broadcast panel, where we vision mix two feeds; one for the giant screens in stadium and one for the clubs in-house channel shown in the corporate boxes.

“We receive two feeds from the host broadcaster (clean PGM and main camera) which forms the base of our programme. In addition to that we operate five camera positions around the stadium including one on the main gantry, a locked of beauty shot from the stadium roof and players tunnel, as well as a roving pitch side camera. For slow motion and clip playback we use a NewTek 3Play 425.

“For acquisition we currently use rely on.a mix of older Sony PDW700 cameras alongside the URSA Mini 4K and URSA Mini Pro.“With the addition of external controls on the URSA Mini Pro, we now have a broadcast ready solution that is considerably lighter and features built-in ProRes support which fits perfectly with our existing FCPX post workflow.

“In deploying the URSA Mini range we have done away with any need for expensive RCPs and camera control units (CCU) while still being able to use our existing B4 Fujinon lenses. Furthermore we have brought down the cost of camera channels significantly without compromising on quality or performance.

“Each camera channel outputs a 1080i50 signal back to the OB truck. We have a separate bay onboard where an engineer color manages each camera channel. The position features two monitors. One runs the ATEM Camera Control software while the second displays an output from a Blackmagic MultiView 16. This allows us to control color temperature and iris remotely on the URSA Mini.

“And with the stadium not yet running an optical fiber network we installed a Smart Videohub 16×16 SDI matrix in the central technical room allowing us to reclock each camera signal at the halfway point. Signal management onboard the OB truck also relies on a 40×40 matrix from Blackmagic.”