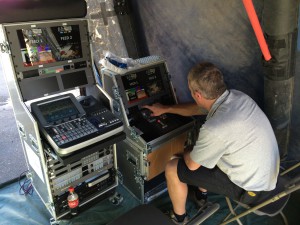 Patrick Hendriks of Dutch-based BP Satellite Solutions again deployed a variety of Blackmagic Design products – including SmartScope Duo dual-rack monitors and HyperDeck Studio disk recorders – during his work on this year’s Dakar Rally, which took place between 5 and 18 January in South America.

Hendriks and BP Satellite Solutions’ role in the production is to take four principle feeds and compile highlights programmes from each day’s proceedings.

Six HyperDeck Studio disk recorders feed back into the EVS servers, whilst a HyperDeck Shuttle provides a compact solution if he needs to move away from the production hub and record material quickly and easily elsewhere.

Blackmagic Design ATEM Camera and Studio converters have been selected for the fibre connection between Hendriks’ editing and production set-up and the transmitter. Meanwhile, the SmartScope Duo dual-rack monitor allows the team to take a flexible approach to video and waveform monitoring.

The combination of the MultiDock super-fast Thunderbolt disk dock and an Apple MiniServer allows Hendriks to edit with Final Cut Pro “if we need to add something that we cannot do on the EVS, which is what we normally use for editing.”

A committed user of Blackmagic Design products for the last three-years-plus, Hendriks has found them powerful and, in particular, reliable where some other well-known brand systems have failed. “There was one year where pretty much everything broke down apart from the pieces of Blackmagic Design equipment,” he says. “Over time, I have started to use Blackmagic Design not only at Dakar, but also for my Formula 1 work, and it has proven to be outstanding. It does not break down due to temperature, dust or rough handling. It just keeps on working…”

Looking ahead to an imminent F1 season that will again find Blackmagic Design technology at the heart of his workflow, Hendriks also plays tribute to the company’s back-up and support capabilities. “I remember a time on the F1 when a router panel broke in Australia,” he says. “We had to be back up and running in Malaysia between the one race ending on Sunday, and the set-up needing to be in place in the next location on Wednesday, and Blackmagic Design ensured the panel got there in just two days thanks to its support facilities in Singapore. Everyone was amazed by the speed of service.”