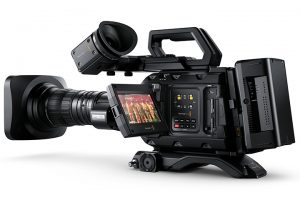 Among a raft of new product announcements, Blackmagic Design has unveiled a sub-£2500 UHD broadcast camera that can be used for both studio and live production work.

The URSA Broadcast has a B4 lens mount, operates in both HD and Ultra HD mode and features a 4K sensor.

Grant Petty, chief executive of Blackmagic Design, said: “URSA Broadcast is exciting because it makes high end broadcast camera technology available to everyone from AV and web producers all the way up to professional broadcasters, for the same price as a common DSLR.”

The camera features what the company refers to as “traditional broadcast controls” along with an extended video mode which is said to “capture incredible looking video with accurate skin tones and vibrant colours.”