Blurred lines: The convergence of broadcast and digital inside the NFL 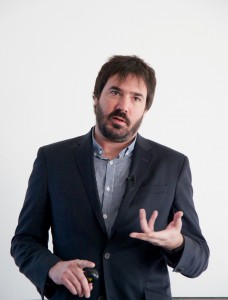 NFL’s Shannon Rutherford: “Digital rights will be crucial to our long-term success”

Changes in the way viewers are consuming sports will have a profound affect on how sports bodies deliver their matches, potentially bypassing broadcasters, according to Shannon Rutherford, the NFL’s Director of Digital Media Video Operations. “The market is changing, not only from a technology perspective, but also from an audience perspective,” he told the recent Streaming Forum in London. Today, viewers “are all using their own devices and are likely all watching different videos.”

The NFL has been reaching out to international markets, and played three games in London in 2015, one of which was only available over the top (via Yahoo! — in a deal reported to have been worth $20 million). It hopes to repeat that this year, and add a further game in Mexico.

Although the NFL’s broadcast rights (with Fox, CBS and NBC, said to be worth more than $3 billion per year) continue until 2021/2022, he believes that “digital rights will be crucial to our long-term success.”

In the US, the number of hours spent watching TV each day is gradually declining, as time spent viewing digital (mobile/online) video is increasing. Although digital video hours are still about a quarter of TV’s share, it is a noticeable trend. People are also now consuming almost half their media on some sort of mobile device or PC.

The US pay TV market has remained at about 119m households since 2010, while the number of online video viewers has grown by 30%, and is now more than 190m per month. Younger audiences, in particular, have gone digital. “That is going to have a lot of pressure, and effect, on the opportunity for ad revenue, making digital more and more attractive to reach key demographics,” said Rutherford.

To make the most of this opportunity, the NFL is already building a range of online programming, where rights allow it. These include: NFL Game Pass, NFL Mobile, NFL Now, original programming, and social media.

The NFL Game Pass app allows anyone to watch any game live, in the game window, internationally. It has a simple user interface, with all the plays and data. NFL Mobile is a similar app for the US domestic market.

To deliver these services, at scale, the NFL’s feed acquisition uses three encoding facilities across the US, giving it full redundancy, for almost 100% uptime. It uses Elemental encoders to push the feeds directly to the content delivery network, and uses token authentication to ensure that only its authorised apps can talk to the service, so if the link gets put on Reddit it will just appear as if it’s broken.

Although for online, it uses a lot of broadcast-style equipment and workflows, such as highlights editors cutting clips from the live stream. “The NFL is very similar to a news organisation, in that our highlights are perishable,” he explained. “People want to see what happened that day, so the faster we can get out those highlights, we maximise the opportunity for revenue” — which means dynamic ad insertion.

All the ads are mid-roll for its live video, “for fear that if you get a pre-roll, that a viewer lands in to part of a commercial break, instead of a live game,” which would be a poor user experience. The operators take their cue from the broadcast game director, and then take the ads from whichever broadcaster has the rights.

It uses Adobe’s Primetime player, “because when we looked at how to deliver ad insertion for mid rolls at scale, there’s really two ways. You can do it server side or client side,” and Primetime allows client side, which is important because the server side, middleware-based systems might not cope with the scale needed. “And we can never have the monetisation opportunity bringing down the fan experience.” This way, “there is no fear that if that middleware stack goes down, it’s going to bring the stream down with it. The player handles all of the stitching,” which has been very successful and simple for the operators to use.

He sees NFL Now as a first response to the question: “How do we deliver compelling content to a new audience, and where do those lines between broadcast and digital blur?” From a production perspective, it uses broadcast infrastructure, “but we’re producing an entirely different product. It is a lean-back television experience that you can also lean in to.” Delivering the content and making it more interactive is the challenge, requiring editors to rank content, to create playlists that the viewer chooses from, mixing live programming, advertising, and features.

The NFL digital offering is becoming a success, certainly by the measurements that Rutherford outlined it had to meet. Its first priority is 100% uptime during game windows, to meet its service level agreements and to ensure it doesn’t affect its brand reputation by delivering blank screens.

It also needs smooth delivery — under 1% buffering — and it needs to be fast. “Your users need to get your content quickly. They don’t want to wait. So, time to first byte should be less than one second,” he said.

“Success means money,” and if the NFL is to become a player in the digital space, “revenue has to start with a B [$1billion plus],” and all of its ad breaks need to be filled.

Rutherford also wants it to offer “a superior product to TV, offering 360º video, virtual reality, personalisation, original content, and integration with social media. This is an interactive medium, and as this technology advances I think there is going to be a wealth of opportunity” to create this superior product. Ultimately, “success is that our product will become a daily habit for our fans,” he added.

The services are available on a wide range of platforms, from iOS, Android and Xbox to PlayStation, Roku and Windows — “I think it’s on pretty much everything.” It is also doing an increasing amount of original programming, having doubled the number of regular shows it offers (from four to eight) between 2014 and 2015.