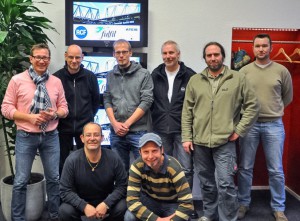 With a capacity of more than 80,000 spectators, the Signal-Iduna-Park in Dortmund – the home base of the German Bundesliga club and eight-times German champion Borussia Dortmund – is the biggest soccer stadium in Germany, writes Birgit Heidsiek. Therefore the technical concept and implementation of a new sound system represents quite a challenge – not least in terms of serving the needs of the largest standing place platform in a European soccer stadium.

A special feature of this project is the implementation of active loudspeakers that make it one of the first active installations of this scale to fulfil the EN 60849 standard for electroacoustic emergency alarm systems as well as the requirements of EN54 for voice alarm systems that will are set to become important in the near-future.

The acoustic, mechanical, and electronic planning and simulation were carried out by RCF and dBTechnologies Germany. The acoustic concept was developed by an Engineering Support Group (ESG) involving more than 20 engineers, led by Antonio Farrari and supporting worldwide RCF partners in the planning and project phase. In addition, Norbert Wessel and Georg Hofmann from dBTechnologies Germany shared their expertise with regard to the acoustic concept.

In total, 196 active Line Array modules of the RCF TT+Serie, TTL33-A, are being deployed in special ‘weatherproofed’ versions. The three-way system accommodates two 8” woofers for the low section, a horn-loaded 8” woofer for the middle tone and three 1” drivers for the high tone area. Every single module is driven by the integrated and DSP-steered output stage module equipped with 500+500+250 W / RMS.

The remote network RDNet, which is provided by RCF, is connected here in a specially programmed version to an Ateis evac system. It is therefore guaranteed that the signal path is supervised by the Ateis systems up to every swinging reel of the TTL33-A modules, with the status announcements transferred to the Ateis IDA modules. These modules generate a pilot’s tone which is supervised by the input modules of the TTL33-As. The function of the loudspeakers is checked by means of impedance supervision of the single components. Control protocol and signal distribution are fully redundant. In addition, the RDNet allows the venue to supervise the output stage status as well as all local settings, for example gain structure, signal entrance, temperature, delay etc.

Divided into 14 clusters of 14 TTL-33s, each array is complemented by a TTS26-A subwoofer. In addition to the extension of the transmission area, the TTS26-A Subwoofer also functions as an end-fired cardioid and controls the irradiation in the low frequency field down to 60 Hz, therefore contributing to a reduction of annoying reflections.

Due to an unusual array design that sports a vertical radiation angle of approx. 140-degrees, the system is not mounted with the standard-flight hardware but in an especially developed cluster frame. The mechanical planning and conversion process involved Expo Engineering from Oelde.

The overall plan and implementation (which commenced in the middle of May)  were achieved by fulfil engineering GmbH under the direction of Norbert Labudda.

fulfil engineering has also confirmed its further cooperation with Borussia Dortmund. “We are going to continue to maintain the whole technical equipment in the stadium,” says Labudda, adding with a flourish: “We fulfilled!”