Bring on the future: Lawo on the trends and drivers behind the direction of IP and the cloud for audio and video in 2022 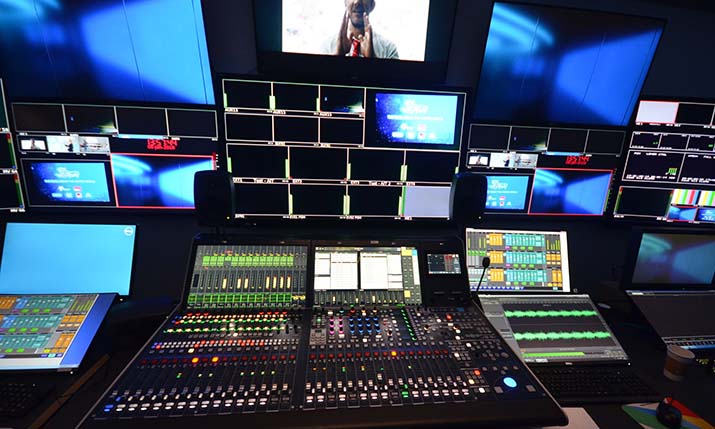 One of the Lawo mc2 56 consoles, fully assimilated into the all-IP facilities at TV 2, Bergen

It never ceases to amaze me how quickly humans are able to adapt to new paradigms when positive action is the only alternative to falling by the wayside. In 2020, many broadcasters and service providers had to come up with – as far as they were concerned – new ways of producing sports coverage while there still was something to cover, but most were a lot better organised when subsequent lockdown waves hit in 2021.

IP adoption advanced in leaps and bounds where it wasn’t already in place, and the fear of putting at least some of one’s eggs in the cloud basket quickly waned. And, yes, there were a surprising number of top-tier events to cover in 2021, like the Americas Cup, the European soccer championship, Grand Slam tennis, the Olympics, and so on. Regular events, too, of course.

IP allowed some to produce live multilingual commentary from 20 European cities using two hubs – mainly for redundancy reasons – in an off-tube scenario. In certain instances, video feeds and audio signals travel several thousand miles in as little as 150 milliseconds, just in time to be aired and streamed as multilingual sports productions. Some commentators even worked from their homes, over a public internet line, which admittedly took a bit longer (around 300ms), but never became an issue.

Other broadcasters welcomed the nudge to get around to using an IP network as a backbone for their coverage of the European soccer fest last June and July, even though the mothership was still a far cry from being thoroughly IP savvy. It was, though, an excellent opportunity for the team and its management to verify the added value of an open-standards-based broadcast IP network: 4K UHD signals no longer needed to be converted back to SDI, audio mixing consoles were moved around the premises – and beyond – in response to ever-changing physical distancing regulations, and processing power was leveraged where it was most readily available, more often than not hundreds of miles away from where the operators sat.

And although some operators with first-hand experience argue that the cloud is unlikely to be more affordable than owning hardware, while it also requires extra staff, it today takes some courage to admit that the cloud has not made it to the top of your agenda just yet, if only because open standards like the ones that now dominate the IP domain are deemed a prerequisite even for the cloud.

What will the future bring?

So what will the future bring? It might very well just be a little more of everything. Remote and centralised production are certainly here to stay and will, for the best part, be IP-based, almost certainly between the field of play and the hybrid cloud or the production centre. Gateways will continue to play a big part in set ups as long as only a few devices required for audio and video acquisition are IP natives, especially when existing baseband devices are not slated for replacement anytime soon.

Not owning the tools you need to get the job done is considered by some to be the new sexy, because CAPEX becomes easier-to-justify OPEX. This would plead in the cloud’s favor. But maybe – just maybe – only until the first invoice arrives, and the bed of roses turns into a mild nightmare.

A project completed only a few days ago even suggests that SDI and MADI are still very much alive and kicking. Mixing those with IP islands and gateways, the customer says, makes financial sense even in late 2021 and beyond. It would therefore appear that, gear-wise, 2022 will continue to be a mixed bag.

What does that remind us of: the media landscape itself with its bold and laudable initiatives to retain viewership, to cater to the dwindling attention span of young viewers, to serve its content on multiple platforms and in two orientations?

There are trends and drivers, of course, that clearly point in the direction of IP and the cloud. Control systems which are both format and manufacturer-agnostic, able to cater to the baseband, IP and cloud worlds, and which present all tools as a unified user experience are likely to remain relevant for a few more years.

Likewise, tools that automate the discovery and registration of IP devices and allow operators to tweak parameter settings on remote stageboxes, etc, irrespective of the manufacturer, are more than welcome in a world where more needs to be done with less even faster than last time round.

Security is probably the fastest riser in the opinion polls and will have to be addressed in a way that protects both facilities, clouds and content without slowing down the production process or making it otherwise cumbersome.

Finally, let us not forget the tools that allow operators to monitor their physical, distributed and virtual infrastructures, alerting users to issues before or as they materialise. They are invaluable in a world where almost anything can be connected to everything in one way or another, usually over a single cable.

In summary, look out for more cloud, more IP, and – who would have thought -baseband solutions wherever they make sense to speed things up or to control cost. Obviously, remote, centralised and distributed production are here to stay, while quality and flexibility expectations will continue to rise despite ever-smaller crews.

Having said that, I sincerely hope that this will once again become a matter of heated in-person debates once COVID-19 is under control, and doctors and nurses get some time to breathe.