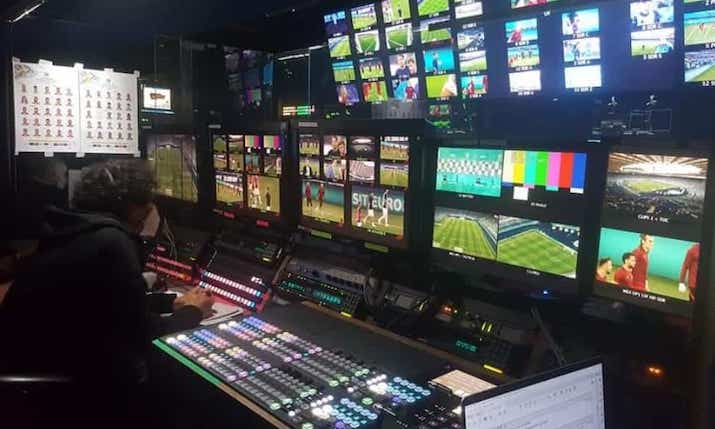 For UEFA Euro 2020 matches held at the Olympic Stadium in Rome, EMG Group commissioned its UK subsidiary Telegenic to produce all TV events, utilising mobile production vehicles and British crews for all matches.

However, due to the difficulties created by the pandemic and the consequent impossibility of moving multiple British personnel abroad, UEFA suggested adding an Italian production section to the basic technical staff.

And so it was done, with Italian EMG associate Global Production called in to offer support.

As would be expected, such an event – further complicated by COVID – involved a huge amount of pre-production starting with the gruelling stages of preparation, booking, personnel selection and co-ordination managed by Gianluca Forno, Nocolò Selvelstrel and Michele Iorio.

It was also deemed essential to have a figure on board who, thanks to a mixed knowledge of technologies and television production, could act as an intermediary between the British and Italian teams.

This figure was Anna Maria Marrone. Marrone’s adventure began on 3 June, when she spent a few days working alongside the British unit manager who was then recalled to the UK. Marrone continued working on all the matches at the Olympic Stadium in Rome from 11 to 20 June and on the quarter final match between England and Ukraine on 3 July, taking on the role of OBV unit manager.

“After 11 years of organising entertainment events in Oman, the Emirates, Saudi Arabia and Bahrain, I returned to the broadcast sector thanks to EMG Global Production and the UEFA 2020 European Championships as OB unit manager,” Marrone explains. “The British are more used to working with this figure than we [Italians] are; it is a mixture of a technical director and a production manager.” 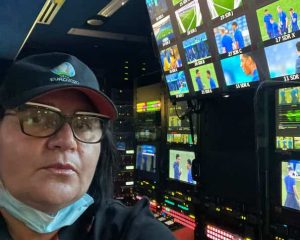 Anna Maria Morrone was called in as OBV unit manager

For UEFA 2020, the presence of an intermediary capable of translating and solving live broadcast problems in real time was immediately indispensable.

“For me, creating a close-knit team and making sure that everything went smoothly was not easy, especially at the beginning. Also, the great tradition of quality British television production prompted us to demonstrate that we were up to the prestigious task,” Marrone adds.

“However, I feel I can say that having a figure on board who possesses technical know-how, production skills and who speaks English has greatly facilitated the relationships of a truly international crew.”

“Having a figure on board who possesses technical know-how, production skills and who speaks English has greatly facilitated the relationships of a truly international crew”

On site, EMG deployed two mobile vehicles: the main truck for multilateral feeds and and a second unilateral truck. With 44 cameras, the main truck guaranteed the multi-camera signal for the host broadcast directed by Giorgio Galli, and a replay section with 12 EVS for 72 channels directed by Stefano Schiavinato inside the Olympic Stadium.

The unilateral truck was in charge of backing up the main vehicle and implemented the four stations of the four unilateral feeds of the right holders. It also managed respective cameras for interviews on the sidelines.

In addition to these two vehicles, three camera stations were set up in a third container, two of which moved from the pitch side to the studio and a third that was dedicated to the unilateral of Germany’s ARD.

The British team also included crew chiefs or guarantees, one for the mobile vehicle, one for the audio and one for the camera department as first operator or supervisor with an assistant, who sorted the cameras and shooting materials to support Italian camera operators and camera controls.

There were three British guarantee room controls (camera 1, camera 2 and one on board the unilateral OB van) to which 12 Italian camera control technicians referred.

“Every match day,” continues Marrone, “the UEFA booking department provided a list of the various slots booked by the right holders (Swiss TV, French TV, RAI, Sky) and my task was to distribute it to the staff on board the Uni truck and facilitate the preparation of shooting activities. Sky and RAI also had their own mobile vehicles on site to carry out the unilateral personalisation.

“An additional four cameras on tripods (Unilateral 1, 2, 3, 4) were bookable as needed by foreign broadcasters for interviews on the sidelines or in stand up positions in the studios in the stands and positioned in such a way as to comply with the various COVID protocols: safety distances, the interviewee beyond the barrier set up in the field, the ENG with operator and audio technician equipped with a microphone boom placed on this side of the barrier.”

For each match in Rome, 44 4K UHD cameras were on the pitch, 13 of which were specialty cameras. In addition there were rear-goal polecams, in goals placed inside the net, a helicopter supplied by UEFA, a box camera, two crane rear goal cams, a Spidercam and a beauty to provide 180º shots of the playing field.

The production also engaged RF links for two steadycams, a shoulder camera and two ENG for pre-match colour images to be used as clips before the match began.

The chosen standard, 4K UHD, was broadcast in Italy on RAI 4K HDR HLG, on TVSAT on channel 210 DVB-S2 and on Sky in 4K UHD with a Sky Q Black or Platinum decoder.

Audio had a complex role to be managed in the project, with each of the 44 cameras having a microphone, as well as pitch-side mics and press conferences with audio mixes including translations into earphones and questions from a remote location via computer. 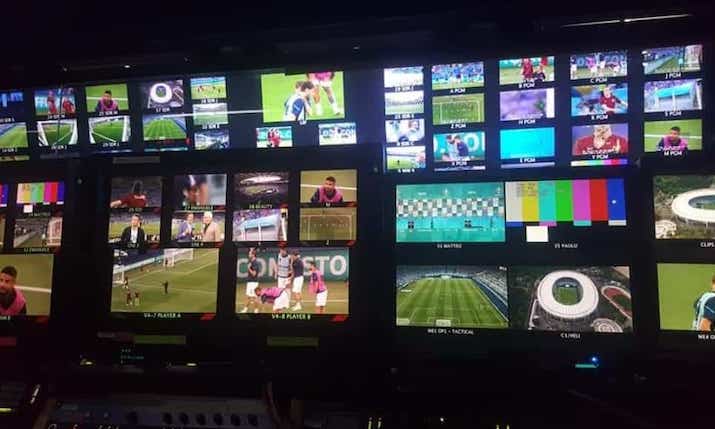 All of the intercom was managed with Telex Matrix 200×200 devices equipped with 64 IP ports to also manage external intercom panels and 24 ports for talkback camera circuits. In addition, 30 analogue four-wire ports and six RTS two-wire loops with the addition of a base station were used for walkie-talkie radio management.

The whole system had to be totally revisited and set up according to Italian use as English crews normally prefer to have the director’s communication armoured on all circuits always open to everyone. In Italian productions the director usually prefers to have separate nodes and circuits that open and close as needed (camera circuit, floor manager circuit, production circuit, camera controls, etc).

“The commitment was massive and exhausting,” underlines Marrone. “The day before I received the schedule for the next day from the broadcast venue manager for the activity plans relating to match day minus-one, match day and preparation days.

“This programme also included slots for the various alignments and checks of the signals with the TOC and the IBC; and then the alignments for the 16-metre cameras of the VAR, the verification of camera 1 and the microphone.

For off-site events, the signals to the OB-TOC-IBC were guaranteed by the ENG camera connected to an Aviwest mobile data transmission system.

“The production of the match-day began in the morning with the TOC and IBC alignments followed by the technical tests with the OB van, the director and the verification of the cameras and the VAR at 14:00. This was followed by the realisation of the pre-game up to 18:00 or at 21:00 the filming of the actual match,” Marrone adds.

An army in production

In all stadiums, the presence of the public was determined as a percentage of the capacity of the stadium itself and the progress of the pandemic in that location; for example, in Rome the presence was only up to 20% of capacity.

Indeed COVID added to the complexity of the event, with staff spread over three hotels, constant safety announcements, temperature controls, preventive swabs on the crew most in contact with the players, and the need to wear masks when onboard mobile vehicles for many hours every day.

An exhausted but satisfied Marrone comments: “If ever there was a need, we have shown once again that we Italians in TV production are second to none! Thanks to the great professional preparation of the Italian production team and technicians we have largely satisfied the expectations that a production of this kind requires. Obviously, I cannot fail to mention our English colleagues who, with equal professionalism and meticulousness, did their utmost to make our success their success too, a beautiful example of professional and personal integration.

“During the first game and the opening ceremony, the filming by Giorgio Galli and those in slow-motion by Stefano Schiavinato and all the EMG Global Production team were celebrated by the BBC and ESPN with compliments also from the IBC: a great satisfaction for everyone.”

UEFA Euro 2020 concludes on Sunday 11 July with the final at Wembley between Italy and England.

Read more about the host broadcast set-up for Euro 2020: https://www.svgeurope.org/blog/headlines/uefa-euro-2020-the-host-broadcast-facts-and-figures-for-the-tv-coverage-of-europes-biggest-football-show/