On 6 June ‘broadcast innovator’ Martijn Swart will be awarded a Media Diamant (Media Diamond), the Dutch award and recognition for people working behind the scenes in television, radio and online media who excel with talent, dedication and passion. Swart was surprised by Dutch F1 commentators Olav Mol and Jack Plooij after the Monaco Grand Prix in Monte Carlo on Sunday. 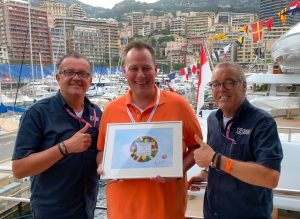 Mol presented him with a letter from Mayor of Hilversum Pieter Broerties with the message that he will be awarded this prestigious prize next week. As co-owner of Broadcast Rental, Swart is closely involved in the live connections the company provides around Formula One.

Swart started his career 20 years ago at CineVideo Group (now United, part of Euro Media Group), where he became a video editor & tape/LSM operator. He emerged as one of the driving forces behind ‘tapeless working’ in the Netherlands and the transition from Digital Betacam tapes to file-based production.

In 2005 he continued as a freelancer and made his knowledge available to other companies in the role of operator and consultant in which he travelled all over the world. For EVS, he was responsible, among other things, as a workflow architect for the innovative and tapeless approach of Fox Sports Eredivisie in The Netherlands.

In 2009 he advised Geert Paul Slee when he started his company Broadcast Rental and in 2013 he became CTO of the company. Swart and his team were responsible for countless technical achievements in Holland and abroad: from wireless cameras hidden in the KNVB (league) cup; on stage with U2; or live radio and television from a hot air balloon for Talpa Radio. For the Formula 1 broadcasts, Swart improved an existing remote workflow that is used by no less than seven international broadcasters.