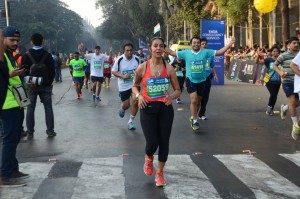 Broadcast RF chose Domo Broadcast SOLO HD transmitters and PRORXD 8-Way Diversity RF system for coverage of the 2017 Standard Chartered Mumbai Marathon on 15 January. It is the largest marathon in Asia as well as the largest mass participation sporting event on the continent.

Broadcast RF set up and managed the wireless camera coverage over diverse terrain on the 26- mile marathon route. The marathon started opposite Chhatrapati Shivaji Terminus Mumbai, and subsequently passed many of the city’s iconic locations such as Flora Fountain, Marine Drive, Chowpatty, Haji Ali, Mahim Church, and the Bandra–Worli Sea Link.

Ground-based terrestrial receive set ups are essential for such events because the use of relay aircraft in cities such as Mumbai are often unavailable. Live video transmission from multiple city sites can be difficult due to numerous high-rise buildings, underpasses, and sometimes dense foliage. Coastal areas can be equally challenging due to low-rise structures and limited reflective surfaces. The Mumbai Marathon includes both, but despite those obstacles, Broadcast RF’s setup achieved flawless video coverage.

Broadcast RF Project Manager Paul Wolff said, “Despite numerous physical obstacles, with Domo’s transmitter and receivers we achieved 95 percent coverage, which is remarkable given the numerous physical obstructions throughout the race route. However, the placement of the Domo receive points and the robust nature of their technology enabled us to capture far more than had previously been possible.”

To do this, a main switching hub and final decode station was established on Mumbai’s Trident Hotel so Broadcast RF’s intelligent auto-switching technology could receive signals from two other high-rise receive points along the marathon route, taking live footage from roaming camera’s equipped with Domo HD transmitters and forwarded to the main OB site in Azad Maidan, where the footage was mixed and sent to air. Domo’s PRORXD 8-Way Diversity RF system, a feature-rich, multi-way COFDM receiver, was central to Broadcast RF’s ability ensure that transmitted video was free from distortions typically associated with fading and multipath interference.

“We do a lot of events such as the Mumbai Marathon, which is why we choose Domo for projects that require widespread, shall we say, mission-critical diversity,” Wolff added.