Broadcast RF has announced completion of its second live trial for the new Velo4G onboard-bicycle camera platform at the Tour of Britain, Britain’s biggest international cycling race. It is also set to release Velo4G Lite, a smaller unit can be mounted on the handle bar of the bike to offer forward or rider facing shots. 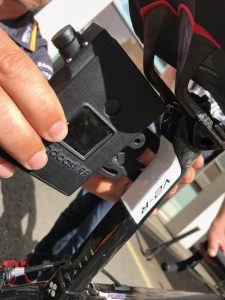 Broadcast RF’s Velo4G device is clipped to a bicycle

At Ride London in the summer Broadcast RF worked with fellow Euro Media Group company, VideoHouse, to carry out the first trial of Velo4G, looking at the practicality of the kit and what it could achieve. Velo4G is a completely autonomous system and can be operated as the only RF system on a race event. These new cameras were fitted to bicycles using 4G LTE to transmit footage. Two were used on the women’s Classique race, and two on the men’s Classic. The testing of the Velo4G camera, which only weighs 200g so does not inhibit riders’ performance, was positive.

The second trial, carried out last weekend at Tour of Britain, was specifically designed to test the equipment, looking at the level of control of the cameras and the quality of images when using 4G in rural areas. In the Eurolinx and VideoHouse facilities production of the event, Broadcast RF rigged motorbikes and cars to monitor the mobile network and images.

Chris Brandrick, commercial director at Broadcast RF, told SVG Europe that while the public mobile network along the course was, as expected, variable, Velo4G has been designed to take that into account. He said: “We found it as everyone would on a mobile phone; in rural areas, when the network switched from 4G to 3G and sometimes no ‘G’, it was difficult to transmit images, but this system has already been developed to work around that. 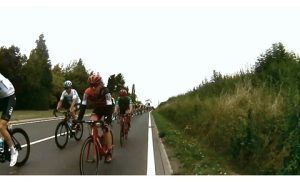 Rear view at Tour of Britain from a Velo4G camera

“Velo4G has a Store and Forward function,” he explained. “When the connection is poor or you don’t need footage from a specific camera, you can turn off the streaming connection and it instead records onboard. When you trigger a request to bring those pictures back, it sends the last one or two minutes-worth of footage recorded back in a burst, at a far higher bit rate than when using live streaming in an area of poor connectivity. That burst results in a higher quality image, so the beauty of Velo4G is in a rural area, you don’t need to use it live.”

When in Store and Forward mode, the units send thumbnails to the company’s RF hub, which allow operators to see the type of shot the camera is offering without burning through data. Said Brandrick: “They are like mini EVS machines, and lots of them!”

Streamlined system for the future

Once the cameras are fitted to the bikes, they run at a very low power consumption which means there is an extended standby time pre-race. “We would expect a live transmission time of around about two hours, after four hours in standby mode,” he added. 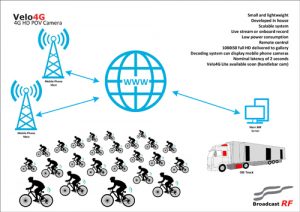 Additionally, the system can run exclusively on a 4G network at the OB. Dedicated internet provision obviously helps the system, but is not necessarily required.

Certain camera parameters can be adjusted remotely by the Broadcast RF team, which can control and adjust video bit rate and video format on the fly.  The decoding system at the OB can decode the live video and playback to recorded footage in 1080i50. The decoding system is not only limited to Broadcast RF’s Velo4G units, it can also decode live mobile phone pictures from anywhere in the world, in full HD resolution with only a two second delay.

On how this system could be used by teams or Federations, Brandrick said it would be possible to equip an entire peloton of 50 riders with Velo4G, using live streaming from maybe four key riders within the group to observe what was happening, and then using Store and Forward from other cyclists to get replay images of incidents or battles on the track. “You can use live feeds to keep an eye on activity on the track and then use Store and Forward to get a higher quality picture of specific events or angles. That’s the beauty of this system,” Brandrick noted. “In our own RF monitoring vehicle we can watch the race live on 4G, and pass the stream onto the OB if we want, but if an incident happens we can trigger the Store and Forward function on bikes around the incident to find the best angles on what happened. That feed can take a minute to get hold of, or maybe longer in a rural area, but when you have it you have footage that is higher quality than a live stream, to be used for replay.” 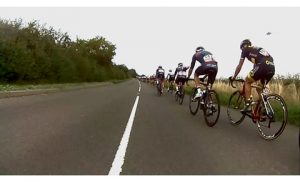 Velo4G is the evolution of Broadcast RF’s VeloVue live onboard camera series, VeloVue Track and VeloVue Road. VeloVue Road had to operate through an RF relay aircraft, and also lacked autonomy, which is why Broadcast RF developed the highly scalable, fully autonomous Velo4G. “The VeloVue Road was successful, but it wasn’t quite flexible or affordable enough for the purpose,” commented Brandrick. “So we developed this scalable, affordable way of sending live onboard images, which means you can equip the whole peloton.”

Broadcast RF carries out all its technical development inhouse, meaning it has control over all the units it develops. Brandrick said this means the company can customise equipment specifically to a team’s or Federation’s requirements, even using 3D printing to create dummy copies of hardware for new design approval.

The next phase of this project is to build Velo4G Lite, a smaller unit that can be mounted on the handle bar of the bike to offer forward or rider facing shots. This will require a separate device mounted at the back of the bike which wirelessly connects to the Velo4G Lite.  Alternatively, the Lite version can connect to a close by Velo4G. The amount of Velo4G Lite’s that can be deployed are unlimited, said Brandrick, and each has the same functionality as the Velo4G onboard cameras other than GPS.

Going forward, Broadcast RF hopes to be able to add data functionality into Velo4G, allowing the cameras to relay biometric and telematics data from riders and bikes, working in close partnership with the road cycling community, Brandrick said.

Concluded Brandrick: “4G onboards are in their infancy, but we are confident this is truly a game changer for road cycling and other applications requiring cost effective remote POV camera solutions. 5G is coming; it’s not here yet, but can only improve the quality of the pictures and the amount of data we can bring back at any one time. We are very much keeping an eye on how 5G technology can be used for this and other broadcast applications.  Our technical team inside the Euro Media Group have formed a working team to discuss with telecom companies how we can bring this technology into our marketplace and incorporate into broadcast applications.”