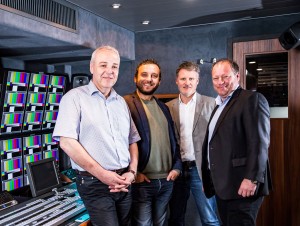 In May 2017 Slovakian television network Televízia Markíza commissioned its new HD OB van, which marks the completion of their transition to HD. The OB van is based on Broadcast Solutions GmbH’s Alphaline A12 model and can work in productions requiring up to 16 cameras.

Alphaline is a variant of the company’s successful family of Streamline OB Vans of which more than 40 units are already built by the German system integrator working all over the world. With Alphaline, Broadcast Solutions offers the customers additional possibilities in terms of individual coachbuilding, workplace design and technical equipment.

Teaming with Slovakian system integrator ELEKTONIKA both companies provided a universal OB van with the latest technical solutions enabling Televízia Markíza to handle a large variety of productions. A second important purpose of the OB Van is dealing with is its use as disaster recovery solution for the studios of the company. An additional novelty in Alphaline OB vans is the use of Riedel’s MediorNet system as a decentralised signal routing and communications backbone, achieving the flexibility the customer demanded of its OB Van.

The resulting OB van offers the customer TV Markíza maximum flexibility and is a future-proof production tool to be used in the network’s own large productions, like Let’s Dance, as well as in chart-shows or sports events.

“The OB Van was the missing link to complete our conversion to HD and is a major step to increase our viewers base, for instance with our own productions like Let’s Dance. Further on the OB gives us the flexibility to produce all different kinds of events, which makes the company more independent,” says Matthias Settele, General Director at Televízia Markíza. 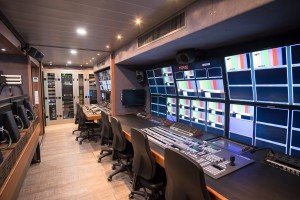 In short, this universal OB Van serves two main purposes for Televízia Markíza. It is used in different sized productions – from large 16 camera to smaller productions and works as a backup and disaster recovery solution for the studios. The customer was looking for a flexible and versatile OB Van rather than a massive flagship truck and Broadcast Solutions’ Alphaline A12 serves this purpose perfectly.

According to Zdenko Ryšavý, technical director, Televízia Markíza opted for Broadcast Solutions’ OB Van in order “to get the best solution on the market, to secure live broadcasting and to have an OB Van that is as universal as possible. Our main goals are to have a tool for disaster recovery and to use it for double productions.”