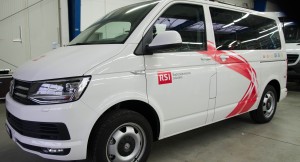 Based on a Volkswagen T6 Van the vehicle is used for covering football and ice hockey events with slow motion and super slow motion cameras. The van will be working together with larger OB vans from RSI to increase production possibilities.

Radiotelevisione Svizzera (RSI), part of the company SRG SSR, is a broadcasting company based in Lugano, Switzerland. RSI is responsible for the “Rete” radio programmes (Rete Uno, Rete Due and Rete Tre) and two TV programs (La1, La2). Their information and entertainment content have a reach of about 650,000 Italian speaking people in Switzerland.

The vehicle delivered by Broadcast Solutions is equipped with a SONY HDC-3300R / HDCU-3300R camera system with Fujinon x88 lense. For storage and replay an EVS XT3 USB with 8 channels is in use, while signal processing is handled by a SAM IQ modular system. In the vision area two 17” Panasonic and four 9” Sony monitors are working in conjunction with a Harris eight-channel multiviewer system.

In a production setup, slow motion material will be shot and edited with the T6 and then transferred to larger OBs. During production two operators can work easily in the van.