Broadcast Solutions has begun the delivery of a large order for the state broadcaster for Belarus. Belarus TV has commissioned four production sets to Broadcast Solutions, one of Europe’s largest system integrators. Each set comprises an 18 camera HD OB Van, a four camera HD flightcase studio and a support vehicle. 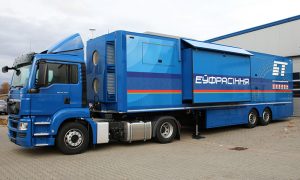 The first two production vehicles left Broadcast Solutions’ production facilities in December 2018 and the bulk order will be completed by April 2019. Until this date, the other identical sets will be delivered to the customer at regular intervals.

The reason for Belarus TV’s order (also known as BelTV,) are the second European Games to be held in June 2019 in Minsk, Belarus. To capture this major event comprehensively and to produce to international TV standards, the state broadcaster commissioned the vehicles and flight case studios.

One key factor that drove the customer to choose Broadcast Solutions is the company’s ability to respond to customer requests and deliver projects even of this size quickly.

Yuri Kolyachko, CTO at BelTV, commented on the project and working with Broadcast Solutions: “When building the four production sets, for us it was important that our partner has all the experience and capacities to deliver such a large project in a very short time, without compromises regarding outstanding quality.”

Kolyachko added: “Broadcast Solutions provided excellent support during planning and production, and the first vehicles we have already put into service fully meet our expectations. We feel in good hands with Broadcast Solutions and look forward to the first productions with the new tools. They will elevate the level of television in Belarus decisively.”

All four OB vans have an identical design and work as 20 ton semitrailers with two extensions and with up to 18 cameras in HD: two wireless, two SuperSlomo and 14 standard HD cameras. Each of the flight case studios is designed for four cameras.

Part of each production set is a 26 ton support truck, which ensures the necessary independence during productions. Besides the usual storage space, the support truck is equipped with a 62 kW generator and restrooms for the production crew. The restrooms also have a kitchenette including self-sufficient fresh water supply.