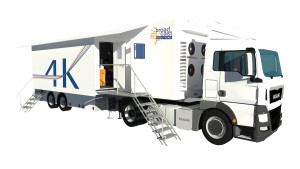 The Streamline Family of OB-Vans consists of pre-engineered OB Vans with short delivery time but without restrictions on quality and up-to-date equipment. Of course, all Streamline OB Vans can be delivered in a 4K/UHD model.

The OB Van for South Korean broadcaster SBS works with up to 12 4K/UHD cameras on the basis of 12G-SDI UHD Single Link in combination with Quad Link 3G-SDI as well as hybrid IP-systems. This new OB Van is the first realization of the new Alphaline concept, which Broadcast Solutions developed on the basis of the Streamline Family concept.