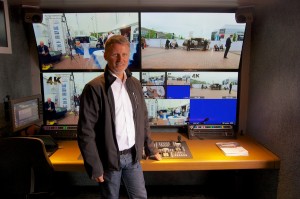 Broadcast Solutions has updated its range of Streamline OB vehicles to make them much simpler to upgrade to Ultra HD (mainly via software licenses). It showed its first UHD OB at IBC2015, the new eight-camera S8 4K, but its other four vehicles (ranging from four to 16 cameras) are also being made UHD ready via new core technology, such as routing, processing and Stagebox connectivity.

The vehicles use a unified design to save money and make them quicker to build. “It’s not a showstopper to buy a standard OB van right now for 4K,” said Rainer Kampe, Broadcast Solutions’ CTO. With an increasing number of UHD TV sets being bought by consumers, and the launch of new UHD channels, he believes that the lack of UHD content means that there is an opportunity there for OB companies to fill the gap.

“It’s not only for the big sports productions. We show we can integrate 4K in our standard series for small productions [as well].” He believes that as much as 80% of today’s HD production could easily move to UHD now. The only real problem is for live super slomo, and this should be possible by the end of the year.

The main difference between the company’s new standard configuration and being ready to produce UHD will be the fitting of extra inputs and outputs to routers and vision mixers (because of the quad HD signal), plus licenses for upgrading the cameras, and 4K down- and up-conversion.

The premium for this should be about 10-15%, but as the Streamline design means vans are available nearly off-the-shelf, allowing them to be delivered quickly and with significant cost-savings, this should counteract the added costs, he claimed. 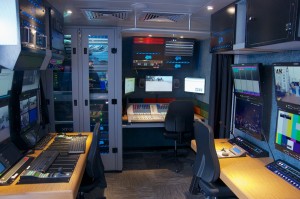 The truck can accommodate up to nine workstations

“We decided to go for Imagine Communications’ router and integrated multiviewer both on functionality and price, and our audio/video interface is based on MADI, which gives customers a choice between different audio mixers,” all of which can be integrated in the same way, explained Kampe. “It’s the same with the cameras and vision mixer, it’s the customer’s choice – as long as it fits the I/O concept of the van.”

For the S6 and S8 Streamline vans it has chosen the AVB-based Riedel Tango intercom while the core processing is done using Riedel’s new MicroN (for embedding/de-embedding and frame synchronisation). This will allow the MediorNet Stagebox system to be added very easily, so that users could have a direct connection with other OB vehicles without requiring additional equipment.

It has also standardised on L-S-B Broadcast Technologies’ VSM IP-based control system “because of its flexibility and scalability”. In the Streamline S12 and S16 VSM is implemented with its full feature set, while in the S4, S6 and S8 VSM offers video and audio router control, vision mixer control with tally and labelling, multiviewer tally, labels, GPIO, tally and several LCD panels, depending on the Streamline version.

Customers can also choose which monitors they want, although they have to fit in with the mechanical dimensions of the workplaces, as there are limits on how they can be customised. 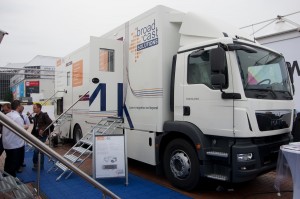 The self-contained S8 attracted a lot of interest at IBC2015

“One of the main reasons we decided to build a standard OB van was to be cost-effective for the customer. We didn’t want to have to re-invent systems design every time,” he added.

For the larger Streamline OBs there is a Lawo audio console and routing, “which gives very good integration with VSM, and gives the freedom of configuring it to meet customer needs.”

There was considerable interest in the S8 4K at IBC because visitors “like the concept of having a compact OB van with storage in the rear, so there is no need for an additional truck. It fills the gap between the Sprinter-type vans and large trailer OBs.”

The 12-ton truck with a box body measuring 9.85×2.25×3.5m (LxWxH) can offer up to nine work places and is equipped with UPS and encapsulated low noise racks for equipment. There are two air conditioning options for working in harsh climates (up to 55° C).