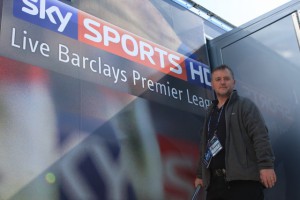 Martin Knight, BSkyB Sport, technical producer, on the steps of one of the Visions OB units BSkyB will rely for its Champions League final coverage tonight.

Sky Sport’s coverage of the Champions Final kicks off at 1900 tomorrow and while much energy will be placed on pre-game, halftime, and post-game analysis, the network is also looking to give its coverage a different look from UK over-the-air commercial broadcaster ITV which is also carrying the match. Key to those efforts will be having a high-speed camera located behind each goal diagonally across from each other.

“The difference [between our broadcast and ITV’s] may be the hi-motion so you don’t want to wait until the end of the game to use that,” says Martin Knight, Sky Sports, technical producer. “We may have fantastic hi-motion of a decision that causes a penalty or a leg sweeping through  knocking Frank Lampard or Didier Drogba down or a replay of a goal.”

It can be difficult to cut into another director’s feed but another tool at Sky Sport’s disposal is a camera with a long lens that will be mounted up high and near the Camera One that Sky Deutschland will use as a major part of covering game action for the international feed. So if there is a hi-motion shot that Sky Sports would like to use they can cut to that replay and then cut back to their own camera one and then switch to the international feed camera one during the next time Sky Deutschland Director Knut Fleishchmann cuts to a replay or low camera angle.

“It’s dangerous but doable, and being in here in Germany we are fairly safe because we know how they cover the game,” adds Knight.

Knight and Sky Sports were host broadcaster last year at Wembley Stadium so the team is well versed in the challenge of remaining objective as last year Manchester United defeated Barcelona.

“Last year we were almost over the top to remain as neutral as possible even though ManU was playing,” he adds. “But Sky Deutschland has a [domestic feed] added on to the world feed so they can be as biased as humanly possible.”

Sky Sports operations, leaving aside the potential drama of cutting in shots from unilateral hi-motion cameras during the match, will focus on pre-match coverage that shows the teams arriving, and other announcements like the lineup and formations. Visions OB units are on hand for the productions.

“The whole thing builds up the actual match,” says Knight. Then during the first half feeds and coverage are recorded in the OB unit for replay and analysis needs.