BSkyB steps up coverage for Super Bowl with help of NEP 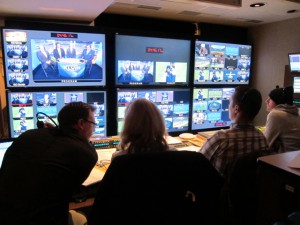 BSkyB this year stepped up their Super Bowl presence, taking advantage of the tight bonds with Fox Sports and also making sure it met the needs of a UK-based NFL fan base that seems to be growing and even has the NFL itself expecting to launch a franchise there by the end of the decade.

“Our audience figures are growing really well, especially with the games in London,” says Keith Lane, BSkyB, director of operations who oversaw a team of 20. “And the Super Bowl is a spectacle that even people who are not the biggest fans of the NFL will watch. And given that it is one of the biggest sports events in the world we want to have a good presence here as we are committed to the NFL.”

BSkyB’s physical presence included a studio in Metlife Stadium, an Adobe Premier edit suite at the Millennium Hotel on Broadway, and production out of an OB unit from NEP, the Trio Video Phoenix unit.

“We’ve been here for over a week and did a lot of work with Sky Sports News and at the Millennium edit suite we built features for the pre-game show,” says Lane. 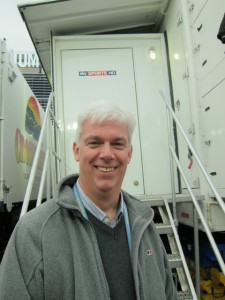 Keith Lane, BSkyB, director of operations, says the bigger Sky presence this year made a difference in the quality of coverage.

The operations at the hotel were co-located with four edit suites that were in operation for the Fox Sports domestic broadcast. BSkyB had access to footage on that operation’s 48 TB SAN.

“Because we are fully on site we have more access to material,” says Lane.

As for game operations themselves, EVS XT3 servers in the Phoenix unit allowed packages to be played back within the broadcast. BSkyB relied heavily on the Fox Sports dirty feed but then dropped in packages during commercial and other breaks.

“Previously we would do graphics downstream but this year we have the whole production here,” adds Lane. “And our relationship with Fox allows us to have a lot of feeds from them as well as the NFL’s world feed. And for halftime we took the world feed.”

Two fibre circuits from Level 3 connected Metlife Stadium to BSkyB’s London facility and the NFL world feed also was transported across the Atlantic Ocean as an ultimate backup.

Budgets allowing, expect BSkyB to continue to take this approach with Super Bowl coverage as the popularity of the NFL within the UK will only continue to grow. And with the potential for a London-based franchise to eventually become a reality any efforts today could mean a big payoff tomorrow.