BT in talks to commercialise use of 5G non-public networks 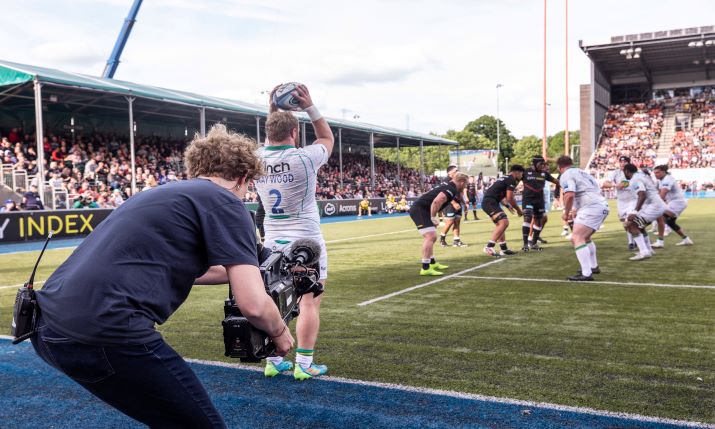 BT Media and Broadcast is speaking with sports clubs around the UK about commercial implementations of its recent 5G non-public network trials.

Over the past few months, BT Media and Broadcast has worked with a host of partners on a series of projects to demonstrate how 5G networks can be used for live broadcasts.

Speaking with SVG Europe, BT Media and Broadcast head of futures John Ellerton hailed the success of the projects and said BT was now looking to commercialise its offering.

“We’re now talking with a number of UK sports clubs to consider whether we build this into our TV OB fleet. And if enough of them want to buy it, we’ll turn it into a commercial service”

In May, BT Media and Broadcast worked with University of Strathclyde and its spin-out company, Neutral Wireless, which deployed a pop-up private 5G standalone network at the Saracens v Northampton Saints rugby match. Vislink provided camera encoders and transmitters for the BT-led project, which saw pitch side UHD cameras made available for BT Sport’s live coverage of the match.

“That was very successful,” said Ellerton. “And it showed the way in terms of sports broadcasting, making use of non-public, 5G networks.

“We then evolved the architecture, working again with the BBC and Vislink/Mobile Viewpoint, this time on the Commonwealth Games. Ericsson was also involved, providing the 5G cell.

“That project was about remote production, with feeds delivered to a gallery at BBC Broadcasting House. The feeds from the Mobile Viewpoint units went straight over the 5G network as IP streams, over the internet, then back to the Broadcasting House where they were turned back into vision feeds and then mixed in the gallery into the programme. So that that was live remote production to air and then to a global audience.

“The third strand is our participation in the IBC Accelerator, which was effectively 5G broadcast in the middle of nowhere, where we worked with a number of parties, including the BBC, Vislink and Neutral Wireless again, but it was coupling 5G, non-public network cells with backhaul over things like the Starlink satellite network, so that you can go live from anywhere.

“And so we did a Maori festival in New Zealand, we did Kenya, and we did the National Ploughing competitions in southern Ireland. And, we did the Highland Games in Scotland which we showed during IBC in September. And in all cases, we were able to go live from a venue that didn’t have fibre connectivity.

“We used Mobile Viewpoint to bond together low Earth orbit satellite connectivity and 4G and 5G connectivity in backhaul to bring the pictures back. It’s exciting because it shows the next generation of what we’re able to do with all of this wireless connectivity, that is naturally IP so it’s bidirectional and you can therefore send the camera pictures out and you can get the gallery return back.

“And at the same time, you can do comms, tally and camera control for shading over the one IP connection, which is very powerful.

“So for us, those three trials have now taken us to the point where we are making preparations to commercialise it. We’re now talking with a number of UK sports clubs to consider whether we build this into our TV OB fleet. And if enough of them want to buy it, we’ll turn it into a commercial service.”

The next stage, said Ellerton is to assemble the technical solution and test its robustness, and to establish whether it is best to install antenna panels at particular grounds or have the antenna panels and electronics within BT’s OB vans.

“It’s now fine about fine-tuning the proposition to work out what’s most useful for people. Is it best to provide the infrastructure so that the broadcast production companies can use it in Premiership games? Is it to provide it to the football club so they can use it for capturing footage at training grounds and for friendlies? Or it might be useful for filming outside the stadium to see fans and teams arriving. There’s so much potential here, what we want to do is explore the value.”

“We don’t know when that will happen, but when it does we will be able to provide connectivity to broadcasters across the public network,” said Ellerton.

“And we will commercialise services that then allow broadcasters to bring content directly into the broadcast network and directly then into their studios over existing broadcast infrastructure.

Connectivity is one of the subjects that will be featured at SVG Europe’s FutureSPORT event in London on 15 November 2022. Find out more: https://www.svgeurope.org/future-sport-2022