BT Sport bagged another ‘world first’ at IBC last week by successfully demonstrating 5G-enabled multi-location live remote production — but the application throws up as many questions as it does opportunities.

The advantages of remote production – reduction in cost, better work-life balance for employees, reduced carbon footprint and the ability to produce more games – is all good for fans, but not game-changing.

“The real gamechanger is when you combine remote production with producers who understand how to exploit the new technology; how to make the most of the new freedom, including the creative flexibility of wireless cameras,” said Matt Stagg, director of mobile strategy at the pay TV broadcaster. 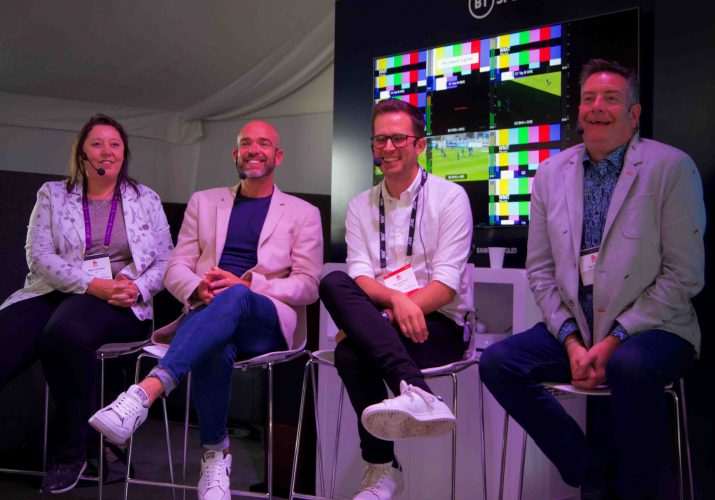 Jamie Hindhaugh, BT Sport COO added, “I am excited about the creativity. When you start untethering cameras then you don’t need to book RF points and the perception is that you have 14 cams when you’re only using ten. We are very interested in how 5G’s high bandwidth network can integrated with the classic OB van.”

“Rights owners should be looking at remote production more closely,” urged Paolo Pescatore, analyst at PP Foresight who chaired a Q&A at the demonstration. “It represents a great way for them to improve the quality of their asset, reach sports fans and keep them engaged in a much more efficient way.”

This time, live feeds from three stadiums in the UK, where matches in the FA Women’s Super League were playing, were connected over EE’s 5G consumer network to the broadcaster’s production hub at Stratford and routed on to the OB park at the RAI. Andy Beale, BT Sport chief engineer, switched the feeds live.

Reporters at the venues – Stamford Bridge (Chelsea); The Emirates (Arsenal) and the Etihad (Manchester City) – carried 5G HTC dongles and conducted a live four way broadcast between each other and the RAI.

“5G allows broadcasters to pay for what you need with agile specifications that don’t exist with 4G,” Beale said.

Even 4G cellular bonded links had been a “best effort” from a network perspective, Beale said, especially in congested places like stadia, and even with relatively low attendance figures of 6000 let alone 60,000 fans.

“You couldn’t throw much at it; it was never your priority feed,” said Stagg. “5G will be a rock solid service. It will guarantee performance.”

Network slicing guarantees broadcasters a minimum standard of speed and throughput with 100 megabytes per second lower latency. As a result, OBs will become far more efficient.

“5G is superior to satellite for connectivity,” asserted Stagg. “The ability to network slice — to take a part of the network and put a service wrapper around it – will enable a broadcast grade network.”

Provisioning the network for something like breaking news should be as quick and easy as going to a web front end and entering the postcode, specifying an amount of bandwidth and an amount of time. “That’s our aim,” Stagg said.

Gemma Knight, football match director for BT Sport expounded on the benefits. “For lower-tier sports like the National League we might start with the manager at home, then travel on board the team bus, film arrivals and interviews in the changing room. Then you can reposition the cameras for the position. It makes it look like you have a lot more facilities.”

She added that she felt trust in the reliability of the feed. “You want to know that when you cut, it is going to be stable. That’s huge for a director. Plus, it means I don’t have to travel long distances or overnight at a venue and I can spend more time with my son. That opens up a world of opportunity for me.”

BT Sport’s pitchside reporters were able to follow video of all live games on their mobile device enabling them to deliver a more up to date and informed goals update to viewers.

The broadcaster is developing apps including in-stadia AR such as instant playback of a penalty goal for spectators to watching a holographic view of the match “with the ability to walk around the field of play and see replays from every conceivable angle.”

It envisages that stadia could be ringed with a vast array of remote operated cameras catching every possible angle and giving a total field of view.

Switching between two or more cameras at one location

Such exotic consumer applications are being lined up for the introduction of the full next-generation 5G core network, enhanced device chipset capabilities, and increased availability of 5G-ready spectrum from 2022.

Amid all the excitement there are multiple challenges and wrinkles. For a start is not likely to be the main connectivity solution for every event for some time, possibly ever.

“We want to bring pictures back in the best quality we can, so if there’s fibre to the venue we will use it. If we want more flexibility with cameras will mix in 5G and if we need to use 4G we will bond it.”

Switching between two or more cameras at one location over 5G is another hurdle, as is cutting between 5G enabled and other contributed feeds in synch.

“One discussion with the standards bodies is getting to the ability to time signal in 1 millisecond so over a mobile network you will be able to get a PTP clock,” said Ian Wagdin, BBC senior technology transfer manager. “That means I can genlock cameras over the mobile network. That breakthrough will be of massive importance.”

BT Sport and the BBC, in the guise of Stagg and Wagdin, represent the UK’s creative industries on 5G to mobile standards body 3GPP.

“Among other things we are discussing is how do you tell a story when handing off a 5G video feed? We need to have an integrated workflow,” Wagdin explained.

There were calls for bonded device vendors to start working with 5G chipset manufacturers to bring 5G links gear to market.

There is also the contentious issue of spectrum use for media-specific applications like remote production.

“Traditional broadcasters are under an immense amount of pressure,” said Pescatore. “Valuable spectrum has and will continue to be taken away for reuse of rolling out mobile networks.

“Freeing up more spectrum for super-fast 5G networks will mean better TV experiences for everybody, as well as helping fulfil obligations for rural coverage and meeting mobile demand. In essence, it solves a lot of problems.”

Asked whether 5G would be the de facto standard for remote production by 2030, BT M&B lead propositions manager Alison Hutchins said, “No”; Matt Stagg said it would depend on the sport and the tier of sport; and Wadgin said, “Yes. There will be no other way.”