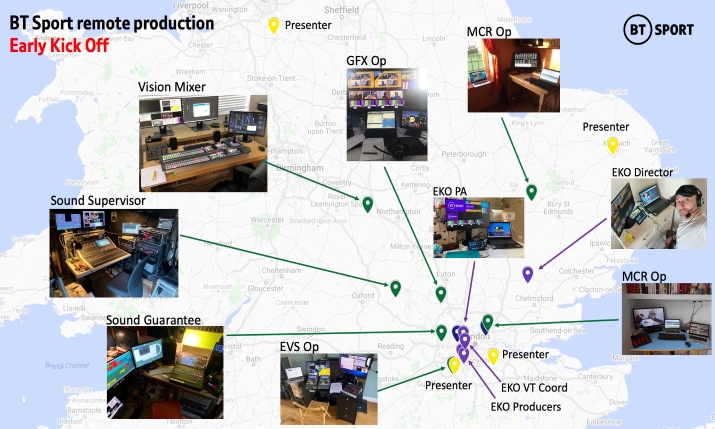 BT Sport has revealed that it will move permanently to a fully remote, distributed production workflow for more of its content, including coverage of the Premier League. This move brings forward its vision to go fully remote by 2023.

The broadcaster is building on the strategy it first outlined on stage at SVG Europe’s Football Summit in February 2019, which was to be able to operate fully remotely between 2021 to 2023, inspired by its world-first remotely produced live broadcast over 5G in November 2018.

This strategy has been accelerated by the coronavirus pandemic lockdown and BT Sport’s innovative remote decentralised production using a virtual gallery that it rapidly pulled together three months ago to enable live broadcasting to continue.

Jamie Hindhaugh, BT Sport’s chief operating officer, told SVG Europe: “With all the different innovations we’ve worked on in working from home and remote over the last 12 weeks, it won’t surprise you that with our return to the Premier League, we have fast-tracked our plans and will be doing Premier League in full remote production.”

This is a permanent change to the way BT Sport previously broadcast the Premier League. “This was our original strategy; we’ve just fast-tracked it. That’s absolutely the ambition,” he said.

The Premier League will kick off on Wednesday 17 June, and BT Sport is set to show 20 Premier League live matches, 12 more than it was scheduled to show prior to lockdown. BT Sport’s first matches will take place on Saturday 20 June, with a double header of Watford v Leicester at 12.30 followed at 3pm with Brighton v Arsenal.

To facilitate the production of the Premier League games, BT Sport is utilising and developing a new remote operating centre in High Wycombe, Buckinghamshire, in partnership with Telegenic, “so our match coverage will be anchored from High Wycombe,” Hindhaugh said.

Meanwhile, its match presentation remote coverage will be anchored in Stratford from its studios. “Within both of those teams there will be roles and people that are also linked into those workflows that are working from home,” continued Hindhaugh. “So all of the different learnings we’ve got will come together.”

He added: “The thing to be really clear on this remote production, is we will still be doing 4K HDR. I’ve not seen many people do remote to that level, and we’re the only broadcaster I think [in the UK] that does 4K HDR anyway. So it’s really exciting!”

Hindhaugh said the broadcaster is also set to reduce the number of people required on site at stadiums for each Premier League game as well, for social distancing and also environmental reasons. He explained: “We’ll have less than a third of people on site [compared to pre-COVID-19 staffing levels] and they’ll be predominantly camera operators and engineers.

“On site from an editorial perspective we’ll have a commentator, a co-commentator and a reporter and our main presentation team will be coming from Stratford. Again that [team at Stratford] will be made up with physical pundits but also pundits coming in from home.” 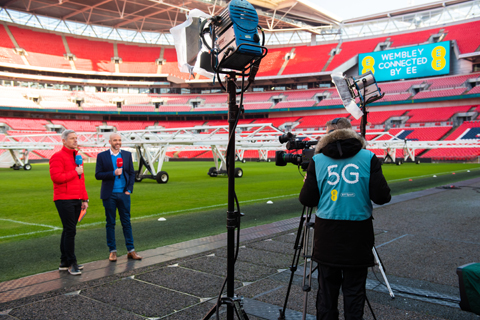 This rapid evolution at BT Sport is a significant accomplishment, Hindhaugh said: “That for me is a huge achievement, and again it goes back to the strength of our partnerships with Telegenic and Timeline TV and our own inhouse team, but what’s also really important is adaptability and the fact that everybody that works with us, whether that’s partners, our own teams or freelancers, have really got behind this.

“It’s the cultural aspect as well as the technological aspect that is challenging and I’m really proud of how everyone has pulled together, to help me make sure we keep people safe, but to make sure we are putting a product on screens that is of the standard everyone expects from BT Sport,” he continued.

The sustainability aspect is key, he noted: “I think it’s a huge step forward, especially with our longer-term drive around sustainability, and we’ll evolve to create more regional operating centres. So we’re also very cognisant of the fact that it shouldn’t just be about people driving to High Wycombe or Stratford.”

To that end, BT Sport is looking at Scotland and other areas of the UK to create a series of smaller operating centres that people in the area can go to for work purposes, that link into the BT Sport infrastructure that will include people working from home.

Hindhaugh likened it to very early on in the coronavirus epidemic when BT Sport scrambled to create its remote, decentralised gallery to enable people to work and produce live programming from home during the lockdown, but, “fundamentally doing that on a bigger scale across the UK, so having the infrastructure in people’s homes but also having somewhere they can travel to, because you can’t always assume people have the space or the connectivity [needed for broadcast production] at home to be able to do this”.

He went on: “Remote production isn’t about reducing the number of people; it’s about driving the efficiency of those people involved, but also our charge on sustainability as well, reducing the need for travel for people.”

On the contentious issue of crowd sound for Premier League matches, which are being played behind closed doors like all other leagues playing at this point in time, BT Sport experimented by broadcasting some Bundesliga games on the weekend of 6-7 June with enhanced sound. It is building on this for the 20 June by giving fans the choice of hearing exactly what it is like within the empty stadiums, or hearing relevant sound for each Premier League team put together from archive match footage by EA Sports working with the Premier League for BT Sport.

Hindhaugh said: “We’ve been working with the Premier League and with EA Sports, which will be providing us with sound stems that basically are relevant to each team that is playing, down to whether they are home or away.”

BT Sport will have a dedicated sound engineer mixing the sound for each game live. “The sound engineer will be watching the game and mixing in the effects that are relevant for the aspects of the game as it goes through. So when a goal scores, you’ll get the cheers and that will be able to be mixed down to whether that is the home or the away team.

He added: “It’s about enhancing the viewing experiencing but also reflecting accurately that you are at a ground where there are no fans. What we’re not trying to do is pretend that they’re there, which I think is really important.”

BT Sport updated its app in March this year

BT Sport is also bringing forward the development roadmap of its ‘Watch Together’ enhancement of the BT Sport app, which is being released in beta in the next few weeks. Watch Together comes from the winner of the 2018 BT Infinity Lab competition, Sceenic. It makes it possible for people to watch live sport on TV and have up to four friends in video feeds alongside the game, set up so you can watch together, see and interact with each other on screen.

Hindhaugh commented: “What we’ve decided to do, because [Watch Together] is still in development, is bring it forward as beta trial. So it will be available early in the Premier League [resumption of matches]. What we’re trying to do is reflect the situation we’re all in; you can’t go to a game, you can’t meet up with your friends.”

On how BT Sports remote live programmes have been received during lockdown, Hindhaugh is pleased: “We’ve had some genuine and some very good feedback. I think a lot of the archive programming we did from home in live environments, the throwback series’, has gone down very well, the programming we did with Gfinity [The BT Sport FIFA Challenge] has been fantastic as an entertainment product. I f you look at it we’ve had a minimum of five live shows going out every week all the way through lockdown, but all respecting the fact that people are at home and social distancing, which I’m really proud of.”

He concluded: “As a UK audience I think we’re very lucky because we’ve got Sky Sports and we’ve got BT Sport, and I think both have an amazing record of bringing innovations that engage fans. From what I’ve seen from Sky Sports that have been announced and ours, there is a real similarity and I think that tells you that both of us will do what we think is right, not gimmicks, but what we think will help our audiences engage better with the game in this situation we’re in.”

Jamie Hindhaugh will be among the speakers at SVG Europe’s Football Summit on 18 June. For more details, see below.