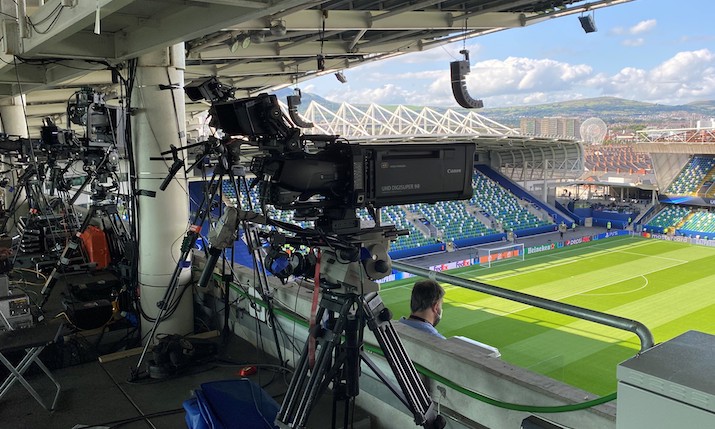 Chelsea got its 2021/22 campaign up and running by facing Villarreal in the UEFA Super Cup on Wednesday 11 August. The showpiece was also a chance for UEFA to trial a central HDR production for the first time.

This was the first game of the new rights cycle for UEFA rights holders including BT Sport which was host broadcaster for the occasion.

“This is one of the events that UEFA takes a special interest in since its part of the Finals Suite of events alongside the Europa League and Champions League finals,” explains Andy Beale, chief engineer, BT Sport. “For CL and Europa League matches it is regional broadcasters who are responsible for the host broadcast of each home game, but UEFA takes a much greater responsibility for the finals.”

Normally the host broadcaster would be required to produce the OB in a traditional way – with separate HDR and HD SDR workflows, separate buses and paths and SDR replays with everybody on site and in lots of trucks.

But when BT Sport sat down (virtually) with UEFA in February it indicated that as Belfast was a plane ride away from London they’d like to avoid sending the usual complement of crew both for COVID-safe and sustainability reasons.

“UEFA were really onboard with that idea. We could prove that we’d been doing very successful single stream HDR on all domestic CL games since 2019 so we proposed doing the same for the Super Cup,” he says.

“It was really good to have their trust and their blessing to do that.”

In essence this means that from a single UHD HDR 4K layer all the feeds are derived including HD HDR (which UEFA terms ‘X’ and ‘Y’ for main and reserve feeds) plus 4K SDR and 4K HDR.

BT still sent three trucks to Belfast (these are Telegenic T21, T23 and T25) but with substantially fewer crew. The trucks include the main host broadcaster truck, a services truck to service those multilateral broadcasters who are not on site (it doubles as a backup to the host vehicle) and a presentation truck.

“The trucks are really populated by roles we consider to be critical,” adds Beale.

In the main match truck there was matchday director Rob Levi, the vision mixer and producer. The services truck was crewed by just half a dozen engineers to guarantee production.  The prez truck had no-one in it at all.

All the VT crew were back in London. The entire BT Sport production crew were in galleries at BT’s ROC in High Wycombe including director (Gemma Knight), VM, replay operators, producer, PA, analysis and Piero op working remotely.

BT Sport talent were on site presenting from a platform in a corner overlooking the pitch supplemented by pitch-side reporters so there would be no difference in production value from any major final.

BT Sport’s obligation to UEFA is to deliver an HLG variant – pretty much the standard for live – while also offering rights holders the chance to take SR Live (SLog3).

“We are able to cut variants from the SLog3 including what UEFA call a Z2 HDR HLG feed distributed by the EBU, a 4K SDR and all the HD variants that come out of that. There are rights holders on site taking the SLog natively and others taking HLG.”

The workflow employs BT’s standard ‘closed loop shading’ technique in which all racks engineers shade on the SDR output from the camera. There’s consistency in that all the cameras are Sony. Camera 1 is the F55, which Beale says gives the best noise performance due to its large sensor combined with multiple 2/3in Sony 4300 systems cameras.

“The shaders have that as the SDR as their main feed but they are touching down on the HDR camera shading panel – that way we know the SDR is as good as it can ever be. They also see the programme output coming back in which is the down-mapped HDR to SDR. So, they are always comparing native SDR with the roundtripped closed looped HDR to SDR pictures to make sure they look exactly the same.”

This is a technique that BT Sport has deployed successfully for hundreds of Premier League games over the past three seasons.

“It gives us the opportunity to be really efficient and assurance about picture quality that will completely protect SDR  deliverables. Of course, 95% of the audience worldwide are still watching HD SDR.” 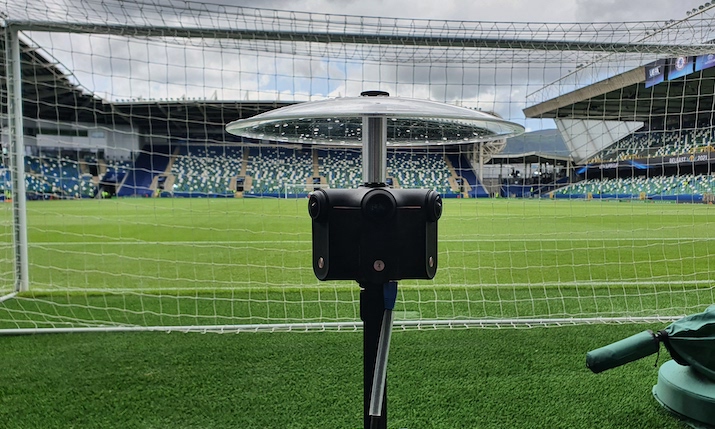 Thirty cameras were deployed for the match

The camera inventory is as you’d expect for a final: 30 match positions including an aerial batcam (there’s no helicopter). BT Sport deployed nine additional presentation and ENG cameras for production of shoulder programming (a behind the scenes story will be aired following the event).

Windsor Park itself is a bit of a greenfield for UEFA. As it doesn’t hold regular first class soccer fixtures, a lot of fibre had to be run and a cable gantry had to be built for this game. BT Sport’s crew began the build nine days out, with the trucks arriving a week before and matchday crew five days ahead of kick-off.

BT’s own feed was returned to London over dual redundant 10Gig fibre plumbed for the occasion by BT Media and Broadcast. BT Sport Host Broadcaster services is returning straight to Stratford and on to BT Sport’s playout partners as well as supporting the EBU with multilateral services.

It’s likely that the Super Cup workflow will become standard for all UEFA Champions League content.

“I think this will be the start of a big transition for them,” Beale says. “They’ve had good reasons to be fairly conservative. They have valuable rights to protect but we’ve been working with their engineering team and everyone is really excited to be pushing things forward.”

UEFA also has an ambition to use more remote technologies and methods to attain sustainability targets and simply to be more efficient in production. It’s also a marked difference from the recent Euros which was a hybrid of traditional matchday OB with presentation elements remoted.

“As a rights holder with competitions internationally, going remote is a huge opportunity,” Beale says. 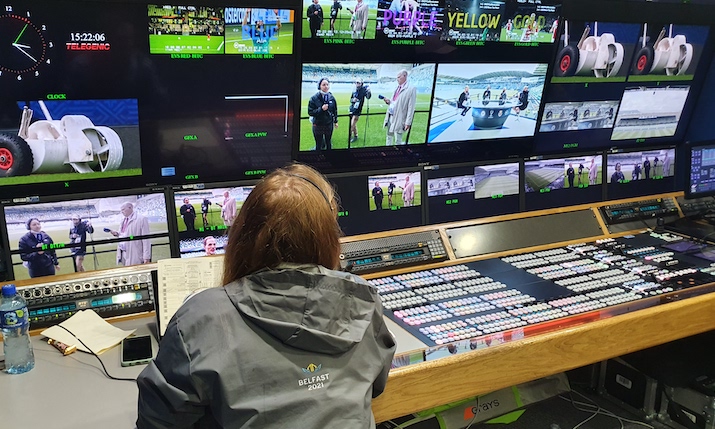 Other notable BT-specific innovations at the Super Cup include 8K virtual reality. This curated feed is being produced from five 8K VR camera rigs and represents the first time BT has produced 8K VR from a CL match. BT plans to transmit at least one 8K VR package per round of CL matches this season.

Another first for UEFA is the use of virtual perimeter board replacement with at least two rights holders in international territories (one of them China) airing live feeds showing different pitch-side advertising.

Beale is also excited about the debut of BT Sport’s new production hub in Stratford. Outfitted with an ST-2110 IP core, the facility will enable what Beale calls “full fat” remote production and has been dubbed Purple Rock to fit in with the broadcaster’s branding.