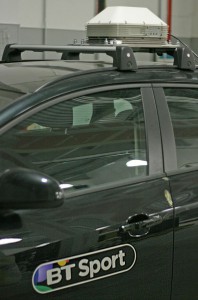 LiveU has announced that BT Sport has chosen its cellular uplinking technology to create Europe’s first cellular newsgathering (CNG) fleet of vehicles. The deal has been led by LiveU’s UK partner, Garland Partners.

BT Sport has worked with LiveU and Garland Partners to equip three Vauxhall Astras with the LU500 and Xtender remote antenna technology. Each LU500 backpack unit can be connected wirelessly (up to 1,000 ft/300 meters) or via Ethernet to the Xtender that sits on top of each vehicle.

Andy Beale, chief Engineer with BT Sport, said: “We now have a fleet-footed and effective way of allowing sports journalists to get the story back to us. We value the flexibility and speed of deployment of the LiveU solution.”

The units can be accessed and controlled remotely via LiveU Central, the company’s management platform that allows full control and monitoring of the LiveU units and content via any browser-supported computer or tablet, from anywhere around the world.  LiveU’s LU500 has taken the cellular bonding market by storm with its next-generation technical strength and outright performance in the field. Weighing around 1 kg (2.2 lbs), this small-sized unit is powered by LiveU’s new multi-processor video encoding engine and fourth-generation patented bonding algorithms.

Samuel Wasserman, LiveU’s CEO, said: “We’re very excited to be working with BT Sport on such an innovative and exciting project. From the outset, cellular bonding technology has been used across the sports broadcasting universe to create a far more rounded and dynamic viewer experience. CNGs are growing in popularity around the world because of the advantages our cellular bonding technology offers. LiveU’s LU500 was used extensively in this year’s FIFA World Cup and Sochi Winter Olympics, often combined with Xtender technology, to bring otherwise impossible live footage to viewers everywhere.”