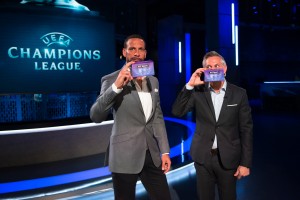 BT Sport has announced that it is giving away free Virtual Reality (VR) Google Cardboard headsets to football fans ahead of the UEFA Champions League Final, which will be available in 360° VR on Saturday, 3 June.

For the first time ever the UEFA Champions League final will be available through a number of 360°streams via YouTube and also in a new BT Sport Virtual Reality App, which allows viewers to choose between a 360° produced programme with commentary and graphics, or select their own camera viewpoint* and all for free.

BT Sport is filming the game using 360° cameras, allowing viewers to watch the game as if they were pitch-side or sitting in the crowd watching the two European giants Real Madrid and Juventus battle it out in Cardiff.

Football fans can register to get the free Google Cardboard from the BT Shop online from today or from EE stores throughout the UK from Tuesday, 23 May. BT will also be giving them away at London Waterloo, London Liverpool Street and Birmingham New Street stations on Friday 2 June, and also from the BT Sport stand in the UEFA Champions Village in Cardiff Bay across the weekend of the final.

BT is once again making this season’s UEFA Champions League available in as many ways and to as many people as possible for free; Freeview on BT Sport Showcase HD, BT TV, Virgin Media, Sky, live on BT Sport’s YouTube channel; the BT website; and the BT Sport App, which provides extra statistics, angles and exclusive content.

The UEFA Champions League final can also be enjoyed this year using the latest broadcast technology, giving viewers the best pictures and the best sound experience available, with the game available for the first time in 4K UHD on YouTube* and 4K UHD with Dolby Atmos sound on BT TV.

Pete Oliver, managing director, BT Consumer, said: “We’re delighted to be giving people the chance to get their hands on these headsets for free, enabling our viewers to get even closer to the action. This is the biggest club football match in world football and fans and viewers will be able to experience it on BT Sport in the most innovative and exciting way as the two footballing giants Juventus and Real Madrid take on each other for European glory.

“We believe that VR can offer our viewers an immersive second screen view which will enhance our coverage. We’re excited to be broadcasting what we believe to be the biggest multi-camera live 360° sporting event ever for the first time to our customers.”

People wanting to order a headset they can either visit the BT Shop, enter their details on www.btsport.com/vr and BT will post it out for free (order before Tuesday 30 May), or visit an EE shop and request a headset up to the day of the game and while stocks last. The game can be watched in 360 Virtual Reality without a headset; viewers just need to download the new BT Sport VR app from their app store.