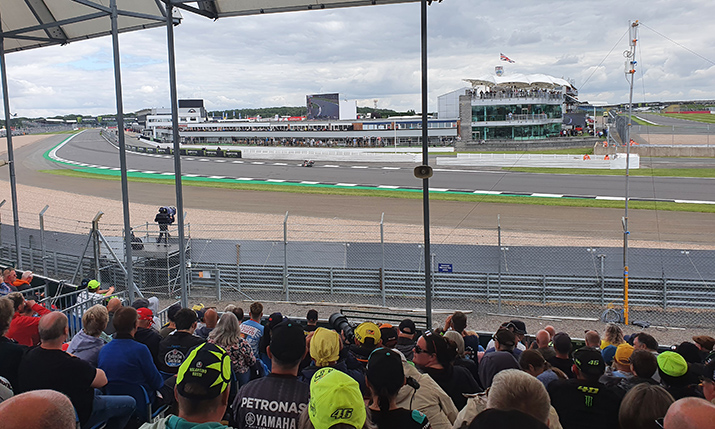 Trials of sports media innovations like augmented reality (AR), 8K and 5G have been delayed by the pandemic, but as crowds and crews get back to the stadiums, tests are starting up once more.

The leader of the pack – in Europe at least – is BT Sport which has plans for all three technologies in the works.

At the recent British Grand Prix, MotoGP at Silverstone [Sunday 29 August], BT Sport was able to advance the 5G part of its plan in concert with long-standing motorsport partner, MotoGP, and bag a world first in the process.

“We’ve been talking with MotoGP and rights holder Dorna about exploring 5G and how it can transform some of their workflows,” explains BT Sport chief engineer Andy Beale. “There’s a real-world problem to solve. Increasingly the wireless bandwidth traditionally used for radio cams and mics is being squeezed out and so reclaiming some of the public 4G and 5G spectrum is potentially a good way of solving reduced frequency count.”

BT Sport embarked on a project with Dorna to explore whether 5G was a viable use case as replacement technology for radio cameras in the pit lane and paddock.

Also in the consortium were RF partner Vislink and the University of Strathclyde, which has a 5G lab. The aim was to build a standalone 5G network and explore its potential during live broadcast.

“We didn’t believe the main 5G network at Silverstone would support the required quality of service,” Beale says. “With 60,000 fans, a large circuit area and just one 5G cell we didn’t think it would be reliable.” 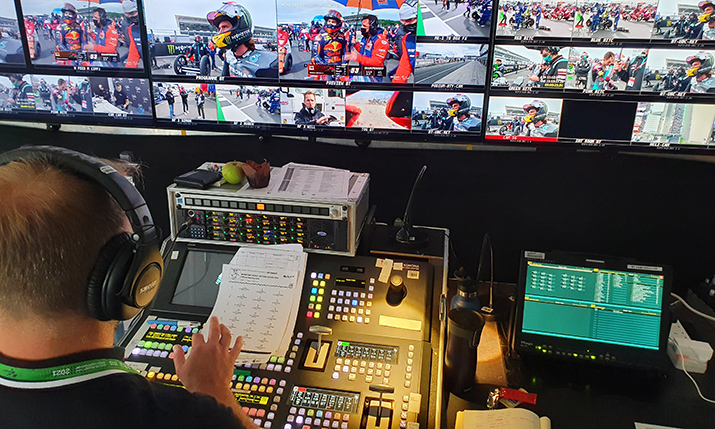 University of Strathclyde built a bespoke, private 5G network for BT Sport to use at MotoGP at Silverstone

So, the University of Strathclyde built a bespoke one. “A standalone network uses the same principals as a non-contested private network, which is why they think it’s a world’s first,” Beale says. “It’s part of a wider project basically looking at 5G tech longer term as a replacement for traditional coded orthogonal frequency division multiplexing (COFDM).”

For the British GP 5G trial, Vislink customised a version of its H-Cam transmitter that clips to the back of a camera and built a 5G transponder on that for use in the pit lane before the race. These pictures went to air on the International Programme Feed (world feed) and were also clipped into BT Sport’s live coverage.

“That was used very extensively and successfully up and down the pit lane,” says Beale.

The small cell built by Strathclyde Uni was rigged on the outside of the circuit and, unlike traditional hardware based, specialised and proprietary cells from the likes of network operators Nokia, Ericsson and Huawei, this was built entirely in the CPU as a software-defined network.

Beale adds: “This is a CPU-run 5G cell running virtually (apart from the physical antenna,) on local equipment, and that’s important as we do more and more remote productions and start taking feeds into the cloud.”

As a next step, BT Sport will take it fully into the cloud.

Vislink also built a ‘militarised’ version of the transmitter/transponder for mounting on the back of the media bike, pictures from which are made available for rights holder to use for features.

For BT Sport at Silverstone, former world superbike champion-turned-pundit, Neil Hodgson, rode around the track on the Thursday before race day commentating on the lap.

“5G cells have a lower footprint than 4G [meaning more of them are required to cover large areas] so we knew the 5G coverage wouldn’t work for the whole lap, but it did work for the section the 5G cell was on,” he says.

That’s important because the tests were made at various speeds from 100kph to 180kph.

“What we’re hoping as an industry is that, with 5G, we can use more consistent frequencies which should make it easier operationally for rights holders and broadcasters”

“We’re pleased it still did a pretty good job,” Beale continues. “The signal has to authenticate when it arrives on the cell so when the bike is going top speed you do lose a bit of track while that handshake takes place, but it kept a clean signal all the way around the complex before it was lost into the start of turn one.”

For Dorna, the issue is that at every circuit it attends around the world, the bandwidth for radio cameras and mics is wildly different. So the team has to have kit that works in all these frequencies and as that bandwidth gets compressed it becomes harder and harder to make all those work reliably.

Dorna has around 90-plus radio cameras, let alone radio mics and talkback, each weekend. Beale says: “What we’re hoping as an industry is that, with 5G, we can use more consistent frequencies which should make it easier operationally for rights holders and broadcasters. The 5G spectrum has a much more consistent specification worldwide.” 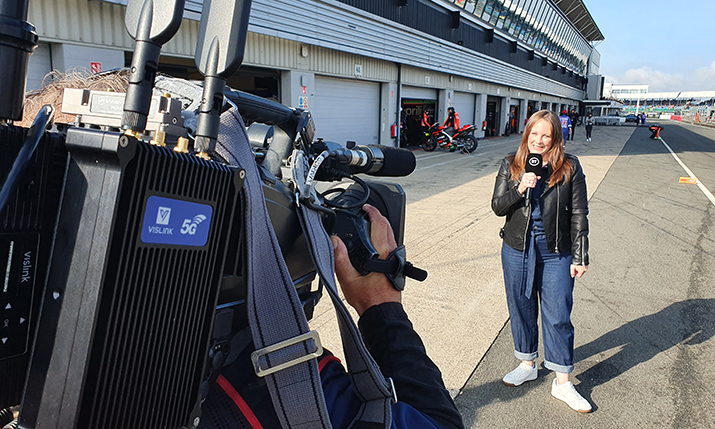 Extensive 5G live production will require network slicing, which is the ability for a broadcaster to licence and hive off a part of the spectrum for the duration of an event.

“That’s still not available unfortunately,” says Beale, who attributes the tardiness of its standardisation to COVID. “Slicing would enable us to safely join a public network without contention but we’re still waiting for that to arrive. That’s why we’re using a standalone network to give us the same effect.”

That said, the advantages of the standalone model are not great for either editorial or cost reduction. That will only come with full network slicing.

“At the moment we are still rigging a standalone network much like COFDM network. The benefits will come when we can licence the public 5G network,” he adds.

“But we’ve proved we can build a standalone network and successfully connect cameras to it.”

“At the moment we are still rigging a standalone network much like COFDM network. The benefits will come when we can licence the public 5G network”

BT Sport is set to perform a further trial as part of the IBC Accelerator programme in December and also has its eye on use cases pitchside in rugby.

The IBC Accelerator programme includes Al Jazeera, BBC Sport, BT, Olympic Broadcasting Services, Multichoice and Supersports. It hopes to showcase elements of a live sports production over a 5G sliced network, “with glass-to-glass latencies that can match those of a traditional broadcast solution, in the region of 100ms 120ms”.

There is, however, still plenty of work to be undertaken before those targets can be reached.